The team returned to Daytona for the Roar Before the Rolex 24 with a brand-new race car and took the honors of running the fastest lap on Sunday, the final day of the three-day test session. Richard Westbrook from the UK – who avoided injury in the November incident – led the Prototype (P) competitors with a lap of 1:39.748 (128.484 mph) in the No. 90 Spirit of Daytona Corvette DP he co-drives with Michael Valiante and Mike Rockenfeller.

“We’re really happy with the test, especially after the accident here in November,” Westbrook said. “That was the worst possible start for our 2014 campaign. Ironically, it’s helped turn everything around. Now, we’ve got a brand new car, the guys are on top of it, and I’ve got two great teammates. It’s still early, but we had a fantastic, trouble-free test and a nice car. Daytona is a fantastic place to drive when you have a nice car. 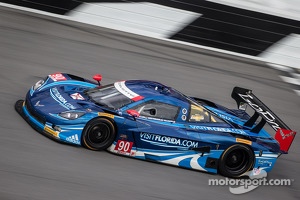 Teams have less than three weeks to make final preparations for the 52nd Rolex 24 At Daytona before opening practice and qualifying on Thursday, Jan. 23. The race takes the green flag at 2:30 p.m. that Saturday.

Christian Fittipaldi turned in the fastest lap of the three-day test on Friday, when he braved chilly conditions to run 1:38.630 (129.940 mph) in the No. 5 Action Express Racing Corvette DP co-driven by Joao Barbosa and Sebastien Bourdais. Sunday’s test was held under sunny skies and nearly 40 degrees warmer.

“This is my first time at Daytona,” Guasch said. “I learned how the track went by practicing on a simulator, but I’ve got to admit it was pretty exhilarating driving on the high banks for the first time. We’re still sorting out the car for Daytona, because this is our first time here, but we’re very close.

“The Rolex 24 is going to be a real tough race. The other teams are bringing their big guns out, but we are bringing ours, too. You don’t have to be the fastest here. You’ve got to be good and quick – and the least unlucky.”