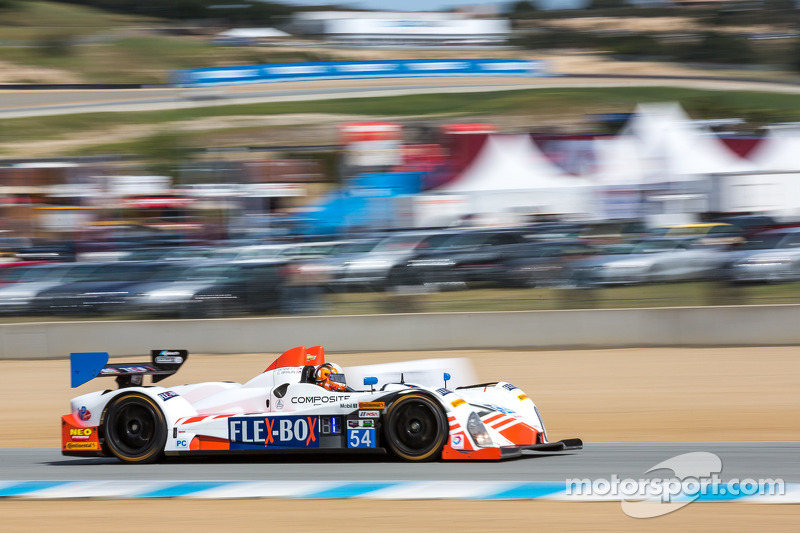 A lot has gone right for No. 54 CORE autosport ORECA FLM09 co-drivers Colin Braun and Jon Bennett (in photo) through the early stages of the 2014 TUDOR United SportsCar Championship.

That trend continued in Saturday’s two-segment Grand Prix of Kansas in which the Prototype Challenge (PC) machines raced alongside the IMSA Cooper Tires Prototype Lites powered by Mazda series.

Braun quickly leaped from a fifth-place starting spot to the lead just two laps into the 45-minute second segment. Once in the lead, Braun was not seriously challenged on his way to a 4.652-second victory over Renger van der Zande in the No. 8 Starworks Motorsport ORECA FLM09.

“It’s always a challenge, you don’t know how the traffic situation is going to go down,” Braun said. “I was trying to save a bit of my tires for the end of the race, in case we might have a late race caution.

“I tried to build a good enough gap to not take too many risks. It’s an unknown for us how the Lites cars are going to handle the traffic; it’s all new to them. I thought they did a great job overall. I wouldn’t say I felt a tremendous amount of pressure, but they didn’t hand it to us, that’s for sure.”

It was the third victory in four PC races this season for Braun and Bennett. The duo opened the year with a Rolex 24 At Daytona victory alongside co-drivers James Gue and Mark Wilkins, and teamed with Gue to make it two in a row in the Mobil 1 Twelve Hours of Sebring Fueled by Fresh From Florida.

Bennett – who missed all three of Friday’s practice sessions to attend his son’s graduation ceremony in Rock Hill, South Carolina – qualified the No. 54 machine fifth for the first 45-minute segment, a position he maintained throughout the segment.

“It’s been a surreal weekend for me,” Bennett said. “My son graduated high school on Friday night. I knew this was coming for a while, and I absolutely had to be there, so luckily I was able to catch a magic carpet from Charlotte at 7:30 and make it here with about 20 minutes to spare. We did a lot of simulation of Kansas and then got in the car and had a reasonable qualifying effort, so I was really happy about that.

“My race was quite eventful with a lot of spinning cars. We were patient, and ended up with a top-five position. I knew that would be a great launching pad for Colin. In many ways, it was a wire to wire race for us. It’s great to be back, that’s for sure.”

Second place went to van der Zande and co-driver Mirco Schultis in the No. 8 entry. The Starworks teammates entered the race carrying momentum from their victory at Mazda Raceway Laguna Seca last month.

Sean Rayhall and Luis Diaz finished third in the No. 25 8Star Motorsports ORECA FLM09. Rayhall took the lead on the opening lap of the first 45-minute segment earlier Saturday afternoon and led throughout to win the segment and put Diaz on the pole for the nightcap. Diaz led the opening lap before Braun found his way past.

Next up for all four TUDOR Championship classes is the Sahlen’s Six Hours of The Glen on Sunday, June 29. The race – which will be televised live on FOX Sports 1 – also is the third round of the Tequila Patrón North American Endurance Cup.

8Star Motorsports stands atop of the podium at Kansas Speedway