Speaking ahead of the penultimate round for the IMSA WeatherTech SportsCar Championship’s DPi regulations at Road America this weekend, the open-wheel and sportscar ace described the Cadillac GTP car as “a ton of fun.”

“The car is really exciting to drive,” said Bourdais who along with Renger van der Zande has scored three wins in Ganassi’s Cadillac DPi-V.R this year. “The new powerplant, power units and everything that we have with the new regulations is a different package, a different balance between downforce, grip level and power.

“It’s quite cool and I was really excited to get in the car and quite pleased to see what the car was delivering. You sit in a new car like that, in a completely different environment than what was done before, and obviously you have all the electronics and everything that you have to run through.

“The car was really well born. It just hit the track, we had not done any setup work and it was already quite fun to drive and the lap times were already quite interesting… I was kind of expecting it to be quite different from the DPi and it’s really not all that different at least in terms of feel. Just looking forward to more progress and more miles in that car.”

Asked if it was similar experience to helping develop the Ford GT (also with Ganassi) and the Peugeot 908 prototypes, Bourdais replied, “Every new car is different, but I feel like there are some many more tools these days. Like the car runs complete with gearbox and engine and really pushes avenues to hit the ground running. The car hits the track and it’s already in the window.

“I’ve been part of development phases especially with Peugeot. That was really rough and raw and had to work a lot and make a ton of changes. This was completely different. The car was close and it felt right and it was a ton of fun and I’m looking forward to getting back in it.”

Regarding his and van der Zande’s 2022 prospects with only Road America and Road Atlanta’s 10-hour Petit Le Mans left on the calendar, Bourdais said: “We’ve had a very interesting season with three wins and quite a lot of misfortune. We’ve had a really fast #01 Cadillac and Chip Ganassi Racing has given us some great cars, but unfortunately, we’ve fallen out of too many races to really be in the championship hunt.

“It’s not been the problem of pace; it’s been a question of completing the races without tripping over something or having issues. It’s a shame that we’ve had so many. When you have three blank results out of a 10-race championship, it’s very unlikely you’re going to end up winning. We knew that basically after Daytona and Sebring that we were going to need to have a perfect season from there on out.

“Unfortunately, we had another miscue at Laguna, and at that point it was like you pretty much have to be winning or second and need your opposition to have some serious issues, which hasn’t really happened with the #60. Basically, when we’ve won they’ve finished second or third.

“I’m not the kind of guy who wishes anything bad on anyone; that’s not what I’m saying. At this point, either they are running into some issues in the last two events or it’s pretty much game over [for us] with the advantage in points that they have. We don’t really have our destiny on our hands.

“But we’re going to keep on pushing and going for wins, which we have all season. Hopefully, we’re still in it going into Road Atlanta and then it’s a 10-hour race as the championship-decider, which we’ve seen crazier things happen.” 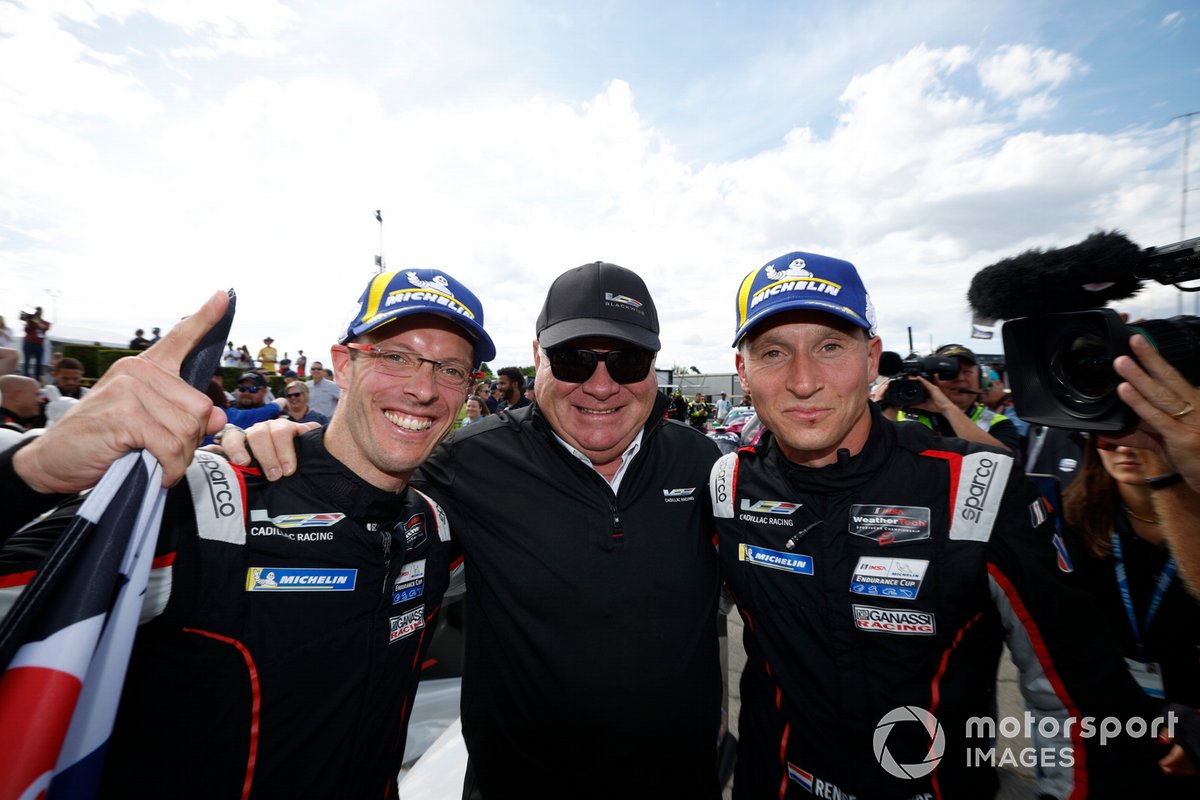 Chip Ganassi with two of his Cadillac aces, Bourdais and van der Zande.

How in-form Bourdais is nailing his "normal transition"