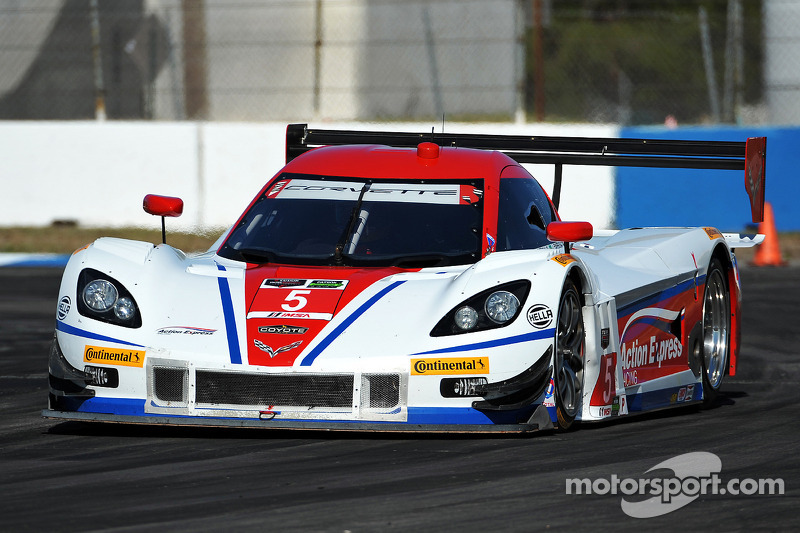 Based on the team’s performance in practice, Sebastien Bourdais didn’t have great expectations for Friday afternoon’s Prototype (P) qualifying.

His main goal was to run a few good laps to get a better feel for the car’s performance.

Bourdais not only met but exceeded that goal, winning the TOTAL Pole Award for Saturday’s Mobil 1 Twelve Hours of Sebring Fueled by Fresh From Florida with a lap of 1 minute, 51.917 seconds (120.303 mph). He took the top spot in the Rolex 24 At Daytona-winning No. 5 Corvette Daytona Prototype co-driven by Action Express Racing teammates Christian Fittipaldi and Joao Barbosa.

“We were not sure where we were going to be, because it was difficult to get in a good lap [in practice] this morning,” Bourdais said. “Traffic was very difficult, and it was tough to get a read on the car because we were always on the line and we couldn’t set a rhythm. It was better in qualifying, because I was able to string together a few good laps.”

The Action Express Racing trio is looking to become the first combination to win both of American endurance racing’s crown jewels overall in the same year since 1998, when Gianpiero Moretti, Mauro Baldi and Didier Theys won both the Rolex 24 and Twelve Hours in the MOMO Ferrari 333SP, joined by Arie Luyendyk at Daytona.

Demonstrating how hard they were pushing, a number of contenders – including Scott Pruett, Scott Dixon, Ricky Taylor and Richard Westbrook – got off course during the 15-minute session.

“That shows how difficult conditions are here at Sebring,” Bourdais said. “A lot of guys made mistakes before they even banked a lap. With a wind like we had today, you get a double-faced car that goes from oversteer to understeer and changes throughout the lap.” Olivier Pla qualified second, running 1:52.086 (120.122 mph) in the No. 42 Nissan/Morgan for OAK Racing co-driven by Alex Brundle and Gustavo Yacaman.

Starting on the second row will be the No. 10 Corvette DP of Wayne Taylor Racing, with Ricky Taylor turning in a lap of 1:52.544 (119.633 mph) co-driving with his brother Jordan Taylor and Max Angelelli. Ryan Dalziel, ran fourth with a lap of 1:52.662 (119.508 mph) in the No. 1 Extreme Speed Motorsports Tequila Patrón HPD ARX-03b/Honda co-driven by Scott Sharp and David Brabham. Fifth on the Prototype grid went to Klaus Graf in the No. 6 ORECA/Nissan from Muscle Milk Pickett Racing. Graf’s best lap was a 1:52.667 (119.503 mph) in the car he is sharing with Lucas Luhr and Jann Mardenborough.

Five teams passed around the Prototype Challenge (PC) pole like a hot potato in Friday’s qualifying for the 62nd Mobil 1 Twelve Hours of Sebring Fueled by Fresh From Florida.

“I had a very good qualifying,” said Junqueira, who earned two PC victories in 2013. “The track was very slippery, but the car behaved very well and I put in a very good lap.”

After several teams took the top spot during the 15-minute session, Junqueira broke out his fastest lap to win the pole by 0.750 seconds.

“I’m surprised I won by such a big margin,” Junqueira said. “This is a big boost to the team morale, and living in Miami, this is my home race. This event has so much history, I’m looking forward to getting a win here that I treasure so much. The story will be different tomorrow, the race is 12 hours and you have to be consistent. Now we will turn the car to race setup tonight so we can last the 12 hours.”

Daytona winner Colin Braun briefly held the pole twice in the session in the No. 54 CORE autosport entry co-driven by Jon Bennett and James Gue, but settled for fourth with a lap of 1:55.660 (116.410 mph). Fifth was the Starworks Motorsport No. 8, with Renger van der Zande qualifying at 1:56.152 (115.917 mph) in the car co-driven by David Cheng, Sam Bird and Martin Fuentes.