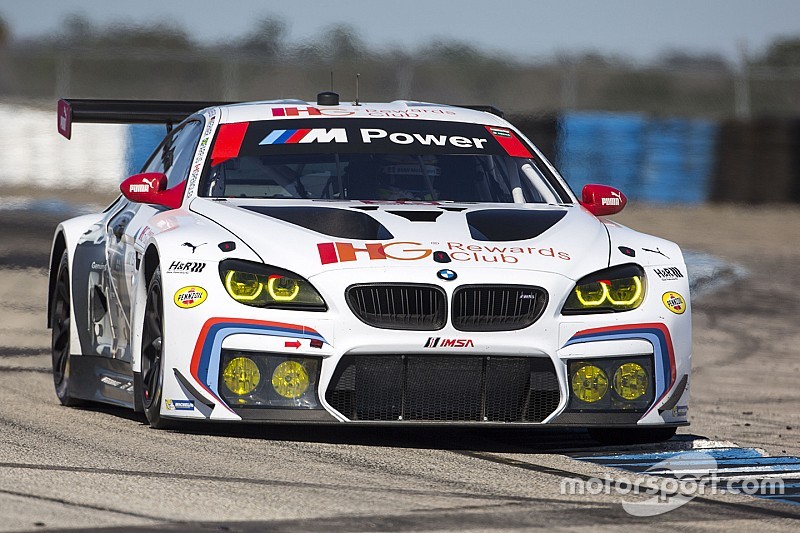 Woodcliff Lake, N.J. – BMW Team RLL has had more success at Long Beach than any other venue that has played host to the IMSA WeatherTech SportsCar Championship. Since its inaugural season in 2009, the team has not failed to finish the race without at least one BMW on the podium at Long Beach. The Bobby Rahal-led team has won the race three times; once with the BMW M3 in 2011 and twice with the BMW Z4, in 2013 and 2015.

The Long Beach contest sets a much different stage than the season’s opening 36 hours of combined racing at Daytona and Sebring. Long Beach is a street course, only 1.968 miles long and, at 100 minutes long, is the shortest race of the season.

We've been on the podium every year and won three times.

BMW Team RLL is looking to the race at Long Beach to celebrate the first win with the BMW M6 GTLM. Introduced at Rolex 24 at Daytona in January, the two new M6 machines showed strength, but succumbed to teething problems with the No. 25 car finishing fifth. The No. 100 car did not finish. At the 12 Hours of Sebring in mid-March the story was a different one as Bill Auberlen scored the class pole in the No. 25 M6, drove the fastest GTLM lap of the race, and finished second with co-drivers Bruno Spengler and Dirk Werner. The No. 100 M6 finished sixth. Both cars totaled to lead the GTLM class for 35% of the race. After two races, BMW stands third in GTLM manufacturer points.

Auberlen, who makes his home only miles from Long Beach in Redondo Beach, Calif., and season-long teammate Werner are looking to carry the momentum from Sebring and duplicate last season’s Long Beach performance - a win from the pole. The duo stands third in GTLM driver points. Ninth in driver points, Edwards and Luhr have had a tougher start to the season, but the pair only needs to add a bit of luck into the equation to better their results.

This year is a historic one for The Ultimate Driving Machine® as Bavarian Motor Works celebrates its 100th anniversary. To mark the occasion both of the M6 machines will race with unique liveries and numbers significant to the marque. The number 100 M6, with John Edwards and Lucas Luhr, looks forward to BMW’s next century with an artistic theme. The number 25 M6, driven by Bill Auberlen and Dirk Werner races in honor of BMW Motorsport’s first season racing in the US in 1975. The car displays images of four significant racing BMWs; the 3.0 CSL, M1, M3 and V12 LMR.

In eight seasons of North American sports car competition, BMW Team RLL has posted 13 victories among 59 podium finishes, winning the American Le Mans Series Manufacturer and Team championships in 2010 and repeating the feat and adding the driver title in 2011. Beginning with the BMW M3 GT2 in 2009, the team successfully introduced the BMW Z4 GTLM in 2013 and expects to continue its winning ways with the BMW M6 GTLM in 2016.

"If you look at our track record in Long Beach, it’s pretty good,” said Bobby Rahal, Team Principal. “We've been on the podium every year and won three times. I think the pace of the BMW M6 right now is competitive. It’s a big car so it's going to be interesting to see if that creates any issues in the tight confines of a street circuit. Based on the reliability, performance and pace of the car so far, we should be in the thick of it. We have had some good strategies in place there over the years that have helped us win so I have every reason to believe we can have another good, strong race."

Bill Auberlen, driver No. 25 BMW M6 GTLM: “Getting the pole and setting the fast lap at Sebring showed the true potential of the new M6. Now we are heading to a race I've won twice in the last three years. I have high hopes for bringing BMW their first win with the all new M6.”

Dirk Werner, driver No. 25 BMW M6 GTLM: "I am looking forward to go back to Long Beach after last year’s win. It is a special track with great atmosphere. We will have to see how much our new M6 GTLM likes street courses and sprint races and we will not have a lot of time to tune the setup. But BMW, the team and of course Bill have so much experience that I am confident for a good result."

John Edwards, driver No. 100 BMW M6 GTLM: “Long Beach will be an interesting race for our M6 since it will be our first street course. BMW had a lot of success with the Z4 on those streets and I’m confident that we have another machine capable of winning its first street race like the Z4 did. Although the M6 is longer than the Z4, the car also has better torque to help us get out of the slow corners, which is key for lap time at Long Beach. Lucas and I have had some bad luck to start the season but the M6 has shown a lot of promise, and I’m excited to start putting in the results that the car deserves.”

Lucas Luhr, driver No. 100 BMW M6 GTLM: “Long Beach is one of the coolest tracks and the venue is very special. It will be the first time for the M6 there but I am sure we will be strong. After the win last year it would be nice to win again in BMW’s 100th year so I’m locking forward to the race. John and I will give 100% to take a good result.”