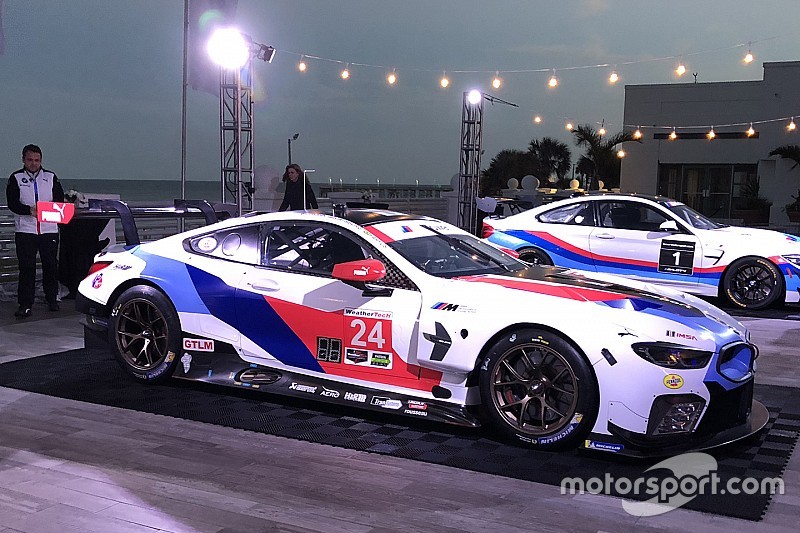 BMW has officially unveiled the livery its M8 GTE challenger will carry in this year's IMSA WeatherTech SportsCar Championship.

On the eve of first practice for this weekend's Rolex 24 at Daytona, BMW showed off a colour scheme incorporating its traditional blue and red stripes and white background at a launch event at the nearby Hilton Oceanfront hotel.

The German manufacturer's two IMSA entries, which face competition from Ford, Corvette, Porsche and Ferrari in the GTLM class, are being operated by long-time partner Rahal Letterman Lanigan Racing.

Taking on full-time driving duties in 2018 in the #24 car are Jesse Krohn and John Edwards, while Alexander Sims and Audi convert Connor de Phillippi share the sister #25 machine.

Crew members from MTEK, BMW's partner squad for the FIA World Endurance Championship, will be in attendance this weekend at Daytona ahead of May's season-opening Spa 6 Hours.

“This is a really special car for us, as it’s the first time that we’ve got involved in the production of a streetcar,” said BMW motorsport boss Jens Marquardt.

“Racing on track this weekend, we are ahead of the streetcar, which launches later this year. We had close contact with production car team; it was a moving target because there are always small changes and adjustments.

“But the streetcar is the driving force, and we had good support from our colleagues to build the first prototype race car. Development of both cars went hand in hand, and the board trusted us to launch the race car first; we’re really proud of that.”

The two BMW M8s were seventh and eighth-fastest in class during pre-qualifying at this month's Roar Before the 24 test, the quicker of the two ending up 1.4 seconds slower than the pace-setting Ford GT.

BMW was subsequently handed a 10kg weight break and an increase in boost as part of a raft of post-testing Balance of Performance changes.