The duo proved to be a potent pairing, scoring victories at the Mid-Ohio Sports Car Course as well as Watkins Glen International on the way to fourth in the 2013 season-ending standings. 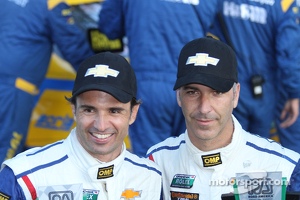 Based in Denver, North Carolina, Action Express Racing won its very first race, the 2010 Rolex 24 At Daytona, and has continued to develop into a championship-caliber organization.

Barbosa and Fittipaldi, who both have victories in the Rolex 24 At Daytona on their extensive racing resumes, joined forces at Action Express Racing four races into the 2013 Rolex Series season. The duo proved to be a potent pairing, scoring victories at the Mid-Ohio Sports Car Course as well as Watkins Glen International on the way to fourth in the 2013 season-ending standings.

“Having Joao and Christian together again should be a very strong combination,” said team manager Gary Nelson. “We saw last season that they not only work well together, but they also have great communications with Iain (Watt, Action Express Racing technical director). We want to build on the progress that the team made last year, and having this line-up for the No. 5 Corvette DP should help us do that.”

As affable as he is fast, Barbosa has been part of Action Express Racing from the start, scoring five Rolex Series victories for the team since 2010.

“I am very grateful to be working with Action Express once again this year, and to have Christian as my co-driver,” said Barbosa. “We learned a lot last year. This team is made up of some very talented people, and everyone on the team is moving in the right direction. We are all looking forward to the 2014 season so it is great to have things in place and to be able to focus on the work we have to do to be ready for the 24 and the rest of the year.”

After racing with Action Express Racing as a guest driver, Fittipaldi joined the team on a full time basis in 2013 and is looking forward to the opportunity to build on that experience next year.

“I’m very happy to be back with Action Express and to be sharing the car with Joao again this year,” said Fittipaldi, who won the 2004 Rolex 24 At Daytona. “Bob (Johnson, team owner) has put an amazing group of people together, and the team continues to improve every weekend. This season there will be some exciting new elements with new tracks and new competition, and I’m excited about being a part of this group and this new championship.”

Action Express Racing will be in action this weekend as the team is set to take part in the opening tests of the 2014 season at Sebring International Raceway (November 16-17) and Daytona International Speedway (November 19-20). The team will make additional announcements in the coming weeks about plans for the upcoming season.