Sean Rayhall set the fastest lap for the team, with a 1:43.226, and teammates E.J. Viso, Chapman Ducote, and Doug Bielefeld finished close behind.

Daytona Beach, Florida – Coming from a three win streak at the end of the 2013 season, BAR1 Motorsports’ strong performance last weekend at Daytona International Speedway for the Roar Before the 24 test showed they are ready for a promising 2014 season in the Tudor United Sports Car Championship. Sean Rayhall set the fastest lap for the team, with a 1:43.226, and teammates E.J. Viso, Chapman Ducote, and Doug Bielefeld finished close behind. 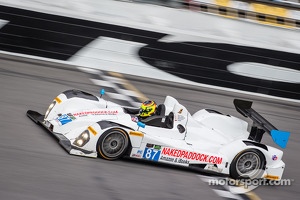 American driver, Sean Rayhall, climbed the charts at Daytona International Speedway finishing 4th fastest overall in the second practice session after leading numerous times during the test. The 18-year-old captured the Cooper Tires Prototype Lites Championship in 2013 and made his Prototype Challenge debut at Petit Le Mans where he finished 2nd with 8Star Motorsports. He also holds 1st in the “Future Stars” category for drivers 21 and younger according to Driver Database. Rayhall will compete with BAR1 Motorsports in the Tudor United Sports Car Championship for 2014.

“I feel the test went well for BAR1 Motorsports as a whole team,” said Rayhall. “The engineers and I made a few good changes but the car was pretty fast out of the trailer. From there, we just worked on small adjustments. I am very thankful for the opportunity to be a part of BAR1 Motorsports and I am looking forward to the 24 Hours, as well as, what the rest of the 2014 season has in store for us.”

IndyCar driver, E.J. Viso, made his debut with BAR1 Motorsports at the Roar Before the 24. Viso most recently competed in the IndyCar Series for six straight years and holds over 20 Top-10 finishes in the series. The Venezuelan driver previously competed in the American Le Mans Series in 2012 with CORE Autosport.

“I am happy to be back in a car after so long and all this time away from the track seems like forever,” said Viso. “It has been over two years since I have drove a PC car when I won the 12 Hours of Sebring in 2012. I am very happy to be back in a PC car and I am very grateful for the opportunity that BAR1 Motorsports has given me. I believe that we have a good driver lineup and I think that we are going to make the other teams work hard. I am looking forward to what the rest of the season holds for me and BAR1 Motorsports.”

Miami Beach, Florida native, Chapman Ducote, is back in the saddle with BAR1 Motorports again for the Roar Before the 24 test after a busy 2013 season helping his wife, M.K. Ducote, launch her new book, Naked Paddock. Ducote has competed in the American Le Mans Series since 2007 and holds 14 American and International Le Mans Series podiums to his name. Ducote will compete with BAR1 Motorsports for the 2014 Rolex 24 at Daytona.

“It’s great to be back in a BAR1 Motorsports car after a busy year helping my wife, M.K. Ducote launch her new book, Naked Paddock,” said Ducote. “The Naked Paddock is a journey through the world of professional motorsports and inspired by real events and the second book, False Grid, will be released later this year. Getting back in the car felt great and I love what the combined series has done for 2014. We had a strong Roar Before the 24 test and I’m excited about the Rolex 24 at Daytona.

Doug Bielefeld, of Dallas, Texas, joined BAR1 Motorsports in Daytona for the Roar after a couple months of testing with the team before Daytona. Bielefeld competed with TRG in the Grand-Am Road Racing Series in 2013 at COTA and holds many National podiums for the Porsche Club of America from the past few years to his name. Bielefeld plans to compete with BAR1 Motorsports for the Rolex 24 At Daytona.

“After many practice sessions before and during the Roar Before the 24, BAR1 Motorsports has done a great job of making a plan and executing it to get a great group of drivers for the Rolex 24 at Daytona,” said Bielefeld. “Everybody on the BAR1 Motorsports team did a great job, including engineers, coaching, and crew. The crew seemed to have a lot of synergy working around Brian Alder and that was great to see. I appreciate the opportunity to work with BAR1 Motorsports and I am looking forward to our future together at the Rolex 24 at Daytona.”

After having a strong Roar Before the 24 test and coming from three-straight wins in 2013, Brian Alder, Team Owner, was very pleased with his drivers performances and is looking forward to the Rolex 24 at Daytona.

“I am very happy with the overall results at the Roar Before the 24 test,” said Alder. “We had a great group of drivers testing with us and the crew did a great job of providing us with good cars. The team has a lot of potential for the 2014 season. I am looking forward not only to the Rolex 24 at Daytona, but the season as a whole.”

The Tudor United Sports Car Championship will compete in the Rolex 24 at Daytona on January 25th and 26th.