Who will be wheeling the BAR1 cars at Sebring?

BAR1 Motorsports will compete in the 12 Hours of Sebring and remainder of the 2014 TUDOR United SportsCar Championship season with dual PC entries. Team owner, Brian Alder, comes from a background with extensive endurance experience, and 3 class wins at Sebring under his belt. Alder’s experience with endurance racing will guide the team throughout the second endurance race of the season.

“Sebring is a tough race, 12 hours around this track is tougher than 24 at Daytona or Lemans,” said Alder. “To win this race it takes a bullet proof car and consistent laps by all the drivers. Similar to Daytona, the team that can keep the car on the track will be in prime position to fight for a win in the last 2 hours of the race.”

The lineup of drivers that Brian Alder and BAR1 Motorsports have assembled holds a diverse and extensive background that will benefit the team throughout the 12 hours. After an race incident at the 2014 Rolex 24 at Daytona, BAR1 Motorsports is returning with a similar group of drivers and a couple new faces.

American Driver, Gaston Kearby, will return with BAR1 Motorsports for 12 Hours of Sebring after competing with the team at the Rolex 24 at Daytona. The Texas native has previously competed in SCCA Formula Atlantic where he holds the Mid State 2013 Majors Champion Title with six Top 5 wins, National Auto Sport Association, and Sportscar Vintage Racing Association.

“We had a great run at the Rolex 24 at Daytona, although it wasn’t the results we were looking for,” said Kearby. “The car was quick from the beginning and the team was great to work with. The Rolex 24 at Daytona was my first race in a PC car and I am eager to see what we can do at Sebring. Brian has a diverse group of drivers for the race and I am happy to be a part of it. I am looking forward to being back with the team for the 12 Hours of Sebring and I am hoping for a successful race.”

American driver, Bruce Hamilton, will join Kearby and Kasemets in the #87 GK Motorsports/K-Hill Racing car for the 12 Hours of Sebring. Hamilton has previously competed in the USF2000 Championship, SCCA Pro Racing in Formula Atlantic, and holds over five years of experience in SCCA Formula Atlantic.

“Sebring is one of my favorite tracks and I’ve had the opportunity to race many laps here, albeit most have been in open wheel cars, and never in an endure,” said Hamilton. “Driving for BAR1 will be a new experience for me, as will be driving the #87 Oreca FLM09 LMPC car. Brian has a strong team with a winning history so I expect I’ll be in good hands. Driving with Gaston and Tonis will make a great team. I’m very happy to have the opportunity to co-drive with my good friend Gaston Kearby. He’s a proven winner and will be a strong asset to our driver team. As our anchor driver, Tonis Kasemets is not only a very experienced pro driver with a wealth of knowledge in all types of race craft, but his coaching, engineering, and car set up skills will be a huge additional asset to this team. K-Hill Motorsports will be assisting the team again, as they did at Daytona. Kris Kaiser and crew will ad the depth that we can draw on as a team when the going gets tough….and at Sebring it always does!” 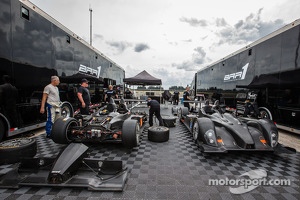 Estonian and American driver, Tonis Kasemets, will make his return with BAR1 Motorsports at the 12 Hours of Sebring after competing in the Rolex 24 at Daytona with Kearby as one of his teammates. Kasemets recently competed in the Grand Am GS Championship in 2012 and 2011 and Atlantic Championship, USF 2000 championship, Grand-Am Rolex series, Continental Tire Sports Car Challenge and numerous Indy Lights races from 2008 to 2011.

“After an unfortunate turn of events at Daytona I am looking forward to returning with BAR1 Motorsports,” said Kasemets. “The Rolex 24 at Daytona was my first LMOC race, but it felt so good and I was immediately very comfortable in the car. I am very excited to be a part of the 12 Hours of Sebring with a team that has a great list of drivers. I am looking forward helping my teammates getting to the finish line in front. Thank you to every one who made this race possible for me and BAR1 Motorsports, especially the “One Hand Wonder.”

Hollywood, California native, Tomy Drissi, will return to BAR1 Motorsports after a successful 2013 season with the team. The American driver made his debut in the American Le Mans Series in 2013. Drissi boasts an extensive and diverse racing background that includes NASCAR Nationwide and Sprint Cup Series’, K&N Pro Series West, Trans-Am Series, and Speed World Challenge. “It’s great to be back with BAR1 Motorsports after a successful 2013 season with them,” said Drissi. “I’m really looking forward to running at such a historic racetrack with the exceptional group of drivers that Brian Alder has assembled.” Tomy gave the following explanation for the ‘Papa’ decals on the No. 88 car. "Like many of us, my parents provided me with the work ethic and values that helped me get to where I am today. My dad is 91 now and a big race fan. Having 'Papa' on the car is just a way of acknowledging what he means to me." Miami Beach, Florida native, Chapman Ducote, is back in the saddle with BAR1 Motorports again for his first race of 2014 after a busy 2013 season helping his wife, M.K. Ducote, launch her new book, Naked Paddock. Ducote has competed in the American Le Mans Series since 2007 and holds 14 American and International Le Mans Series podiums to his name.

“It’s great to be back in a BAR1 Motorsports car after a busy year helping my wife, M.K. Ducote launch her new book, Naked Paddock,” said Ducote. “The Naked Paddock is a journey through the world of professional motorsports and inspired by real events and the second book, False Grid, will be released later this year. I am happy to be starting my 2014 season at Sebring International Raceway, which is a track that is near and dear to my heart. Sebring was my first American Le Mans Series and professional podium and I would like to revisit the podium again this year. I’m excited to be paired with Martin Plowman and although we have never been teammates, I know we will get along well. I am ready to get the week started and see what BAR1 Motorsports can do at the 12 Hours of Sebring!”

Doug Bielefeld, of Dallas, Texas, joined BAR1 Motorsports earlier in the season for the Roar Before the 24 and Rolex 24 at Daytona after a couple months of testing with the team. Bielefeld competed with TRG in the Grand-Am Road Racing Series in 2013 at COTA and holds many National podiums for the Porsche Club of America from the past few years to his name. "As I prepare for my second race with BAR1 Motorsports, I remain impressed and excited about the quality of this race team,” said Bielefeld. “It's exceptional management and the calibre of the driver lineup is great. Working with a gentleman like Martin Plowman is going to be a high point for me this year! I'm excited to get back in the car and see what we can do at Sebring!”