Auberlen "fed me a door," but Hand doesn't fault him for that 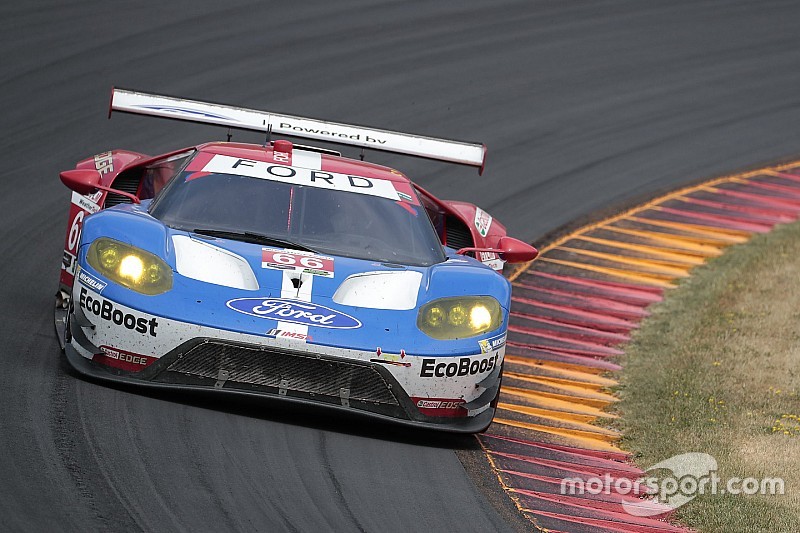 Former BMW teammates Joey Hand and Bill Auberlen found themselves in a heated battle for second in the closing stages of the Sahlen Six Hours of the Glen.

Hand was running third, attempting to get Chip Ganassi Racing and Ford a 1-2 finish on the heels of their Le Mans triumph.

Hand and Auberlen have known each other for some time, and even spent some time as teammates and co-drivers at BMW.

"First of all, you got to know who you're driving with and that particular car was Bill Auberlen, someone I know very well. I spent a lot of years racing him and learned a lot from that guy. I was going up against a master there," said Hand.

With how difficult passing seemed to be on the new surface, Hand felt he needed to mislead the veteran racer.

"I thought he knew what I was going to do and I gave him a taste of it a couple times; I showed him an outside-in. But when it got down to that time, I decided that he thinks I'm going to go outside-in, so I'm just going to go deep on the outside and chop across his nose."

But when he actually made the daring move, it got sketchy as the No. 25 RLL Racing BMW slid up the track towards the No. 66 CGR Ford GT.

"All he could do was let off the brakes and roll into me a little bit. I would have done exactly the same thing. Absolutely, 100% respectful racing with him. He definitely fed me a door, which I was totally expecting. And I am sure I kept a tire on the rumble strips so there were no track limits issues. But when you get forced out wide, it doesn't matter anyways."

There was no investigation from race control regarding Hand and track limits, so it's safe to assume he is in the clear there after completing the pass. At the checkered flag, he was 3.2 seconds back of his GTLM class-winning teammate and eight tenths clear of Auberlen.

The California-native concluded, "We're here to put on a show and the people standing in the corner right there, they got a damn good show!"