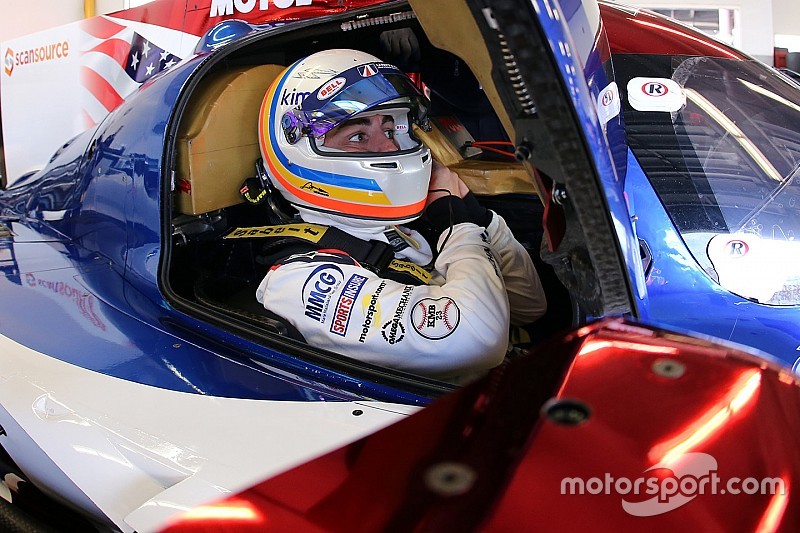 Fernando Alonso has admitted he was alarmed by the braking issues in his United Autosports Ligier that caused him to loop into a spin at Turn 1 during the Rolex 24 Hours at Daytona.

The two-time Formula 1 World Champion, making his Rolex 24 debut, said that while he had a “positive feeling” about his first experience of racing at Daytona, the braking issue had been an eye-opener.

“Luckily at this track you have a shortcut. At night you don’t see clearly the tire wall and where is the escape road. So that was even more scary!

“You try to bring the car back to the garage because in an endurance race this can happen and the mechanics will sort the problem.”

Although the car suffered a recurrence of the brake problem, despite a master cylinder change, Alonso said he was encouraged by how much faster the Ligier had been in the race than in testing or qualifying.

He said: “It was a very nice experience, the whole event – the test, the quali, the restarts, the stints, the fatigue at night, the transition from night to day… It was very nice being on track at that time. I really enjoyed the traffic management, the car itself.

“Maybe the nicest thing was how competitive we felt. Because we entered the race with no high hopes because we were never competitive and suddenly we picked up the pace and everyone was smiling in the garage. So that was a nice feeling.

“Into the night it was a very good part of the race. The car felt quite competitive. It was a surprise because we were not very competitive in practice three weeks ago, and we were not competitive this week in pure laptime pace.

"In quali we were 13th and 15th but then in the race this changed and we were probably in the fastest three cars on track when we were running.

“Unfortunately we had too many issues that were out of our control, some unlucky situations – first of all with the puncture in the third or fourth stint. There were five cars on the lead lap and we were the fifth of those and then with the puncture we lost four laps, with quite a lot of damage on the car.

“We recovered two laps – also thanks to the safety car – and after that we had a brake issue, the first time that had happened to the team, and we lost 40 minutes. So that was the end of our race probably. Then we had a throttle issue and again a brake issue.

"Unfortunately also for the team, the sister car that was [running in the top three] had a clutch problem so we probably lost a podium there for United. But this is racing, this is how it goes.”

Alonso admitted a little surprise that United Autosports had hit issues, but stressed again that he enjoyed the Daytona experience.

“They’ve been racing with this car all last year,” he said. “They were at the 24 Hours of Le Mans, they finished fourth, so it’s a car that is well proven, you know? It’s not a new car.

“But you come here and you have issues here and there, so it was a surprise, a bit unlucky, even more for our sister car because it was in the podium [position].

"We could be there; we were even one lap ahead of them in that moment [when the #23 hit trouble] so I think, yeah, we lost an opportunity here.

“But I have a positive outcome, even with all the issues. I really did enjoy it a lot. I love driving and when you drive eight or nine hours in one race, it’s much better than one. It’s a very good feeling driving 24 hours.”