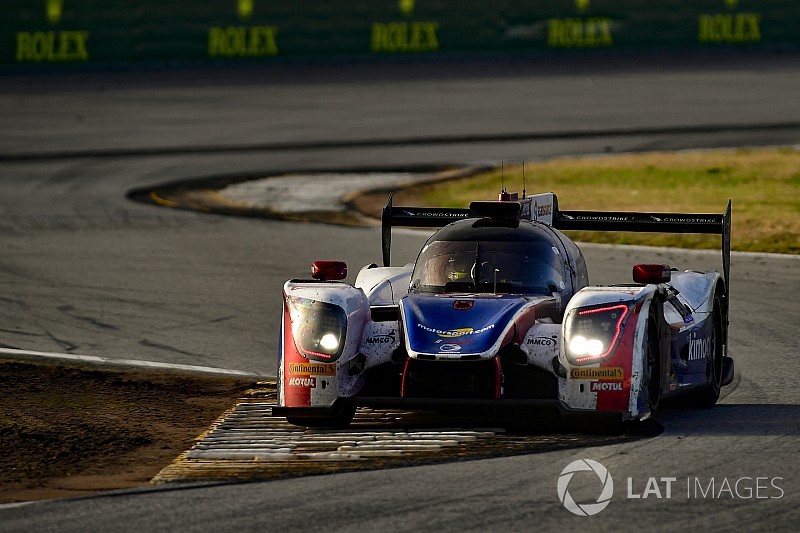 Fernando Alonso has praised Lando Norris for a “very impressive” showing by the McLaren Formula 1 junior in last weekend’s Rolex 24 at Daytona.

Along with Phil Hanson, Alonso and Norris shared a United Autosports-run Ligier JS P217 last weekend, although multiple brake issues and a throttle failure meant the car finished down in 38th overall, 91 laps off the lead.

Despite the Ligier's lack of competitiveness relative to the best of the DPi cars, the trio had risen to as high as sixth place before they dropped outside of the top 20 early in Hour 11 as Alonso suffered a brake failure.

That was partly thanks to Norris's work behind the wheel during his opening stint, when he gained numerous positions during an early evening rain shower that helped mask the deficiencies of the Ligier.

"Really it's not a surprise, but the people who don't know Lando, maybe it was a surprise for them," said Alonso. "The stints he did were very impressive, the teamwork, the preparation, the focus.

"So even in wet conditions, first time in prototype car, first time at Daytona, first time on Continental tyres, he recovered 33 seconds in 20 laps, something like that. He is 18 years old, so that's quite impressive."

The #23 United Ligier led a total of eight laps during the race before the first of its brake issues as varying pitstop strategies played out at the front.

Norris was credited with leading when he brought the car in the pits for the first time to hand over to Hanson in the seventh hour.

"I didn't know what position I was in, it was only when I came into the pits I saw I was P1," Norris said of his opening stint.

"On track on my final lap before I boxed, I overtook my teammate [the #32 Ligier], who I thought was my ahead of me, and I could swear he had the 8 [on the digital readout that shows current position] on the car. But when I entered the pits, I saw I was P1."

He added: "Our pace in the whole race was pretty good in terms of our disadvantage of our actual pace in the car.

"Compared to the Cadillacs and the Acuras, they were miles better in terms of performance. But me, Phil and Fernando did a great job extracting what we could from the car.

"I think we have to be proud of what we achieved as drivers and of the team; the failures are just things that sometimes happen."

Taylor: Rolex 24 was "one that got away" for Penske-Acura