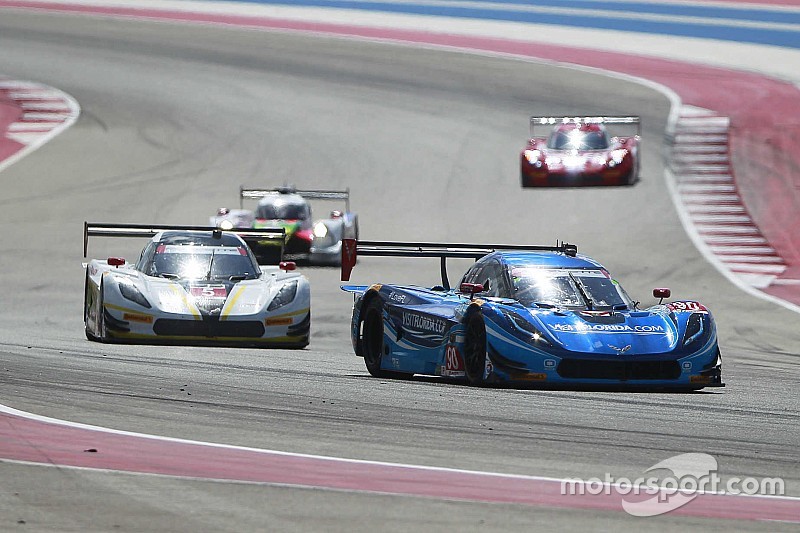 CORE autosport has 12-point lead in bid for PC repeat

Daytona Beach, Fla. – A season-long war for TUDOR United SportsCar Championship comes down to a final, 10-hour battle Saturday at Road Atlanta as Petit Le Mans powered by Mazda will determine who wins championships in all four classes, including Prototype (P) and Prototype Challenge (PC).

The endurance race on the 2.54-mile, 12-turn road course in Braselton, Georgia – which also will determine Tequila Patrón North American Endurance Cup champions – will be broadcast live on FS2 (FOX Sports 2) beginning at 11 a.m. ET Saturday. Live coverage alternates throughout the day between FS2 and IMSA.com.

The lineup of TUDOR Championship stars will be augmented by a number of top racers from throughout the international motorsports world to share co-driving duties in the day-to-night endurance classic.

“Petit Le Mans is like combining a bunch of races into one, and it’s tough having a 10-hour race decide the championship,” said Michael Valiante, who holds a slim, six-point lead atop the Prototype standings. “Anything can happen. We’re glad we are where we are, and I hope to be standing atop the podium at Road Atlanta.”

Valiante and teammate Richard Westbrook in the No. 90 VisitFlorida.com Corvette DP enter the finale leading both Action Express Racing teams, 279-273. They will co-drive with Mike Rockenfeller, and can clinch the title with a top-three podium finish.

“It’s tough any time you’re competing against a top-level team like Action Express,” Valiante added. “They’ve got two cars this year, and they’re really quick. We’re going to have to be on top of our game.”

A year ago, Christian Fittipaldi and Joao Barbosa wrapped up the TUDOR Championship Prototype title with a second-place finish at Petit Le Mans with IndyCar star Sebastien Bourdais, who will rejoin the No. 5 Mustang Sampling Corvette DP lineup this weekend. Dane Cameron and Eric Curran will be joined by Max Papis in the No. 31 Whelen Engineering/Team Fox Corvette DP.

“Petit Le Mans is one of the most challenging races we have of the season and it’s going to decide this year’s champions,” Barbosa said. “We need to be 100-percent focused on the opportunities. It’s a 10-hour race and a lot can happen, so we need to do what we can to have a great race.”

Scott Pruett and Joey Hand are coming off their first victory of the season at Circuit of The Americas in the No. 01 Ford EcoBoost/Riley for Chip Ganassi Racing with Felix Sabates, and take mathematical hopes for the championship into the finale. Boosting their chances is the arrival of Ganassi Racing teammate Scott Dixon, who won the 2015 IndyCar Series title in a come-from-behind victory in the season finale.

The No. 0 DeltaWing DWC13 is coming off its most competitive outing of the season. Memo Rojas led four laps late in the race and was running third prior to an incident in the closing laps. Rojas and co-driver Katherine Legge finished seventh, with the pair joined by Andy Meyrick this weekend. Last year, the team led 17 laps at Petit Le Mans, best in the unique car’s history.

Mazda will return to two diesel-powered prototypes for the finale, with Tristan Nunez, Jonathan Bomarito and Sylvain Tremblay in the No. 70 Castrol/ModSpace Mazda Prototype, and Tom Long and Joel Miller in the No. 07 entry.

CORE autosport drivers Jon Bennett and Colin Braun are on the verge of capturing their second consecutive PC championship. Taking a 12-point lead into the finale, Bennett and Braun will clinch the title with a result of seventh or better in class. The pair won two races and tallied 289 points thus far in the No. 54 Flex-Box/Composite Resources ORECA FLM09, and finished second in last year’s Road Atlanta classic co-driving with James Gue.

Renger van der Zande, a two-time winner this season, will co-drive with Mike Hedlund in the No. 8 Starworks Motorsport Martini ORECA. Conor Daly and James French will be going for their third consecutive podium finish in the No. 38 Ric-Man Construction/GO-PUCK/Braille Batteries entry, co-driven by Performance Tech Motorsports’ Jerome Mee. Another contender is Mikhail Goikhberg, joined by Chris Miller and Rusty Mitchell in the No. 85 JDC/Miller Motorsports Vroom.com/Red Line Oil ORECA.

Others to watch in the PC class include the No. 88 Starworks Motorsport lineup of Scott Mayer and 2015 Sahlen’s Six Hours of The Glen winner Alex Popow, and an as-yet-unnamed lineup in the No. 16 BAR1 Motorsports ORECA.