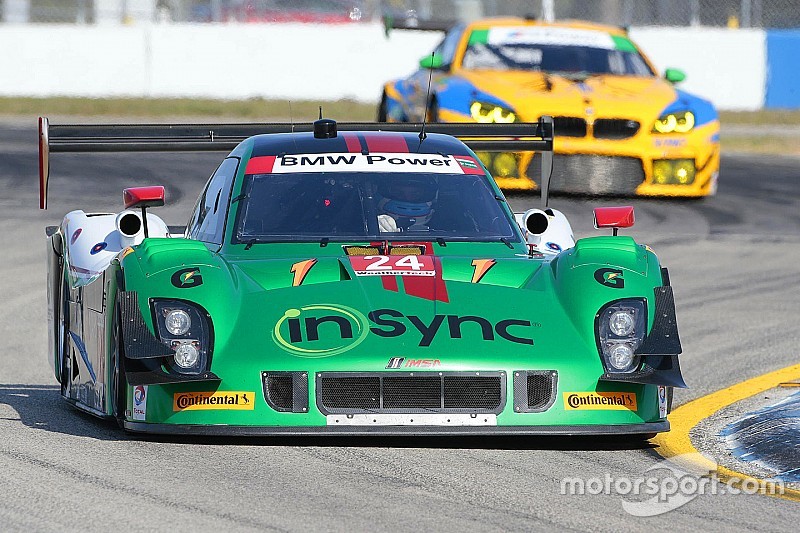 Sebring, Fla., – Saturday's Mobil 1 Twelve Hours of Sebring Fueled by Fresh from Florida at Sebring International Raceway has gotten even more exciting with the addition of Alegra Motorsports' entry in the top class, Prototype. InSync Healthcare Solutions, a leading provider of integrated EMR and practice management software, revenue cycle management services, and medical transcription services to thousands of healthcare professionals throughout the United States, will share in that excitement as the primary sponsor of the Tampa, Fla.-based team's Riley BMW #24.

Being a native of Tampa, I have always looked at Sebring as my home track

The team acquired its Prototype recently from Starworks Motorsports, and the car wasn't ready for the season opener at Daytona. Beginning with Saturday's race at Sebring, Alegra Motorsports plans to compete in the other three races that make up the Tequila Patrón North American Endurance Cup (NAEC), a series within the IMSA WeatherTech SportsCar Championship. In addition to the Rolex 24 at Daytona and Sebring, that series includes the Sahlen's Six Hours of the Glen at Watkins Glen International in Watkins Glen, N.Y. June 30-July 3 and the Petit Le Mans at Road Atlanta in Braselton, Ga., Sept. 28-Oct. 1.

In addition, the WeatherTech SportsCar Championship race at Canadian Tire Motorsport Park in Bowmanville, Ontario, Canada July 8-10 is also on the team's schedule.

At Sebring, NAEC points are awarded at the four-hour mark, the eight-hour mark and at the finish of the once-around-the-clock enduro on the bumpy, 3.74-mile, 17-turn road course. That will add another challenge to the strategy devised by the team's respected manager, Andy Greene.

Lawrence was one of the winners of the NAEC last year in the GTD class. He and Farnbacher also had GTD class victories in the Rolex 24 last year. That was Farnbacher's second Rolex 24 victory, as he also won the GT class at the 2005 Rolex 24. de Quesada joins them as a Rolex 24 class winner, as he was a GT class winner in 2007 in an Alegra Motorsports/Fiorano Racing Porsche GT3 Cup.

Morad doesn't have a Rolex 24 victory yet but he was the American Formula BMW champion in 2007 before other open-wheel success in Atlantics, A1 Grand Prix and GP3. He and 16-year-old Michael de Quesada, Carlos's son, are currently focusing on the tough Ultra 94 Porsche GT3 Cup Challenge Canada series, where Alegra and Porsche Centre Oakville Motorsport field multiple entries. Carlos de Quesada was that series' Gold Cup champion in 2013, and Morad finished second in the top class, Platinum Cup, last year as a rookie.

Additional information is available on the team's Facebook page, AlegraMotorsports.com, imsa.tv and imsa.com. The latter will have live timing and scoring throughout the race.

Carlos de Quesada: "I am happy to be back in a Riley BMW Daytona Prototype for this year's running of the Twelve Hours of Sebring. Being a native of Tampa, I have always looked at Sebring as my home track, and being able to participate in the Twelve-Hour race means a lot to me.

"As for our season, we will be doing selected events this year in the WeatherTech series. Our primary effort is the IMSA Cup Canada, and it will be our fifth year doing so."

Daniel Morad: "It was less than 12 months ago that Alegra Motorsports gave me my first opportunity in sports car racing after an extensive single-seater career in Europe. Now I'm driving a Prototype, which still hasn't fully set in my mind. I have been preparing for this opportunity for a long time and I can't wait for it all to start. I can't thank Carlos de Quesada and Alegra Motorsports enough for choosing me to be a part of what will be an amazing lineup."

Cameron Lawrence: "I am thrilled to make my debut in the Prototype class with Alegra Motorsports at the Mobile 1 Twelve Hours of Sebring. I had the opportunity to test the car at the official test in February and was very impressed with the car and team given the short amount of time they had to prepare for the test.

"It's great being back in a Riley chassis and teaming up with Dominik Farnbacher given our success at the 24 Hours of Daytona last year. We hope to carry that success over to this race, along with our teammates, Daniel Morad and Carlos de Quesada."

Dominik Farnbacher: "Alegra Motorsports won the Rolex Daytona GT race against our team in 2007; that's why I remember them very well. It's a well-organized, smart and great team, which shows they can win the biggest races out there.

"Two weeks ago Carlos contacted me while I was in Japan and asked me if I would like to join Sebring with his team in a DP. I didn't wait one second to tell him 'For sure!' It's a dream come true for me, to get the chance to race in one of them at the most difficult racetrack, Sebring.

"I know Daniel from hearing his name when he was doing single-seaters a few years back and then Porsche Cup cars the last few years. He is a quick guy and for sure deserves a great chance like this because of his talent.

"I know Cameron from last year when we won the Rolex 24-hour race together in Ben Keating's Viper for Bill Riley's team. Cameron is ultra quick and a smart person. So I am very glad to team up with them.

"I hope we can achieve something special here. The team showed they can do magic in the past, and I am sure they can repeat that.

"Thank you, Carlos, for giving us the chance to drive your car. We are all very thankful and will drive hard for you! It will be my first time in a DP, so I am very excited about this new challenge."

Action Express on top again in final practice at Sebring