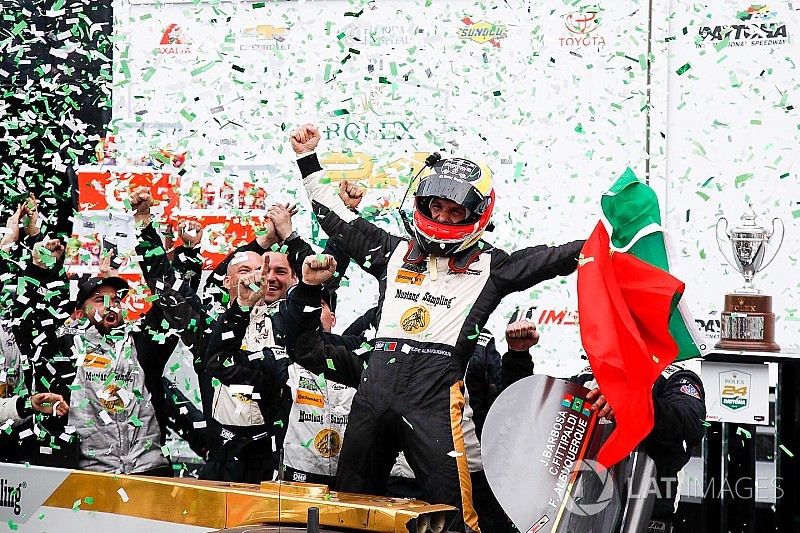 Rolex 24 at Daytona winner Filipe Albuquerque says taking a victory in the American endurance classic had become a “personal” matter after his controversial near miss in the 2017 race.

Albuquerque famously lost a win in the last seven minutes at Daytona last year after being bumped into a spin by the Wayne Taylor Racing Cadillac of Ricky Taylor going into Turn 1.

The Portuguese driver said the incident had weighed on his mind before he and his #5 Action Express Racing Cadillac teammates Christian Fittipaldi and Joao Barbosa avenged their defeat this time around.

"Exactly one year ago, I left this exact point very devastated, very sad with this situation,” said Albuquerque post-race. “Definitely what doesn’t kill us makes us stronger. We stuck together, we worked hard, we came here, qualified here, did a hell of a race, always on top, leading most of the laps.

“All these flashbacks were coming in my mind, my mind was playing tricks. [I was imagining] weird noises from the engine. I was really thinking the engine was dying but it didn’t! It became a personal thing, especially from last year.”

The #5 AXR car overcame overheating issues to clinch victory by 70 seconds from the sister #31 car, while the #54 CORE autosport Oreca also finished on the same lap.

Albuquerque also lost victory at Daytona in 2016 with a driveshaft issue, but believes he has now “broken the spell” the event held over him following his long-awaited triumph.

“When I saw Joao driving, I was super-nervous, because it wasn’t in my control whatsoever,” the United Autosports ELMS racer added.

“When I was inside of the car I knew exactly what I had to do, but I was always thinking about those last finishes. Somehow the engine kept going, kept going, the 31 and 54 getting on the same lap as me, the water temperature was getting higher.

“In the end I won. It was very emotional, for me it was breaking the spell.”