Three CTSCC practice sessions are scheduled on Wednesday and Thursday this week.

This week is going to be one of the most memorable weeks of Al Carter's racing career. After four seasons racing Continental Tire Sports Car Challenge at the highest level with his friend Hugh Plumb, Al decided to make an important career change for 2014. Before Christmas, he was selected by TRG-AMR North America team owner Kevin Buckler to drive one of the two TRG-Aston Martin Racing Vantage V12s GTD class in the entire season of the 2014 TUDOR United SportsCar Championship. This is an outstanding move for Al Carter who has made so much progress throughout the last racing seasons. Al has now landed the dream drive with one of the most decorated American endurance racing teams and an iconic Aston Martin brand and he is looking forward to start racing this weekend in his third consecutive Rolex 24 At Daytona.

"The Roar test was a great first step for the team as we begin to tackle the 2014 championship," said Carter. "I have competed with and for TRG in the past but never for a full season. Now that I am in the TRG-AMR camp for the full TUSCC GTD season, I feel great about what the team and I learned. The Rolex 24 will be like it always is, long and stressful. However, we have a game plan and will work as a team to stay focused" added Carter.

For this round 1 of the new TUDOR United SportsCar Championship, Carter will be joined by three co-drivers. James Davison will co-drive with Carter in all-twelve rounds of the TUSCC, David Block will also join Carter and Davison in all four rounds of the Tequila Patrón Endurance Cup and by Brandon Davis who will join the other three teammates behind the wheel of the No. 007 B+ Foundation / Eagle Tech / Jetset Magazine / Sideskinz TRG-AMR Aston Martin Vantage V12 for the 52nd running of the Rolex 24 At Daytona only. 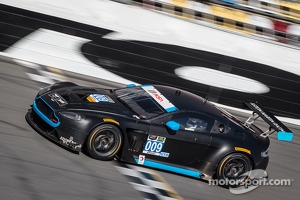 Not only did Al Carter make a big move to race in the TUDOR United SportsCar Championship but he also recently became a partner in Rebel Rock Racing, the team started four years ago by Grammy Award winner music producer Jim Jonsin. Rebel Rock Racing has an outstanding program in store for 2014. They are fielding three cars (2 GS and one ST) in the Continental Tire Sports Car Challenge and one of the 997s, the No. 7 B+ Foundation / Eagle Tech / SidesKinz / Stinkerz Porsche will be co-driven by Al Carter himself with co-driver Brett Sandberg. The two had a great test three weeks ago and they are excited about their first race together this Friday.

Started in 2011 the racing program involving The B+ (Be Positive) Foundation has been a total success. Al Carter and Hugh Plumb helped raise over $250,000 in three racing seasons and the program will continue this year with the goal to raise more money to fight childhood cancer. Even if they don't race together for the same racing team in 2014, the two B+ Ambassadors continue to support The B+ Foundation and will continue to visit children battling the disease at children's hospitals before each key race this season. The first event of the 2014 B+ Fighting Childhood Cancer Tour scheduled tomorrow afternoon, takes Al Carter, Hugh Plumb and The B+ Foundation to Arnold Palmer Hospital for Children in Orlando, Florida. The B+ Foundation provides financial assistance to families of children with cancer nationwide. In the last two years, The B+ Foundation awarded over $1,000,000 to families of children with cancer while giving nearly $1,000,000 to support research efforts. Information about the Foundation and its activities can be found at www.BePositive.org.

On Wednesday, Al Carter will also join a great group of IMSA drivers and will participate in the Camp Boggy Creek event.

Al Carter and Jim Jonsin would also like to invite the members of the media, IMSA competitors and the fans to a post race celebration, Friday, January 24 at 8:00 PM ET at Grind Gastropub & Kona Tiki Bar - 49 West Granada Blvd. in Ormond Beach. A portion of the proceeds of the cash bar will be donated to The B+ Foundation. Contact Mary Allison for additional details at mary@rebelrock.com.

Three CTSCC practice sessions are scheduled on Wednesday and Thursday this week. CTSCC starts on Wednesday (1:30 PM and 3:45 PM) and Thursday at 11:45 AM. Qualifying is set for Thursday at 2:30 PM ET and the race for Friday, Jan. 24 at 1:45 PM ET. The Daytona CTSCC will be broadcast the same day at 6:00 PM ET on Fox Sports 2.

ESM Patron geared up for Daytona