Albuquerque led from pole and was almost clipped by Dane Cameron’s Meyer Shank Acura DPi at Turn 1 but clung on to the lead. The race went under yellow almost immediately, however, as GTD racer Ian James spun his Heart of Racing Aston Martin exiting the first corner and collected Jacob Abel’s Acura NSX.

While most of the leaders pitted soon after the half-hour mark, Cameron stayed out and ran a long first stint – his team clearly prepared to roll the dice on fuel strategy. Vautier climbed to fourth, as Tincknell briefly got ahead of Magnussen in the first round of pitstops, but Magnussen repassed him on track and then got ahead of Vautier.

After an hour-long first run, and a brimmed fuel tank, Cameron handed over to Olivier Pla, who rejoined in sixth as the team aimed to make one fewer stop than the opposition. Vautier then suffered a bizarre spin as he entered the pits, dropping the Mustang Sampling car to the tail of DPi.

Pla pitted from the lead with 54 minutes remaining, allowing Taylor to take over at the front, who was well clear of Nasr (in for Derani) and van der Zande (who took over from Magnussen).

Taylor stopped for the final time with 43mins to go, rejoining 10s behind Pla.

All eyes were on the gap as Taylor chased down Pla, who dropped his pace substantially in the final 30 minutes – his task made harder by having to negotiate GTD traffic while doing so. Taylor rocketed past with 25mins remaining, sealing his victory.

Nasr and van der Zande battled for third, well clear of the Mazda of Oliver Jarvis (in for Tincknell) and Loic Duval (who took over from Vautier). Pla's bold fuel gamble bit him hard, as he lost second to Nasr and third to van der Zande in the final 10mins.

Van der Zande muscled his way past Nasr for second in the final moments, making contact several times as he forced his way ahead. That added to Wayne Taylor's joy, as the team's closest title rival lost valuable points.

In LMP2, pole winner Ben Keating slipped back to third at the start, but soon regained the class lead in his PR1 Mathiasen Motorsports ORECA. His biggest scare came later in the opening stint, however, came when he sideswiped Frankie Montecalvo’s GTD Lexus while putting a lap on him.

Keating handed over to Mikkel Jensen with a sizable lead over the Dwight Merriman/Ryan Dalziel Era Motorsport ORECA. Dalziel appeared to be taken out in a bizarre last-lap incident on the final lap at the Corkscrew – that almost involved the overall winner too, and fell to last in class after a second spin at the final corner too. 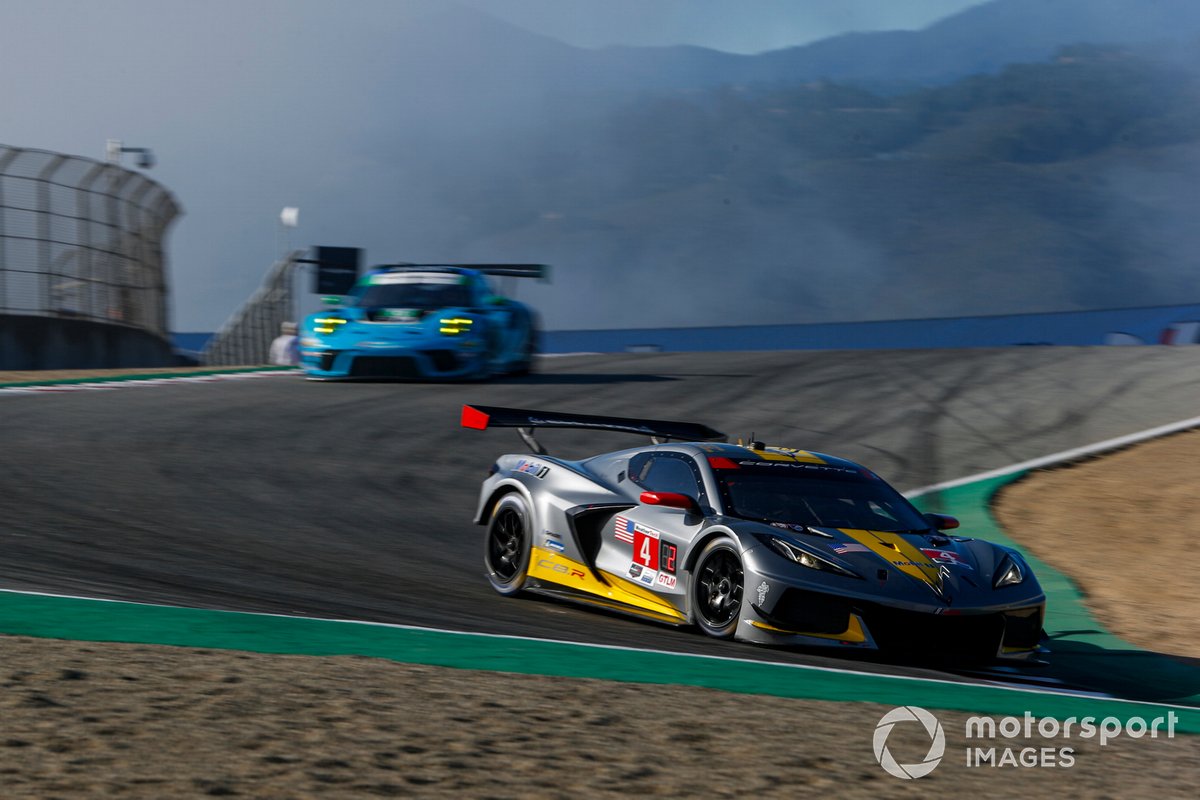 The all-Corvette battle for GTLM honours was closely matched throughout, with the pole-winning Jordan Taylor/Antonio Garcia leading for the most part ahead of the Tommy Milner/Nick Tandy C8.R.

The pair ran side by side just after half distance as they negotiated traffic, but their final stops proved crucial. Although Tandy locked up as he exited the pits – briefly running across the gravel at Turn 1 at pit-out – he managed to wrest the lead away from Garcia when it mattered.

The only other class contender, Cooper MacNeil/Matt Campbell WeatherTech Racing Porsche 911 RSR-19, was never in the hunt all day.

In GTD, Robby Foley’s Turner Motorsports BMW M6 got ahead of pole winner Trent Hindman (Wright Motorsports Porsche 911 GT3R) at the first corner. The opening stint of the race was wild, as Richard Heistand’s Audi got into the Lexus of Aaron Telitz, spinning him around, and Till Bechtolsheimer (Acura NSX) spun out Roman De Angelis in the second Aston.

After taking over from Foley, Auberlen extended the BMW’s lead out front, while an all-Porsche battle for second raged between Patrick Long (in for Hindman) and Laurens Vanthoor (sharing the Pfaff Motorsports Porsche with Zacharie Robichon).

Once Vanthoor cleared Long, he chased down Auberlen – who rejoined behind Long when he pitted for the final time. They made contact at the final corner before the BMW got back ahead.

While all this was going on, Vanthoor was now clear out front, running well ahead of the Paul Miller Racing Lamborghini Huracan of Madison Snow/Bryan Sellers. Long regained third from Auberlen in the closing stages.

Sebastien Bourdais gapped the field by more than 0.3sec to end second practice for IMSA’s finale, Petit Le Mans at Road Atlanta, in the final event for the Cadillac DPi-V.R.