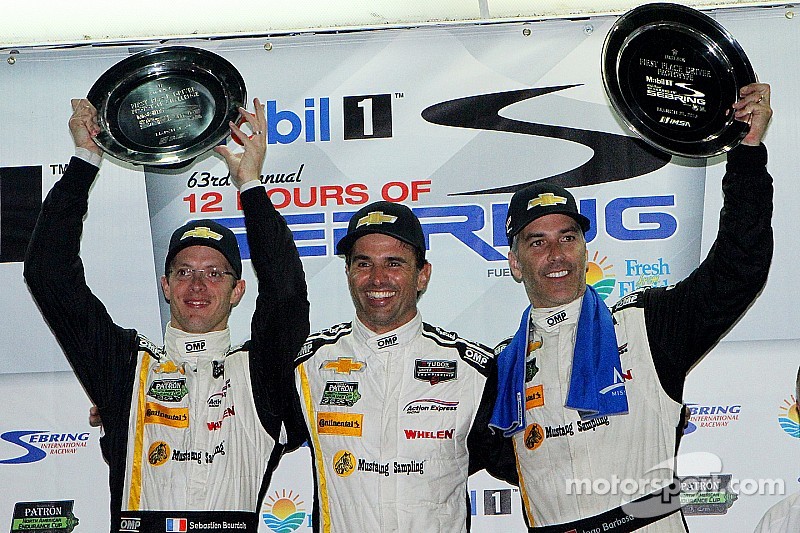 The checkered flag has finally flown in the 12 hour endurance racing classic. IMPECCABLE

Sebring, Fla. - The 63rd annual 12 Hours at Sebring has reached its conclusion. When the dust settled and the thundering crackle of race cars dispersed, one team was left to celebrate in the spoils of their triumph ... Action Express Racing.

Action Express checks out and makes history with Chevrolet

The No. 5 Corvette DP won the race by a full lap with drivers Joao Barbosa, Christian Fittipaldi, and Sebastien Bourdais each getting their fair share of time behind the wheel. The car completed 340 laps and made 14 pit stops.. This victory marks Chevrolet's first overall win in the race since 1965, a full 50 years ago when Americans Jim Hall and Hap Sharp won it in their Chaparral-Chevrolet.

The fastest lap of the event went to Krohn Racing's Olivier Pla, who ran a 1:52.261 on the car's seventh lap.

The best of the rest in prototypes

Wayne Taylor Racing ran a very quiet race and crept up into second by the time the final lap was run. The No. 90 VisitFlorida.com DP made it an all Corvette DP podium in third. Chip Ganassi Racing was unable to defend their 2014 win here, finishing fourth overall and the sister No. 31 Action Express Corvette DP rounded out the top five.

Mathiasen Motorsports ran a near impeccable race, following up their surprise Rolex 24 win with another victory in the PC class with Tom Kimber-Smith, Mike Guasch, and Andrew Palmer. The No. 54 CORE Autosport team (seventh overall) was second and the No. 38 Performance Tech Motorsports (ninth overall) filled out the rest of the PC podium.

Krohn Racing's pole did not transfer into a victory for the green machine, finishing eighth overall and sixth in class after damage taken in an early pit road collision. Rounding out the overall top ten was the GTLM class winner.

As documented in an earlier story which you can read HERE, it all fell apart in a dramatic way for Porsche in the final hour. The factory team was on its way to a 1-2 but after a left rear wheel issue on the No. 912 and gearbox problems on the No. 911 within 20 minutes of each other, neither even reached the podium.

Rising from the darkness in its iconic yellow livery, Corvette took command and stole the checkered flag with the No. 3 and drivers Jan Magnussen, Antonio Garcia, Ryan Briscoe. The No. 62 Risi Competizione Ferrari and No. 17 Falken Porsche took the other two spots on the podium.

GTD ended in an even more enthralling finish than GTLM. The No. 33 Viper, which is the same chassis that burned to the ground here in 2014, caught the bumper-less Alex Job Racing No. 23 Porsche in the final minutes of the race. The No. 23 locked up the brakes multiple times before flying off the course and almost into the tire barrier. The Viper ran away with it until it suddenly appeared in the pit lane, silent as the field raced by.

So in the end, Alex Job Racing kept the victory and earned redemption for the victory that was stolen from them in an officiating debacle last year. Mario Farnbacher, Alex Riberas, and Ian James were the drivers. The No. 007 TRG-Aston and No. 97 Turner Motorsport BMW joined the victor on the podium.

That's it for Motorsport.com's coverage of the 12 Hours at Sebring, be sure to check out the rest of our highlights and recaps from the event HERE.