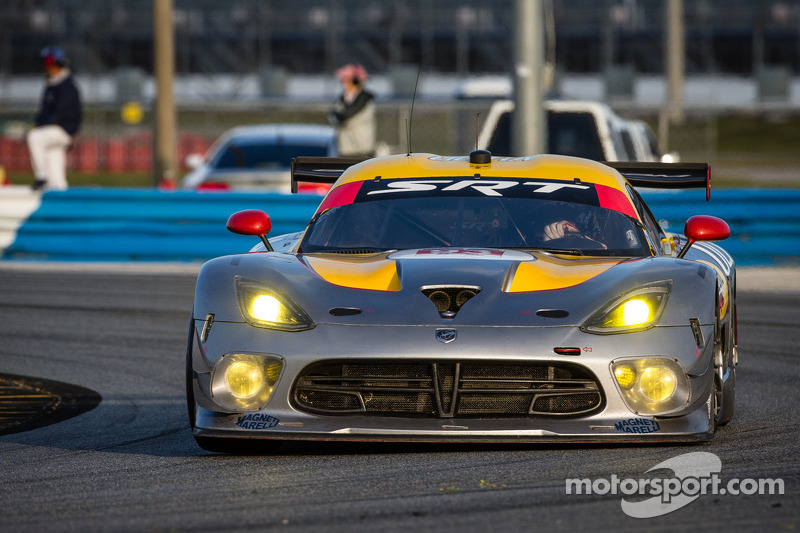 Both drivers were evaluated and released following visits to the infield care center, although the Spirit of Daytona Corvette DP sustained major damage and was taken to the team’s Daytona Beach shop following the incident. Charles Espenlaub was also unscathed after crashing the No. 46 Fall-Line Motorsports Audi R8 LMS in the chicane on the backstretch midway through the afternoon session.

Barbosa’s lap in the morning session unofficially bettered Jorg Bergmeister’s existing DP record (1:40.553) from 2011, while the fastest GTLM lap of the day topped Nick Tandy’s GT mark in January’s qualifying for the Rolex 24 this past season, 1:47.631.

“That’s no surprise (that we’re under the record),” said Christian Fittipaldi, who joins Barbosa and Sebastien Bourdais in the No. 5 Action Express Corvette DP. We knew it was going to be faster. At the end of the test I think it’s going to be between three to four seconds quicker than the track record.

“I wish it was only my car, but that’s not the case. Everyone is going to be a lot quicker. We have a good package, and we hope we can make it work better than the other teams.”

The test concludes on Wednesday with two sessions beginning at 9 a.m. and running through 5 p.m.

Symbolizing the essence of the merger that makes the TUDOR Championship, the DeltaWing DWC13 turned its first laps Tuesday at Daytona International Speedway. The revolutionary prototype completed 47 laps with IndyCar veteran Katherine Legge and Andy Meyrick at the wheel, unofficially finishing the day fifth in the afternoon session.

“We’re kind of where I expected us to be,” said team manager David Price. “We still have a bit of engine work to do, some dyno work, and we need to get more reliability in the car. We don’t have an issue with power, we just need to work on longevity.

“We’re trying to find the balance at this point. The new Continental Tires have been really good. We tested them immediately after Petit Le Mans and we were immediately quicker. We are quite pleased with the tires.”

Turning the first laps for DeltaWing was Legge whose lone race experience at the track came in the 2007 Rolex 24 At Daytona driving a DP for Robinson Racing. Despite the unpredictability of how the car would handle on the high banks of Daytona, it didn’t take long for Legge to get comfortable.

“It had been a while since I’d been on the track so it took me a few laps,” said Legge. “I had some experience here so they made me the guinea pig I guess. The DeltaWing was an unknown, but there were no issues on the banking, it was easy and flat. The car really looks unique when you see it going around the oval.”

As has become customary at any event the DeltaWing makes an appearance, the prototype was again a magnet for attention. But for a car that ran as a Garage 56 entry at the 24 Hours of Le Mans in 2012, its first appearance at Daytona on Tuesday was another milestone for the team.

“I think it’s a symbol of the merger,” said Price. “You’ve got the DPs, which were kind of the symbol of GRAND-AM, and the P2s obviously with the ALMS. It’s nice that we can contribute something to the unity of the series.”

The No. 93 SRT Viper GTS-R spent last weekend’s test sessions at Sebring at or near the top of the time charts. The team – led by drivers Marc Goossens and Kuno Wittmer – carried that momentum to Daytona, where the No. 93 machine once again led the way in GTLM on Tuesday as it prepares for its first factory-backed Rolex 24 effort since 2001.

“It’s definitely a pretty good car around here,” Wittmer said. “As far as top speed, I think we’re a little bit down, but as far as driving this car around the track, it’s literally a dream. It is a very, very comfortable car to drive. It is very strong under braking and compared to every other race car I’ve driven here in the past, this is probably the most comfortable car I’ve driven to date. That is very promising for us for the 24 hour, a race that we are strongly looking forward to finishing in the top.”

Wittmer is also strongly looking forward to participating in the 2014 TUDOR Championship. He did not mince words when expressing his enthusiasm for the new series.

Michael Shank Racing made history the last time it brought a Daytona Prototype powered by the new Ford EcoBoost twin-turbo to Daytona. Colin Braun circled the speedway at 222.971 mph back in October – the fastest lap ever recorded on the famed 2.5-mile oval.

Now, the team has installed the 3.5-liter, twin-turbo V6 EcoBoost engine in the No. 60 Riley driven by Ozz Negri and John Pew. The team also installed some of the updates for 2014 TUDOR Championship competition, but will wait until the Roar Before the Rolex 24 to test carbon fiber brakes.

“The mechanics have been working endless hours to get the car ready for the test,” Negri said. “The car is not 100-percent converted. But the new turbo changes everything. We’re still learning about the throttle lap and the way the power comes on – it’s better than we expected – and working on the new aero package.”

RSR among the quickest in PC debut at Daytona

Tuesday’s test marked the first appearance of the Prototype Challenge (PC) class at Daytona International Speedway, and RSR Racing was third fastest in the class.

“The car is running well, with no problems,” said Junqueira, pole winner for the 2002 Indianapolis 500 and an eight-time winner in CART/Champ Car competition. “I love the PC car – it has so much grip and great brakes. It feels great here at Daytona. It’s really fast around the corners, and the bus stop (chicane) is really fast.”

The No. 55 and No. 56 BMW Team RLL Z4 GTEs are technically not strangers to Daytona International Speedway, as the race cars were actually introduced at the “World Center of Racing” last February.

It was not until Tuesday, however, that the cars that raced the full American Le Mans Series presented by Tequila Patrón in 2013 turned their first laps in anger at Daytona. While the 2014 driver lineup has not yet been unveiled by BMW, drivers Joey Hand, John Edwards, Dirk Mueller and Bill Auberlen were on hand for testing at Daytona.

Auberlen noted that BMW is throwing substantial resources at the program to make the car as fast and as strong as possible for the season-opening Rolex 24 At Daytona. He also pointed out that there is still much work to be done.

“We’ve got two cars gathering data for four straight days; two days at Sebring (last weekend) and two days here,” Auberlen said. “Even our Sebring test was for Daytona. We ran a certain setup trying to improve on the setup for here. The cars are great. The cars drive really nice.

“This car is so good everywhere, but this is not its happy place. The car handles fantastic, but it just doesn’t have the straight-line speed.”

Some drivers may consider testing to be tedious, but for Performance Tech Motorsports driver Charlie Shears there’s no place he’d rather be. Shears turned his first laps around Daytona International Speedway Tuesday morning in the No. 39 Performance Tech Motorsports ORECA FLM09/Chevrolet that will compete in the PC class in the upcoming TUDOR Championship, the first laps of what he hopes will be an offseason with ample track time.

“The one thing we didn’t get a lot of last season was probably testing,” said Shears, who finished ninth in ALMS PC driver points in 2013. “It was my first year in the PC car so I could have probably used a little more time in the car. This year we’re going to try to double it up in testing.”

Performance Tech did not attend the opening IMSA test at Sebring International Raceway last weekend, but was the fastest of five entries at Daytona. That has Shears excited about the season-opening Rolex 24 At Daytona.

“It’s a fast track and it’s a lot of fun,” he said. “The thing about the PC car is it’s a fast car and from a budget aspect it’s great bang for the buck. The cars are also really strong. It’ll be very interesting to see how they run in these endurance races.”

Highway to Help will be racing in the Rolex 24 for the third straight year with the goal of raising funds for Alzheimer’s research. Lead drivers Byron DeFoor and Jim Pace drove in the morning session, and were later joined by Frank Beck and David Hinton.

Kevin Doran is on hand with his team to help crew the car. Following the test, Doran will update the chassis.

“We’re going to come back for the Rolex 24 with an updated car,” said Pace, overall winner of the 1996 Rolex 24. “Everyone’s got to get used to having a little more power and a little more group. Hey, this is Daytona – what’s not to like?”

AC/DC frontman Brian Johnson joined DeFoor and Pace at last weekend’s historic races at Daytona. His return for the Rolex 24 – where he raced in 2012 – is contingent on his television schedule in Britain.

What is causing the wrecks at Daytona?