Adds three new drivers for the Rolex 24 at Daytona.

Denver, N.C. – The 2010 Rolex 24 At Daytona-winning squad of Action Express Racing will look to return to victory lane at Daytona International Speedway in 2014. The team is prepared for a strong two-car entry in the inaugural IMSA TUDOR United SportsCar Championship event. 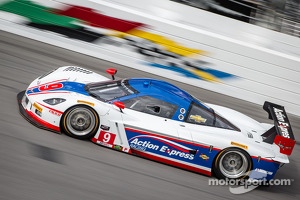 Action Express Racing’s No. 5 Corvette DP entry of Joao Barbosa, Christian Fittipaldi, and Sebastien Bourdais are all set to compete with their Coyote Corvettes for the TUDOR championship as previously announced.

“This is an exciting announcement for the Action Express No. 9 car,” said Action Express Team Owner Bob Johnson. “Teaming together with such a successful WEC race team like Delta-ADR for the first event of the Patron North American Endurance Championship really adds additional depth to our already outstanding endurance team.

We are also very proud and confident with both the 9 and 5 cars’ strong driver line-ups as we expect this to be an incredibly competitive event. The team has worked extremely hard in the offseason and is well-prepared and ready to support both our cars all the way to the finish.”

“We are looking forward to having Millennium Development on board as the primary sponsor of the 9 car,” said team manager Gary Nelson. “We are also happy about growing our relationship with Delta-ADR. We got to know Simon Dowson, (Delta Motorsport, Managing Director) and Nick Carpenter, (Delta Motorsport Technical Director) over the past year while working on a separate project together.

We began watching their World Endurance Championship races and they began watching ours. We all liked what we saw so we began discussing the possibility of joining forces for the Daytona 24 and possibly other endurance events. Delta offering to bring three of their top drivers completed the whole package.”

The driver line-up in the No. 9 Corvette DP, which will carry sponsorship from Millennium Development, sees a strong combination of experience between the five drivers.

Brothers Burt and Brian Frisselle, who both celebrated their 100th starts in Rolex Series competition last year as full-season drivers with Action Express Racing, will each make their 10th Rolex 24 start in the 2014 event.

“It is very exciting that both Burt and I are going into our 10th Rolex 24,” said Brian Frisselle. “I feel extremely blessed to have had the opportunity to compete in this race so many times and to be embarking on my 10th with one of the strongest teams at the 24! Action Express Racing has worked very hard with the off-season changes and I expect the team to be running up front as they always do at the 24.”

“Action Express Racing has shown that they are one of the best teams at this race and you go into it knowing that our cars will be in contention for victory,” echoed Burt Frisselle. “I think our partnership with Delta-ADR gives us a group that has a lot of endurance experience and that, combined with a team of Action Express Racing’s caliber will see us fighting for a win.”

The 2014 event will mark a debut effort in the Rolex 24 for Fabien Giroix who commented, “I speak for Stefan and John when I say, we have always wanted to compete in the Rolex 24 with a competitive team. Now it looks like we have everything in place for a strong performance.”

Giroix has an extensive racing resume dating back to 1984 when he first started in European formula car competition. In 1995, the Frenchman transitioned into high-level sports car racing, making five 24 Hours of Le Mans starts including a best finish of fifth in 1995.

Johansson moved to endurance sports car racing after several years competing in Formula 1 and IndyCar. The Swede is a 24 Hours of Le Mans winner and took a podium finish in his first-ever Rolex 24 At Daytona (1999).

Delta-ADR driver John Martin will also be making his first-ever Rolex 24 start. The Australian raced in Formula 3, A1 Grand Prix, and Superleague Formula competition before moving to sports cars in 2012 with Delta-ADR.

Action Express Racing will be on track at Daytona International Speedway this weekend for the Roar Before the 24 test days held in advance of the Rolex 24 which is set to take place January 25-26.