Denver, N.C. – In its very first race, Action Express Racing made history when it won the 2010 Rolex 24 At Daytona and the team looks to repeat the feat as a new era of sports car racing is set to begin this weekend with the opening round of the 2014 IMSA TUDOR United SportsCar Championship and the 52nd running of the twice around the clock endurance event.

With the race demanding the perfect combination of speed, experience, and preparation, the team has assembled a venerable group that has set out to accomplish the winning goal in what is expected to be one of the most competitive Rolex 24 events yet. 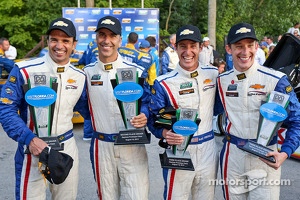 Both Burt and Brian Frisselle return to the team’s No. 9 Action Express Racing/Millennium Corvette Daytona Prototype and will team with Frenchman Fabien Giroix and Australian John Martin as part of a partnership with Delta-ADR of Great Britain for the Rolex 24.

Martin’s racing path has already crossed with that of IMSA’s leader Jim France, as the Australian ace raced in the 2013 24 Hours of Le Mans – driving as the opening driver when Jim France waved the French flag to start the endurance classic.

All seven drivers logged laps at the Roar Before the 24 test days two weeks ago at Daytona as Action Express Racing worked to adapt to a new set of regulations under the United SportsCar Championship banner. The team’s hard work over the offseason showed when the No. 5 Corvette DP delivered the quickest lap of the test. Fittipaldi set a fast lap of 1.38.630-seconds in the very first practice session which stood as the top time all weekend.

“We will approach the Rolex 24 just as we always have,” offered Team Manager Gary Nelson. “We have a 24-hour plan that we have used for many years. We have put together two solid cars and I’m really happy with the progress that we have made over the offseason. We always try to leave a little room around us and plan to remain in contention until the end.

The team continues to build on what was a very successful 2013 season which saw Action Express Racing grow as a competitive group with a run to fourth in the championship, victories at both Mid-Ohio and the 6 Hours of the Glen, and a double podium finish at Road America. Action Express Racing aims for even higher results in 2014.

Action Express Racing will make its fifth Rolex 24 start this year with the team having fielded a two-car entry the previous three years. In addition to the team’s historic debut victory, Action Express Racing took a podium finish in the 2011 event with Barbosa, Fittipaldi, Terry Borcheller, JC France and Max Papis. The No. 9 Corvette DP of Barbosa, Burt Frisselle, and Mike Rockenfeller finished fourth last year.

The team’s extensive knowledge of long endurance races combined with the deep talent pool of drivers, sees the 2010 Rolex 24 Champions among the most well-prepared teams in the paddock.

Fittipaldi (2004) and Barbosa (2003, 2010) are both Rolex 24 winners and the Frisselle brothers will each make their 10th Rolex 24 starts this year. Bourdais has a wealth of experience in 24-hour endurance race events as he has made several starts in the 24 Hours of Le Mans in addition to his four previous Rolex 24 events. The 2014 Rolex 24 At Daytona will mark both Giroix’s and Martin’s debut in the prestigious race but each have race experience in the 24 Hours of Le Mans.

“We feel great - I think we learned a lot in every session at the Roar which helped add to our positive preparation for the race,” said Team Owner Bob Johnson. “We wanted to learn a lot and get better and build on our endurance strategy and make sure all of the equipment is working as we want it to for the 24 hours. The speed is great, but that isn't the main objective. We want to be there at the end of the 24 hours."


Joao Barbosa, No. 5 Corvette DP: “The dynamic of the race has changed completely. The interaction of all of the different classes has changed because instead of two classes we are going to have four. And in some classes the cars have very similar paces but also some very different cars in the same class like the LMP2 and the DeltaWing racing together and racing differently on the same track. So it is going to be a very challenging race this year, probably one of the most challenging in a long time. There will be more cars on track and more chances to get in trouble so it is going to be a race to the end for sure. But the guy that has the best chance of winning is going to be the one that has the least problems during the race and that is avoiding contact and conflict with anyone so we are going to run our race and get to the last hour cleanly and then start from there again."

Sebastien Bourdais, No. 5 Corvette DP: “Action Express is a great group of guys. They have the experience you need to win long races. I am sure we will be contenders in this year’s 24. Even more than usual in this race, patience will be rewarded. I think that with so many cars on track, during the first 20 or so hours, the goal will be to stay out of trouble, and hopefully we can be fighting for the lead once it settles down and traffic gets lighter towards the end.”

Christian Fittipaldi, No. 5 Corvette DP: “I have been driving with these guys at this track for the last four years so I pretty much know everything that is happening and it just makes life much less difficult. It is never easy here, but it makes it less difficult. They know how I operate and I know how they operate as well. I think the race is going to be really good in that aspect. Realistically, I look at the season as separate from the Rolex 24. Basically the Rolex 24 is one thing and the rest of the season is something else. We are doing the possible and impossible to try and win this race."

Brian Frisselle, No. 9 Corvette DP: “I expect this year's Rolex 24 to be a very tough race just because of all of the crazy traffic and difficult cars to deal with. I think we have as good of a shot in all of our 10 years as we do this year. Having raced with Action Express for so long just helps with being comfortable with the car and the chassis. Although there have been some changes for the No. 9 car team-wise I think it just helps in my comfort zone, and gives me a kind of peace of mind coming in. But then again there are also a lot of changing parts so I'm sure all of that experience we have gained over the years will come in handy. I think back to my first Rolex 24 and I am coming in now so much more prepared, so I am excited.”

Burt Frisselle, No. 9 Corvette DP: "You go into this race really trying to pace yourself. You know the physical and mental task at hand. This being my 10th race. I am lucky because I know what it takes, but most importantly you are trying to win this race and in order to do that you have to survive the 24 hours. I think the easy mistake for the people that haven't been here is to get racing too hard too early and we know that isn't how you win. You win by being consistent and being on the lead lap and waiting until Sunday afternoon to settle everything."

Fabien Giroix, No. 9 Corvette DP: “I have always wanted to compete in the 24 hours of Daytona. This Millenium Development / Action Express / Delta-ADR partnership is an ideal way for me to make my first start. I have worked with Delta–ADR for some time now with some great results. They make me feel very comfortable. When I arrived in Daytona for the Roar before the 24 testing days earlier this month, I quickly felt the same level of comfort from everyone on the Action Express team. Driving on the high banks was certainly a new experience for me and I am glad I was able to get some quality laps in ahead of time. We are now looking forward to the green flag waving on Saturday with a goal of being the first to see the checkers on Sunday.”

John Martin, No. 9 Corvette DP: "I think if we play our cards right the chances of us winning the race could be very good. You certainly don't come here to come in second. We come here wanting to win and I certainly believe this team is capable of doing that. I am really looking forward to it. This race is one I have wanted to do for a number of years. I have done Le Mans twice and since I have been involved in the endurance side of things I've known about the Rolex 24 for a long time and I am so excited to be here and take part in the race."