The long-time Gainsco/Stallings Racing driver jumps to Action Express Racing after the No.99 entry was withdrawn for the season.

Denver, N.C. (4 March 2014) – After getting off to a fast start to the 2014 IMSA TUDOR United SportsCar Championship, Action Express Racing will look to keep that momentum going at Sebring International Raceway. The team is pleased to announce that Jon Fogarty has been signed to co-drive the No. 9 Action Express Racing Corvette DP with Burt and Brian Frisselle in the Mobil 1 Twelve Hours of Sebring Fueled by Fresh From Florida.

Fogarty holds the record for pole positions in Daytona Prototype qualifying (25) and has amassed 16 IMSA victories. He also won the 2007 and 2009 Driver Championships. He became available after his GAINSCO Racing squad elected to focus on the 2015 season following an accident during the Rolex 24 At Daytona involving his co-driver Memo Gidley. 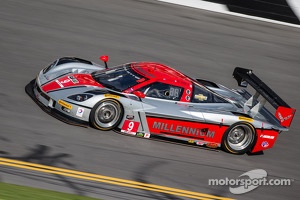 “I’m super excited about this opportunity with Action Express Racing,” said Fogarty. “It’s an unfortunate situation we found ourselves in after Daytona, but the opportunity to go and participate at Sebring with Action Express Racing in such a big and historic event is great. I was bummed about the possibility of missing the event but then this opportunity came along with a great team. Action Express has proven its ability to win longer events and shorter events and their track record in the endurance races is quite good so it’s a great opportunity. I’m very happy that it came about. The Frisselles have been in the series for a long time and I’ve competed against them for years. They are strong competitors on the track and have even stronger character off the track. Being able to team up with them is great - I know we’ll have a great team relationship. Their result of third at Daytona was strong and they are in a great position heading into Sebring so it is great to join that duo.”

Fogarty, who has won at every level he’s driven, has a strong record of success in the 12 Hours of Sebring with five top-five finishes in five starts – including one start in the prototype ranks (2012) in which he finished second.

“We are very happy that Jon will be joining Burt and Brian in the No. 9 car for Sebring,” said Action Express Racing Team Manager Gary Nelson. “We were very sorry to hear our friend, Bob Stallings, will not bring his GAINSCO Racing team to Sebring. Getting a driver with the Daytona Prototype credentials that Jon has is a great thing for Action Express, we just wish it happened under different circumstances. We believe our strong performance in the Rolex 24 At Daytona was a direct result of how hard the Action Express drivers and crew worked in the off-season. I see the same level of intensity now as we work to keep our Daytona momentum going into Sebring. Having Jon on board adds even more strength to our program.”

Burt Frisselle, who took the 2012 Sebring PC class win with EJ Viso and Alex Popow, along with his brother Brian Frisselle will look to uphold their family’s strong record at the track, with their father having won the 12 Hour event overall in 1980.

The duo finished third in the Rolex 24 At Daytona with co-drivers Fabien Giroix and John Martin and they now look forward to targeting a run to victory lane with Fogarty in the 2014 Sebring event.

“I am very excited and pleased that Jon will be teaming with us at the 12 Hours of Sebring,” said Burt Frisselle. “Jon has competed against us for years and has won several races and captured a few championships, so anytime you can add someone of that experience and talent, it is a great thing. Action Express showed at Daytona and again at the Sebring test that the cars are extremely competitive. I have no doubt that we will arrive in Sebring with a chance to win and again have both cars on the podium. Jon is an addition that just makes us even stronger.”

“I think Jon is the best selection Action Express could have made to fill out the driver lineup for the No. 9 car,” echoed Brian Frisselle. “Jon's combination of experience and talent will make the No. 9 car that much harder to beat. Jon is joining a great team in Action Express Racing that currently has some great momentum going into Sebring. I can't wait for the race!”

Chaves joins Legge and Meyrick for the endurance classic at Sebring

Al Carter to run 007 at Sebring