Action Express Corvette wins the battle at the Brickyard 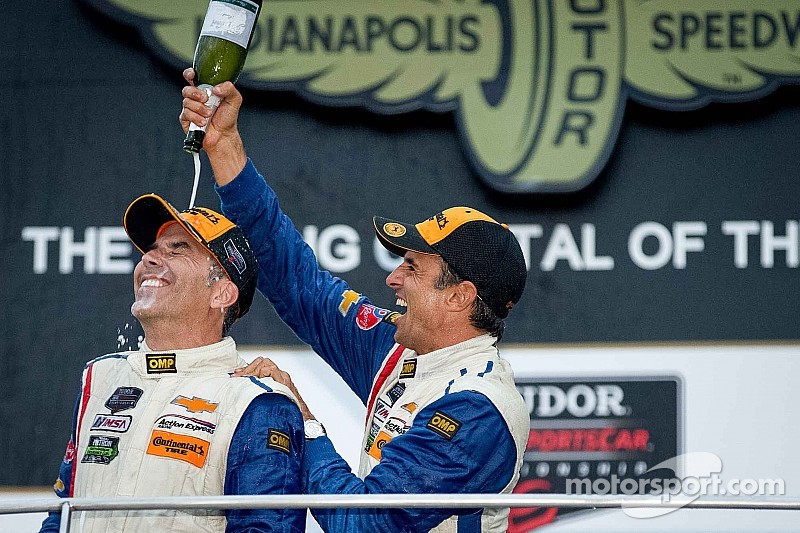 Since their victory at the Rolex 24 at Daytona, Action Express has run well but never quite as well as they did in the season opener. Tonight, at the Indianapolis Motor Speedway’s Brickyard Grand Prix, the Chevrolet Corvette Daytona Prototype driven by Joao Barbosa and Christian Fittipaldi returned to victory lane.

“I’m really happy,” Fittipaldi said, “and we are back in the championship hunt. We have three more races to go to get it done.”

Fuel was an issue, and there was a question as to whether the Action Express car would have to pit. “I was very conservative,” Barbosa said. “I kept asking the team how we were on fuel. We knew it was going to be tight but I saved as much fuel as I could.” Clearly, it was enough. It was a Chevrolet sweep for the day, with the Stevenson Camaro Z/28.R taking the Continental Challenge race earlier in the afternoon.

Second in the TUDOR Challenge was the Ganassi number 01 Ford EcoBoost Riley DP driven by Scott Pruett and Sage Karam, with Karam filling in for an injured Memo Rojas. Third was the Spirit of Daytona Corvette. Fourth was the Corvette DP of Wayne Taylor Racing, and fifth was the Extreme Speed Honda P2 car that Ryan Dalziel had qualified on the pole.

In GT Le Mans, the SRT Dodge Viper of Jonathan Bomarito and Kuno Wittmer won, beating the Ferrari F458 Italia of Pierre Kaffer and Giancarlo Fisichella. The number 912 factory Porsche 911 RSR was third, followed by the two factory Chevrolet Corvettes, which have been dominating the class most of this year.

“It was an amazing day. The whole SRT crew did a great job,” Bomarito said.

In GT Daytona, the Ferrari 458 Italia of Alessandro Balsan and Jeff Westphal beat out Christopher Haase and Bryce Miller in an Audi R8. Third was Jeroen Bleekemolen and Ben Keating in Keating’s privateer Riley-prepared Dodge Viper.

Hawksworth wins as a fill-in

Forty-eight cars started the race, and 43 finished. The race went 108 laps for the winner.

Next up for the TUDOR Challenge is Road America on August 10.