“A curse has been lifted” for Michael Shank Racing 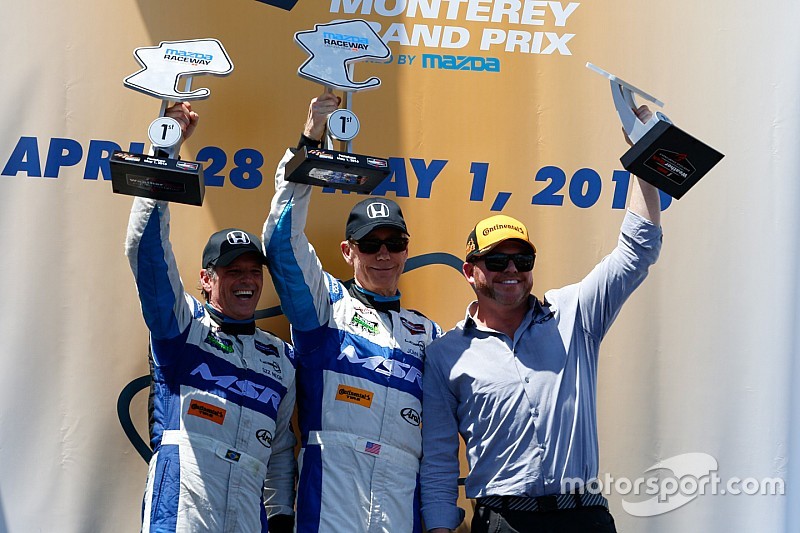 “It was a lot about saving tires. It was Ozz’s ‘fault’ that we won.”

The MSR team has been notoriously unlucky, since switching from its Ford-powered Daytona Prototype to the Ligier JS P2 Honda at the start of last season, and was dominating this year’s Rolex 24 at Daytona until a mechanical failure. That handed victory to Extreme Speed Motorsports’ similar car.

It meant MSR drivers had not topped the podium at an IMSA race since victory in the 2012 Rolex 24, shared by Negri, Pew, the late Justin Wilson and AJ Allmendinger.

Said Pew of the four-year wait for victory: It feels like a curse has been lifted.

“We’ve been on the podium a few times, but not on the top step for a while.”

Although the Mazda Prototypes were faster than the Ligiers at Laguna Seca, one suffered an oil pump failure, while the other spun and damaged its tires in pursuit of Negri, who easily had the Daytona Prototypes covered, and pulled away to win by 30sec.

He commented: “Once in front, I pushed really hard to open up a gap, then just managed my lap times, managed the gap [behind] and passed the GT cars where it was possible to do so without going off-line and damaging the tires.

“Once I had a strong lead, we could cruise to the finish.”

The victory means Ligier-Hondas have won three of the first four races in this year’s IMSA WeatherTech United SportsCar Championship, with ESM’s car victorious at Daytona and the Sebring 12 Hours.