8Star ready and raring to conquer Rolex 24 Hours of Daytona

8Star Motorsports is focused and ready for the challenge that lies ahead in the legendary enduro.

Daytona Beach, Fla. – After possibly the most troubled build-up of any team to the 2014 Rolex 24 Hours of Daytona, 8Star Motorsports is focused and ready for the challenge that lies ahead in the legendary enduro.

At 14.10 local time, the 8Star LMPC ORECA will take its place at the back of the 67-car field for a race that will inevitably test the skill and commitment of the team’s four drivers to the maximum. 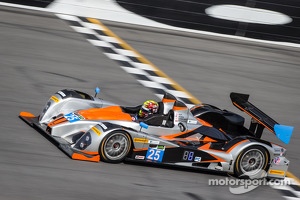 The qualifying woes of Thursday where the car missed the session due to a mechanical failure were compounded when, after just two laps in Friday morning’s one-hour free practice session, a collision involving 8Star owner/driver Enzo Potolicchio again sidelined the car for the session and provided the team’s mechanics with significant repair work to ready the car for the race.

The coming together with a slower GTD car in practice may form the pattern for the race ahead, as constant traffic will necessitate almost continuous overtaking, with the possibility of contact an ever present danger due to the varied speeds and braking performances between the different classes and the size of the field.

8Star’s strong four-driver line-up, consisting of Platinum graded Rob Huff – the 2012 FIA World Touring Car Champion – as well as Le Mans 24 Hours winners Tom Kimber-Smith and Enzo Potolicchio and accomplished Gentleman driver Mike Marsal, will give the Florida-based outfit the best possible chance of charging through the field and challenging for honours as the chequered flag drops on the marathon race.

Kimber-Smith, who will complete the opening stint of the race, said: “We haven’t had the best of luck leading up to the race, but hopefully our problems are behind us. Starting from the back and with cold and foggy conditions forecast, it’s going to be a long, hard race; probably the hardest 24-hour race there is. However, we have the line-up to deliver come the end of the race.”

Huff is taking part in his first Daytona 24 Hours and said: “I’m really excited to be taking part in my first Rolex 24 at Daytona. It’s a legendary race and I’m very much looking to being part of it. I will be getting into the car for the first time as night falls if it all goes to plan, so it’s certainly going to be an exciting debut!”

Marsal, competing in his sixth Rolex 24 Hours of Daytona, comes off the back of a strong fourth place in yesterday’s Continental Challenge Series race. He said: “This is a crazy race and the challenge of the track with all the debris and tyre marbles that build up over a 24-hour period means it’s all about staying out of trouble and bringing the car home.”

Team Owner, Enzo Potolicchio, said: “After the team’s troubles in the lead up to the race we are now more ready than ever. The guys have prepared the car perfectly and we have a very strong and experienced line-up with a host of endurance race wins between us. I’m confident we have the right team to do the job!”