With a second and a victory at COTA doubleheader, Madison Snow was able to take the 2013 IMSA GT3 Cup Challenge title.

AUSTIN, Texas, Sept. 26 — Young Madison Snow drove a Wright Motorsports-prepared Porsche to a second-place finish last Friday and an outright victory on Saturday at the Circuit of the Americas (COTA), earning enough points to clinch the 2013 championship in the top class of the IMSA GT3 Cup Challenge by Yokohama with two races still remaining. 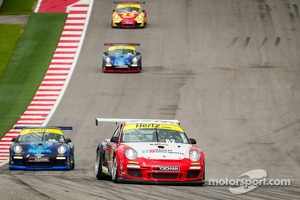 Saturday's victory was Snow's sixth out of the 14 races held so far this year. The two podium finishes at COTA with his UIS-sponsored Porsche gives him 226 points to Sloan Urry's 182. Only 40 points will be up for grabs at the last doubleheader of the year Oct. 16-19 at Road Atlanta, so the title belongs to Snow.

Snow, from Lehi, Utah, earned two BBS Pole awards and set two track records at COTA too despite being the youngest driver in the series at 17.

Snow's fastest time in practice, a 2:15.015, goes down as the qualifying record here since it was the series' first visit to this track and the starting line-ups were determined by times set in both practice and qualifying after heavy rain spoiled qualifying on Thursday. Snow earned another track record when he set the fastest lap of Saturday's race with a 2:13.883.

Another Wright Motorsports driver, Kasey Kuhlman of Cincinnati, finished sixth in the Masters class on Friday and third in that division on Saturday with his Kuhlsport Porsche to join his young teammate on the podium at the state-of-the-art, 3.427-mile, 20-turn road course. Kuhlman is now tied for the Masters point lead with Craig Duerson. Kuhlman was 13th overall on Friday and eighth overall on Saturday.

Rain played a major role in Friday's race, as just a handful of the 15 laps were run under green-flag conditions due to rain, and the event ended under yellow with Snow finishing second to Angel Andres Benitez Jr.

Sunday's race was held under dry conditions. Benitez started second and he got by Snow in Turn 1 on the first lap, but then spun on his own in Turn 2. He only completed four laps and ended up out of the points.

Michael Mills got by Snow in Turn 1 on the first lap too but Snow got him back almost immediately and Snow led all 21 laps of the race. Urry ended up second, 23.463 seconds behind Snow at the checkered flag. Mills held on for third.

Kuhlman took the green flag in 14th place on Saturday but he had an amazing run on the first lap, rising to eighth position. He got seventh overall and third in Masters when he passed Patrick Otto-Madsen working lap three. The latter passed Kuhlman back with seven laps down to push him to fourth in the Masters class. Otto-Madsen eventually got second in the class to Duerson, but Kuhlman rebounded to nab the final Masters podium position after Mark McKenzie encountered problems on the white-flag lap.

Another driver under the Wright Motorsports canopy, John Baker of New York City, finished 20th overall on Friday and 16th overall on Saturday. He had an eventful first lap on Saturday too, as he started 18th but he was 11th when lap one went in the books. He had a spirited battle with Billy Stevens, Peter Collins, Eduardo Cisneros and others during that race.

Madison Snow: "Friday's race was in the rain. I was getting used to the track and the changing conditions as Benitez was pulling away. Once it started raining really hard I was pulling him in, as the car was set up perfect for those conditions, but then the race went yellow and finished under yellow and there was nothing I could do.

"Saturday's race was a crazy start. I had a large battle with Mills, who kept going off the track when he was trying to pass me. He ended up hitting me really hard in the back one corner, but I ended up getting away and pulled away the rest the race."

Kasey Kuhlman: "Race 1 was a frustrating exercise with the terrible weather, so a dry run for race 2 was very exciting. It was a fun race. I got a great start and moved up five positions by the end of lap one. I pushed hard early on and cooked my tires. I had to back off for a while to bring them back. So many laps were just aimed at keeping pace and not making mistakes. The car was really good and really came to me at the end. Huge thanks to John Wright and his team for a great day."