It's all in the Family.

Persistence and hard work are common ingredients in legacies, and they're both helping Wayne Ducote build his family's name in the Porsche GT3 Cup Challenge USA by Yokohama.

Ducote is one-fourth of a family in progress of building a legacy at the track while racing with Kelly-Moss Motorsports, along with a brother and two sons.

Wayne Ducote is a 68-year-old Masters competitor from New Orleans, where he is in business together with his brother David, another Porsche GT3 Cup Challenge USA competitor. Wayne's professional life sometimes can take him away from the track and his family, so he cherishes his track time. 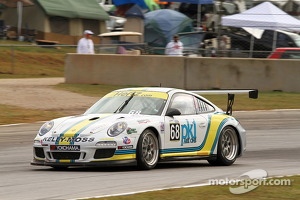 "I do probably six or seven events a year, so not every race," Wayne Ducote said. "It's really good when you can spend quality time with one or both of your sons. And David, of course, is faster than I am, and we still race in Aspen and sometimes (youngest son) Chapman will come with us so the three of us are there together."

Even though he misses the occasional race, Ducote has well-rounded racecraft. Having started in a spec class at the club level, Ducote moved up the ladder to the Cooper Tires Prototype Lites Powered by Mazda Series in an L1 car where he competed for three seasons before joining the Porsche series.

"In a Lites car with the downforce that it has, it does amazing things," Ducote said. "The (Porsche) Cup car is a lot easier to drive and more gentle on your body, but it takes a little more finesse to get it to do what you want it to do. Every time I go to a track and every lap I get a little better because I know what it'll do, and I know what it won't do.

"I made a little bitty mistake in the wet at Road America this year. I came around Turn 2 by myself in the wet, and I spun and lost eight places. Just little things you learn how to do. When to get on the throttle, when to get off the throttle."

Though Kelly-Moss driver Ducote admits he is not picky when it comes to the setup of the car, he still takes what happens while in the car seriously. Ducote and his teammates will decipher data alongside driver coach Andrew Davis to continue to mold their talent.

Despite that attention to detail, Ducote finds himself entirely relaxed when racing. For him racing is a moment - a 45-minute moment, to be exact - to himself when he can let go of every other care in the world.

"In a race car I am totally relaxed," Ducote said. "There is no adrenaline rush, there are no nerves. When you go into a turn, the only thing on your mind is, 'Am I braking at the right point and is this guy behind me going to try to dive?' I don't care what else is going on in the world or in my life, and so as a result your mind is totally clear when you do that, and it's fun.

"If you do something correct, you say to yourself, 'Well done,' and if you mess up you say, 'Well, that was stupid.' There are no distractions other than what is on the track."

With the 2014 season encroaching, Ducote is excited to get back to what he loves doing. He is thrilled the first event of the season once again will take place March 13-14 at Sebring International Raceway, a track he and all drivers respect.

"Sebring, it's kind of like my home track," Ducote said. "I've raced there more than anywhere. I really like Road America. Road Atlanta and Circuit of the Americas were fun. But Sebring, I'm used to Sebring. It's a real man's track. It's tough, and it will beat you up."

David Ducote: Working for the Weekend