10 races on the menu for the GT3 Cup Canada Challenge

The series will run alongside the NASCAR Canadian Tire Series for two events and the NASCAR Camping World Truck Series for one. In the third event of the season, the series runs with the IndyCar Series at the historic Honda Indy Toronto Street Circuit.

"IMSA is quite proud of what we have already accomplished with our Ultra 94 Porsche GT3 Cup Challenge Canada by Michelin series partners, and we look forward to an exciting season of racing in 2014," said Steven Sewell of the IMSA Development & Single-Make Series. "We've managed to fine-tune our signature Canadian motorsports events and further diversify our venue portfolio with the addition of high-profile events such as the Indy Toronto at Exhibition Place and Canadian Tire Motorsport Park as part of the NASCAR Camping World Truck Series weekend. Altogether, it's a fitting championship calendar backdrop for the introduction of the all-new 2014 Porsche GT3 Cup race car."

The season kicks off at its usual opening destination - Canadian Tire Motorsport Park (CTMP). The newly remodeled facility was recently nominated for the "Motorsport Facility of the Year" Professional Motorsport World Expo Award. CTMP is the only North American track nominated for the award and will host Rounds 1 and 2 of the 2014 season on May 17-18. 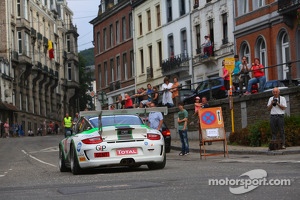 "We are excited to welcome back the Ultra 94 Porsche GT3 Cup Challenge Canada by Michelin Series to Canadian Tire Motorsport Park in 2014," said Myles Brandt, president and general manager of Canadian Tire Motorsport Park. "The series is a great proving ground for Canada's next crop of racing talent and is known for exciting, close-quarters racing. Adding the series to our Victoria Day SpeedFest Weekend lineup as well as Labor Day Weekend with the NASCAR Camping World Truck Series will provide our fans with a varied mix of on-track action."

Participants travel to Calabogie Motorsports Park in Calabogie, Ontario, on June 21-22 as the two featured races of the Calabogie Grand Prix. The winding circuit is a favorite for many drivers. Calabogie hosted the 2013 season finale and inspired Porsche Motorsports North America to stage a paddock-wide barbecue last September. It is the longest track in Canada at 3.14 miles and consists of 20 turns and a 2,000-foot straightaway. The circuit is owned and operated by former Porsche GT3 Cup Challenge Canada Gold Cup champion Bruce Gregory, who is looking forward to the Porsche GT3 Cup Challenge Canada's visit again in 2014.

"In 2011, Calabogie Motorsports Park hosted the very first Porsche GT3 Cup Challenge Canada race weekend, and it has been a signature event for us ever since," Gregory said. "With the introduction of the new GT3 Cup car for the 2014 season, we're anticipating new lap records and very close racing. It will be the best show yet, and we can't wait to welcome back the spectators, IMSA, Porsche, Michelin and, of course, all the competitors."

On July 19-20, GT3 Cup Challenge Canada teams take on the Honda Indy Toronto temporary street circuit for the first time in series history. With 10 of Porsche's newest 911 GT3 Cup Platinum cars leading the charge on the on the bumpy and challenging surface at Exhibition Place, the multi-class competition promises to be better than ever.

"We are always looking for ways to provide our Honda Indy Toronto fans with more entertainment both on the track and off," said Honda Indy Toronto President Charlie Johnstone. "The Ultra 94 Porsche GT3 Cup Challenge Canada by Michelin series will be an exciting new addition to our weekend lineup. We think our fans will really enjoy seeing the teams and drivers competing in the iconic Porsche 911s, and getting to see the cars up close will only add to the excitement."

On the weekend of Aug. 9-10, participants return to Quebec's iconic Grand Prix de Trois-Rivières for the second consecutive year. The series enjoyed a successful debut on the tight, quirky Trois-Rivières circuit in 2013 with nonstop green flag action for both races and all practice sessions.

"Everyone from our volunteer workers to our officials and, of course, our spectators were thrilled to have the Porsche GT3 Cup in the streets of Trois-Rivières in 2013," said Grand Prix de Trois-Rivières General Manager Dominic Fugère. "This is why it will be an honor and a privilege to welcome the series again with, as a special bonus, a new generation of Porsche 911 race cars that seems to have been tailored specifically to fuel the dreams of our more than 130,000 fans."

The series rounds out its 10-race schedule with a return trip to Canadian Tire Motorsport Park alongside the NASCAR Camping World Truck Series on Aug. 30-31.