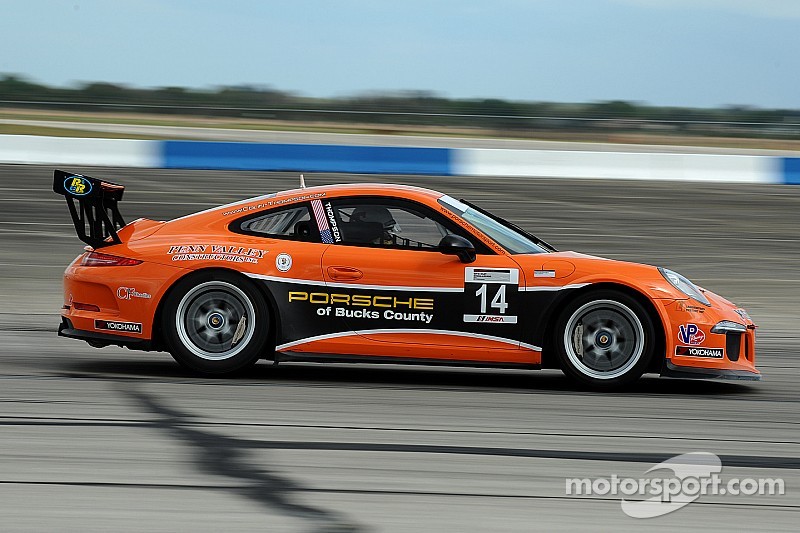 Also wins the race on a wet, treacherous track.

Colin Thompson kept his cool and his Porsche 911 GT3 Cup car on track in treacherous, rainy conditions to win the season-ending Round 16 and the Porsche GT3 Cup Challenge USA by Yokohama championship on Oct. 3 at Road Atlanta.

Thompson, from Doylestown, Pennsylvania (in photo), beat Angel Benitez Jr. to the finish by .685 of a second after starting from the pole in the No. 14 Kelly-Moss/Porsche of Bucks County entry. Christina Nielsen finished third in the 45-minute race in the No. 25 NGT Motorsport Porsche.

Series veteran Thompson earned his first championship by eight points, 254-246, over Benitez. Series rookie Michael Lewis, the championship leader entering this final round, spun out of the race at the start and ended up finishing 21st and third in the championship with 241 points.

"Porsche of Bucks County set me up with a car, and they're the reason I'm here," Thompson said. "And Kelly-Moss Motorsports, we pulled it together. What a race!"

The pressure hovering over the start of the race was nearly as thick as the cloud cover. Lewis led Thompson by one point and Benitez by seven points after Benitez won Round 15 Thursday.

But the drama reached its pinnacle for the season even before the field crossed the start-finish line to start the 45-minute race.

Thompson tiptoed through puddles in Turn 12 to head down the front straightaway and take the green to start the race from the pole. But Lewis and the No. 20 JDX Racing Porsche of Sloan Urry, who started second and third, respectively, spun in the slick conditions exiting Turn 12.

Lewis and Urry both bounced on the muddy grass next to the track and made separate contact with the wall. Their respective races were over, just yards past the start-finish line on Lap 1.

Benitez, from Valencia, Venezuela, avoided the spinning cars Friday and cars making evasive maneuvers in the grass and found himself in second place in Turn 2 in his No. 05 Formula Motorsport/Avid Motorsport Porsche, with Jesse Lazare third in the No. 31 Door Doctor/Moorespeed entry.

Thompson kept the lead in the ensuing restart and pulled away to a 7.313-second lead over Benitez. But that gap evaporated when Masters competitor Dan Weyland spun in Turn 10, triggering a full-course caution with about 18 minutes remaining in the race.

The rain started to subside when the race restarted with 13 minutes remaining, and Thompson pulled away again. Thompson led Benitez by 2.708 seconds with six minutes left.

But Thompson made a small mistake with three minutes remaining, letting Benitez pull to within .395 of a second with less than two minutes left. Benitez pulled to within a car length of Thompson over the last two laps but couldn't find a way past.

Thompson could have surrendered the lead and still won the championship, but he sealed the deal in powerful style with a victory.

The situation on the opening-lap incident was the opposite for Thompson of Round 15 in dry conditions Thursday. Thompson started from the pole but lost the lead to Lewis in Turn 2 on the first lap, eventually finishing third and losing the points lead to Lewis.

"It took us long enough in the season to get on pole, and it paid off," Thompson said. "In Race 1, I had no idea what to do from pole. I hadn't started from pole since Skip Barber and quarter-midget days. It was different and I had to adapt. I left a gap open, and Lewis got by yesterday, and it made me a little bit worried going into today. But I knew as long as I was in front of him it didn't matter.

"But Angel was right there. It was in the rain, and it got pretty tight at the end there when Angel really closed up. But we pulled it together. It was killer."

David Calvert-Jones swept both Platinum Masters races this week, driving his No. 12 Competition Motorsports/Curb-Agajanian Porsche to a 32.335-second victory over David Williams today in Round 16.

But the victory didn't come without drama for Calvert-Jones, from Los Angeles. He was involved in the opening-lap melee triggered by the spins of Lewis and Urry, spinning and collecting the No. 15 Wright Motorsports Porsche of 2014 Platinum Masters champion Kasey Kuhlman.

Kuhlman's race ended against the wall, but Calvert-Jones was able to resume with a damaged rear bumper and drive to victory.

"The start was just crazy," Calvert-Jones said. "I got a little of the mess in front of us with Michael and Sloan. I was checked up, which then spun me, and I spun into Kasey, which is really unfortunate.

"I feel so bad for Kasey. P1 in Masters is great for me, but I want to have a good and clean race with him, and it was out of my control. It's unfortunate. He had a great season."

Williams, from Annapolis, Maryland, earned his fourth Platinum Masters podium finish of the season in the No. 37 TPC Racing Porsche.

"I haven't been on a podium ever, so this is a great day," Weyland said. "To have my team up here cheering for me - it feels great."

Levitas started third in the No. 35 TPC Racing Porsche but passed Mosing and David Ducote for the lead around the halfway point of the 45-minute race. He held off Ducote by 3.119 seconds for his Gold Cup-leading fifth victory of the season.

"What a weekend," Levitas said. "It had so much drama."

The victory also was Levitas' sixth in Gold Masters, which also led the class. But it wasn't enough to clinch the championship, as Mosing hung on to win, 236-235, over Levitas with his third-place finish that came despite an off-track excursion late in the race that ripped the front splitter from his Porsche.

"The car came in really good," Mosing said. "I was just being conservative what I was running, and my driver coach kept pumping me up and said I could go a little bit faster. I ended up getting a little too hot into Turn 10. I took the splitter off the front, and then at that point I didn't have any pressure in the back, so I was just going to finish out clean."