Team Chevy is looking to take the podium home with a large contingent of cars heading to Long Beach.

Armed with a victory at its longest race of the season, Chevrolet’s Corvette Daytona Prototype teams head to America’s premier street circuit event for the shortest race on the calendar. The streets of Long Beach will play host to the annual Grand Prix of Long Beach – a southern California tradition celebrating its 40th year. The TUDOR United SportsCar Championship is part of the festivities with Corvette Daytona Prototypes playing a leading role.

Saturday’s Tequila Patrón Sports Car Showcase – set for 3:10 p.m. PT and airing live on FOX Sports 1 – is a 100-minute race made up of the TUDOR Championship’s Prototypes and the GT Le Mans class. With heavy involvement in both those classes plus being an engine supplier for the Verizon IndyCar Series, Chevrolet will be the prominent marque on the Long Beach weekend.

The opening two rounds of the TUDOR United SportsCar Championship featured two distinct types of race tracks. That trend continues with the series’ third event on its inaugural calendar. But Long Beach is unfamiliar territory for the Daytona Prototypes. The last time DPs raced around the 11-turn, 1.968-mile street circuit was 2006 as part of the GRAND-Am Rolex Sports Car Series; the American Le Mans Series’ prototypes ran there from 2007-13. Entries from both series now populate the TUDOR Championship’s Prototype class. 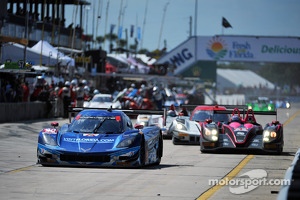 There won’t be much time for teams to acclimate themselves to the circuit with a two-hour, early-morning practice followed by a 30-minute session late in the afternoon before qualifying. That plus the race’s abbreviated length means there is no margin for error. Since they debuted for the 2012 Rolex Series season, Corvette DPs won two of the three street races on the GRAND-AM schedule: both on Belle Isle in Detroit.

Long Beach continues a run of unique circuits that Team Chevy faces in the opening rounds of the TUDOR Championship. The season began on Daytona International Speedway’s infield road course before moving to the rough-and-tumble permanent road course at Sebring International Raceway. Action Express Racing’s No. 5 entry of Joao Barbosa, Christian Fittipaldi and Sebastien Bourdais led a Chevrolet sweep of the top four positions at the Rolex 24. They followed with a third-place finish at Sebring to lead the Corvette DP contingent.

Wayne Taylor Racing, runner-up at Daytona, is entered for Long Beach along with Spirit of Daytona and Marsh Racing to make up the group of Corvette DPs set for Round 3.

“There are many unique challenges to racing around Long Beach,” said Jim Lutz, Chevrolet’s Program Manager for Corvette Daytona Prototypes. “As DPs have not raced there in some time, there are many unknowns – things like suspension and aero setup, and gearing ratios will be best estimates based on our simulations at Chevrolet. The length of the race and minimum drive times bring a new element of strategy into play as well. More than ever, the teams that are best prepared ahead of Friday’s first practice will have distinct advantages. We’re confident our Corvette DP teams will be chief among those.”

Conway takes points lead into next Lamborghini Super Trofeo round