It was another positive outing for the California–based Porsche GT3 Cup team as Blair Chang also brought home a top-five finish in the Gold category.

Competition Motorsports delivered another strong performance in Race 2 of IMSA GT3 Cup Challenge USA by Yokohama competition on Friday at Sebring International Raceway as Fred Poordad led the team with a Masters Podium result after finishing fourth in the Gold class.

It was another positive outing for the California–based Porsche GT3 Cup team as Blair Chang also brought home a top-five finish in the Gold category. Making an impressive debut in Porsche GT3 competition, Michael Lewis once again the Platinum charge with a sixth place result in the No. 98 Competition Motorsports/Curb-Agajanian Porsche. 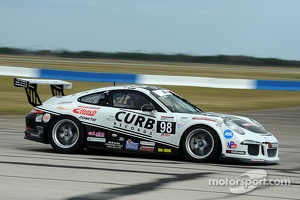 “It was a very good showing for Competition Motorsports this weekend, the whole team did a great job. I got a bit of a slow start in the race and it took me about a third of the race to kind of get into a rhythm,” said Poordad of the run. “But once I got into a rhythm then I started to progress up the field and avoided any trouble that was going on around me. At the end of the day the car felt good, it felt really strong toward the end and I think if we could have had another 15-20 minutes it would have served us well. But we will use this as a foundation to build on for the rest of the season.”

Poordad and Chang ran in line together through most of the race with each turning nearly identical lap times in their Porsche machines.

“It was a lot better than yesterday!” said an enthused Chang of his run in the No. 09 The Agency Porsche. “Slowly but surely I’m getting back into the groove. I’ve only raced one time in three years but I think given a couple of more races I’m going to be right there. All of these guys have been in this series for the last two and three years straight and I’m just getting back into it. So I feel good about my chances now – I really do. I feel like I can compete with all of these guys in my class. The car was really, really good. Competition Motorsports gave me a really great car. It was good at the end, it never really seemed to go away and it was good on the tires so I was really excited.”

Lewis, who started deep in the field, made quick work of moving up the order to take sixth at the finish of the 45-minute race.

“I came from 14th to sixth and that was my goal to be top-six so it was really good,” said Lewis. “Like yesterday, I had to come through the field. I just have to thank Curb Records and Competition Motorsports for giving me help and for keeping me calm. I sometimes tend to get excited and drive too hard but they were just keeping me cooled down and said ‘hey, just take every chance you can get.’ It’s just good practice.”

It was a disappointing result for David Calvert-Jones in the No. 12 Wheels Up Porsche as he was hit from behind early on in the race and fell way down the order. He was able to remain on the track but with so much time lost, and a significant loss of power due to the damage to the car, the day ended with an 18th place finish despite running laps nearly two seconds faster than cars further up in the field.

“I don’t know who he was, but he tried to out brake me I guess going into Turn 7 and that normally doesn’t work too well when you’re right behind someone,” said Calvert-Jones of the contact. “Luckily there wasn’t too much damage to the car and for the rest of the race I was just trying to get the times down and use it as a practice session. It was only my second time in the car so I was just using the time to learn more and get more practice in. It wasn’t all that we wanted this weekend, but the Competition Motorsports guys did a great job and it was a solid start to the year. I am already looking forward to Laguna.”

Competition Motorsports is eager to return to race action in May as the Porsche GT3 Cup Series next heads to the team’s home track of Mazda Raceway Laguna Seca.