The IMSA GT3 Cup Challenge by Yokohama Series had a clean race in Round 12 of the 2013 season at the Grand Prix of Baltimore.

BALTIMORE - Aside from an incident in Turn 1 of the first lap, the IMSA GT3 Cup Challenge by Yokohama Series had a clean race in Round 12 of the 2013 season at the Grand Prix of Baltimore presented by SRT. The turn entering Pratt St. wasn't wide enough to fit a group of three-wide Porsche 911 GT3 Cup cars as the field began the 45-minute sprint. 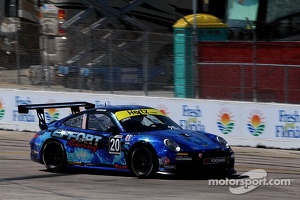 Several cars were involved in the initial incident that kept the course under yellow for seven minutes. Three drivers were forced to retire from competition as a result of the contact.

Pole sitter Sloan Urry maneuvered through traffic at the start to seize his first win of the year. With the victory, the EFFORT Racing driver moves into second position in the individual Platinum Cup points standings, ahead of NGT Motorsport's Angel Benitez Jr. Benitez dropped back to finish 13th after making contact with Brett Sandberg of TruSpeed Autosport when the two were side-by-side on Lap 25.

"Turn 1 was the biggest pressure I got from Angel (Benitez Jr.)," Urry said. "He got me on the start and I knew I just needed to hold my inside line and from then on I never even looked back just pushed 100 percent every single lap. I kept pushing and pushing just in case because you never know what's going to happen.

It's an awesome win for me, it's my first and it feels good. It's also my first time here and first time on a street course. I guess it suits my style because it's the fastest I've been this whole season and I'd love to come back next year."

Despite starting in 10th position, Snow found his way to the podium after an impressive run to the front of the pack. By Lap 7 of the 27-lap race, Snow had pushed his way to second position.

"Today I was back starting 10th because I crashed in qualifying, but I worked my way up," Snow said. "I was just trying to get points and came out with the lead in the championship and had a good gap behind me and that's what I planned for, so that's great."

Behind Urry and Snow was Sandberg. An incident in the final lap of yesterday's race kept Sandberg off the podium, so today the Allendale, N.J.-native was determined to spray champagne. He attributes his third place finish to a fantastic start, in which he climbed three spots on the first lap.

"We had a great start," Sandberg said. "Today was good. The car was fast. We made a few changes overnight. It was good most of the way through. We had some contact entering [Turn] 1, which actually knocked my toe and steering out of whack, so it was a handful to drive the second half of the race, but we managed to hang on."

'Hanging on' and managing the temperatures today were key to success. Mistakes made in Race One weren't repeated in Race Two. Sandberg didn't wear a cool suit yesterday when temperatures in the car neared 125 degrees.

"I had never worn a cool suit before and did not have one yesterday," Sandberg said. "That was a huge mistake so I don't really remember the last few laps of yesterday. So I got one today and that was night and day difference."

A handful of drivers admit to having a foggy memory of the final laps of Round 11, but with slightly cooler temperatures today and experience from Race One, competitors managed the added challenge much better. All drivers held onto the lead lap through the first 17 trips around the street circuit.

As tight as cars were in the first turn, they were that spread out in the final 10 minutes of the race. Most every driver remaining had built a steady gap between his next competitor and kept the Porsche 911 under control to take the finish line.

Gold Cup leader Michael Levitas was involved in the Turn 1 incident early on, which left the top step of the podium open for his TPC Racing teammate David Williams. Williams earned his first Gold Cup win of the season in front of a hometown crowd filled with friends, family and coworkers. The longtime Annapolis, Md.-native was overjoyed with the win, but to perform in front of his loved ones made him even more excited.

"To get first place in my first year in my hometown is great," Williams said. "It's fantastic. To do it in front of a big audience with lots of hometown people here makes it even better."

Although Levitas did not have the performance he hoped for, the TPC Racing owner grinned from ear to ear as he talked about his teammate and good friend Williams.

"Any time I'm out here in the Porsche of Towson 36 car is a great day," Levitas said. "To see my teammate David Williams of Merkle in the 37 car pull off a win I'm just as excited."