Sean Rayhall doubles-down on double podiums at CTMP in Canada


Sean Rayhall doubles-down on double podiums at CTMP in Canada This last weekend saw the IMSA development series Rounds 7 &amp; 8 in the 14 Round 2013 Cooper Tires Prototype Lites Powered by Mazda season play out. As the round numbers suggest, the season passed by the halfway point with the races run at the Canadian Tire Motorsports Park (formally Mosport), around 60 miles drive East of Toronto and the Toronto Pearson International Airport.

As mentioned in the pre-weekend "Sean Rayhall poised to move at The Mobil1 SportsCar Grand Prix" article, season points leader (by only one point) Sean Rayhall was poised to repeat the feat that launched him into the points lead with a double win weekend like he had at Mazda Raceway Laguna Seca. This is exactly what transpired, and more, much more. 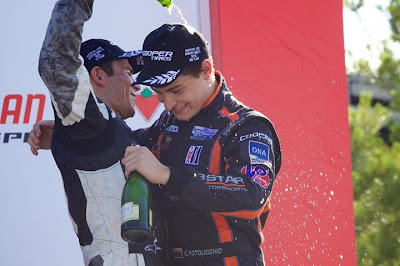 Round 7, also referred to as Race 1 of the The Mobil1 SportsCar Grand Prix two race weekend, had Rayhall start the race at the pole position, but very early into the race, he was passed by the driver who was sitting third in the season points, Performance Tech #18 Ryan Booth.

"Booth got by me on the start, through a tight run side by side through one, where I had to settle in and save my tires for the right time," said Rayhall in a post The Mobil1 SportsCar Grand Prix weekend interview.

There Sean Rayhall sat with the gap times remaining fairly consistent between .246 sec. to .471 over the course of around 9 laps. On Lap 10 Rayhall saw his opportunity and took it.

"I made the pass after catching a draft down the back straight into turn 8, where I held the line when Booth made contact with my right rear causing him to spin, while I had a huge correction before driving away," recounted the Robert Talbott Inc. #14 Comprent driver.

Booth re-entered the track in P9 after the spin. Rayhall then put on a clinic of consistency while drivers behind him kept loosing time. Eventually, Rayhall had pulled out a lead of as much as 20.020 seconds on #6 Daniel Goldburg, Booth's Performance Tech team-mate, by Lap 14. By Lap 17, Booth had moved his #18 Performance Tech car up to P7.

Lap 17 saw a YELLOW Flag at around 24 minutes into a 30 minute session. Goldburg was able to make up some of the time he had lost to being behind by 16.750 sec.. This, of course, reset the field for a battle to the end when the GREEN Flag would again fly.


Enter Round 8, also referred to as Race 2 of the The Mobil1 SportsCar Grand Prix two race weekend. Sean Rayhall, once again, started on the pole position and Ryan Booth, once again, passed Rayhall for the lead in the race. This was beginning to look like a conspiracy of circumstance with a two race weekend having both races begin the same way with the pole position starting driver loosing the lead on the first lap. Q - Was the pass kind of like in Round 7 where there might have been a touch and Booth looses control and has to pit?

"No just a great run out of turn 5b after Booth got loose, and a solid draft to finish it."

Later in the race, Booth, while about 2 laps behind due to some extended pitstop work for mechanical issues, set the fastest lap of the race on Lap 11 at 1:14.931 which would have set a new mark for this Canadian dedicated road course. On Lap 29, however, Sean Rayhall reset the mark at 1:14.920 putting a final cap on a dominate performance. Rayhall was able to keep the race at bay once he re-assumed the lead and finished the race on Lap 31 9.206 sec. ahead of Performance Tech's #6 Daniel Goldburg and 9.634 sec. on P3 8Star Motorsports' Christian Potolicchio.

Q - Great race ... and the team that you are working with, 8Star, made the podium. Christian Potolicchio remained very close to Daniel Goldburg once Brownson was out of the way ... I thought he might have had a chance at getting by the #6 but a P3 is very good - is this his best result?

"Christian did a fine job, I am absolutely stoked to be a part of 8Star Motorsports, and also very excited that Christian had his best finish in Prototype Lites yet! He was very close to Goldburg and we will continue to make him and the 8Star Motorsports team as a whole, better each race!"

Q - What were the keys to being able to sweep the Mobil1 Sportscar Grand Prix at Canadian Tire Motorsports Park and take a giant step toward securing the points championship?

"The key was behind setup and maintaining a smooth line for the first half of each race. Being smooth and conserving the tires of our really fast Robert Talbott Motorsports Mazda so we could make huge gains mid-way through each race!"

"I am now Christian's driver coach and am working with 8Star Motorsports to develop him for the remainder of the season as of right now. Perhaps you will see us co-driving together at some point?

"But [what] an amazing feeling to come away with two wins and to have Christian on the podium with me, knowing how hard we worked to get him there tasted nearly as sweet as victory!" 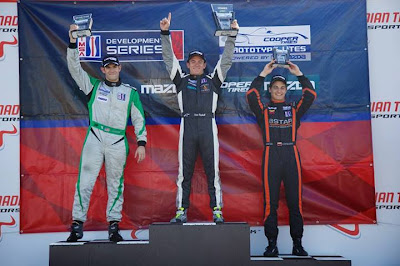 The Mobil1 SportsCar Grand Prix held at Canadian Tire Motorsports Park Round 8 of the 2013 Cooper Tires Prototype Lites Powered by Mazda season podium. From R to L - P2 Performance Tech's Daniel Goldburg, P1 Comprent Motorsports' Sean Rayhall, and P3 8Star Motorsports' Christian Potolicchio.
While there were many double podiums for The Mobil1 SportsCar Grand Prix's 2013 Cooper Tires Prototype Lites Powered by Mazda held at Canadian Tire Motorsports Park - Daniel Goldburg's Round 7 &amp; 8 P2s, Performance Tech's Round 7 P2 and P3 posting of Ryan Booth and Daniel Goldburg respectively, none were as dramatic and decisive as Sean Rayhall's two double podiums for first - Round 7 &amp; 8 P1s but also due to his coaching relationship with 8Star Motorsports, second - the Round 8 P1 and P3 performance of Sean Rahall himself, and the driver he is coaching, Christian Potolicchio. Next stop is another two race weekend featuring Rounds 9 &amp; 10 at the 2013 Road Race Showcase, Road America Elkhart Lake, WI - August 9th through 11th, 2013.

Maybe an opportunity for a quadruple double podium ... dya' think?

Benitez takes over points lead with race 2 victory at CTMP