Rebel Rock Racing is entered in this weekend's Lime Rock Park event with four cars, two in the GS class and two in the ST class.

Rebel Rock Racing traveled to the last round, raced at Mazda Raceway Laguna Seca with positive intentions. This was the first time that the team, led by Grammy award winner and team owner driver, Jim Jonsin, assembled such an armada of Porsche race cars to compete at that level. All of the four driver combinations were looking for their best result of the season but unfortunately for them and the team in general, Laguna Seca resulted in a much different ending than they all anticipated. The four cars entered scored a DNF (did not finish) in California leaving some mixed emotions and a spirit of redemption for their drivers before Lime Rock.

Rebel Rock Racing is entered in this weekend's Lime Rock Park event with four cars, two in the GS class (7 & 08) and two in the ST class (87 & 88). Lime Rock is already the fourth round of the 2014 Continental Tire SportsCar Challenge where GS and ST will have their own race to continue the tradition on this short legendary 1.5 mile road course loaded with history. The challenging track opened in 1957 and 57 years later it is still one of the driver's favorite to win. 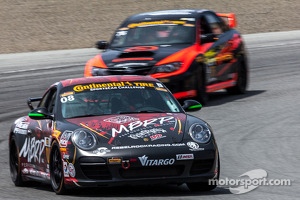 The Continental Tire SportsCar Challenge is the main event at Lime Rock so all the Rebel Rock drivers will be able to fully focus on their objective. Rebel Rock Racing was the highest ranked Porsche before Laguna Seca and even if the Porsche is not the fastest car to compete with this season in the GS class, Lime Rock has always been a good track for the 997 in the past, so Al Carter, Brett Sandberg, Kyle Marcelli and Martin Barkey have high hopes that history will repeat itself again.

Like at Laguna Seca, the No. 7 Rebel Rock Racing/B+ Foundation/Caramba Tequila/Eagle Technology Systems/Sideskinz/Stinkerz Porsche will be co-driven by Al Carter and Brett Sandberg and the No. 08 Rebel Rock Racing/MBRP Inc. Performance Exhaust/ Kin/ The Sports Lab/ Vitargo/ The Garage/ Jackson Transportation Systems/ All Ontario Recycling Porsche by Canadians Kyle Marcelli and Martin Barkey.

On Thursday before the race weekend starts, Al Carter will resume his role of Ambassador for The B+ Foundation and for the fourth year in a row, will visit children battling cancer at the Connecticut Children's Medical Center in Harford. His visit is part of the '2014 B+ Foundation Fighting Childhood Cancer Tour'. The Andrew McDonough B+ (Be Positive) Foundation honors the memory of Andrew McDonough. The overall goal of The B+ Foundation is to "Do Good". Before each key race of the TUDOR United SportsCar Championship and the Continental Tire SportsCar Challenge, Al Carter visits kids at children's hospitals to make a positive difference and keep the "B+" message alive.

Jim Jonsin No. 88 Porsche Cayman (ST class): "Our last few races have been tough to say the least, we are looking to put it all behind us at Lime Rock, the cars are strong as ever thanks to the amazing RRR crew, thank you Louis Malone, Mike Morgan and GIAC Tuning for the special attention on the cars the last two weeks, Garret thank you for the hospitality and looking after our guys, look for the No. 88 Jim Jonsin, Corey Lewis, Ingersoll Rand, Joe Gibbs Driven, Monticello MP, Pit Bbull, Porsche Cayman ST, were are hunting for a podium and taking no prisoners!!!"

Corey Lewis No. 88 Porsche Cayman (ST class): "Coming into Lime Rock weekend, looking forward to gaining momentum for the rest of the season. Jim and I have some unfinished business, our No. 88 Monticello Motor Club / Rebel Rock Racing Porsche Cayman should be in contention for a very strong result."

Al Carter No. 7 Porsche 997 (GS class): "You learn about character and toughness when you're faced with situations. The "Racing Gods" were pretty tough on the entire Rebel Rock team at our last race, but I am proud how everyone dug in and battled back to have this team prepared to perform at Lime Rock. Brett Sandberg and I both consider Lime Rock our home track, watch for our No. 7."

Brett Sandberg No. 7 Porsche 997 (GS class): "After an extremely disappointing weekend at Laguna Seca for the entire Rebel Rock Team, we are all looking for a strong comeback here at Lime Rock Park. LRP happens to be a home track for me and I am really looking forward to this one!"

Kyle Marcelli No. 08 Porsche 997 (GS class): "We have had some tough luck during the recent rounds. However, we have been working hard since Laguna Seca, and we have made some development with the Porsche and I'm confident we will perform strong at Lime Rock."

Martin Barkey No. 08 Porsche 997 (GS class): "Laying down the laps and racing on the simulator...... looking forward to seeing what this track is like in person should make for a fun race as it seems really fast for such a short circuit."

Ari Straus No. 87 (ST class): "I'm delighted to race with Monticello Motor Club member Anthony Geraci in the Rebel Rock 87 for his pro racing debut and alongside its sister car 88, piloted by MMC's own pro-instructor, Corey Lewis, and team owner, Jim Jonsin. I've raced in the Continental Tire Series for partial seasons since 2009, and there's no better place for incredible pro-am action. We are honored to represent Monticello Motor Club and Rebel Rock, and we look forward to testing the cars at MMC's private 4.1 mile racetrack 90 minutes from Manhattan prior to the race."

Anthony Geraci No. 87 (ST class): "I am grateful to Rebel Rock Racing and my sponsor European Granite and Marble Group for allowing me the opportunity to participate in my Pro debut with the IMSA Continental Tire SportsCar Challenge at Lime Rock Park. I will be racing with fellow Monticello Motor Club Member Ari Straus in the No. 87 Rebel Rock Porsche. After several years of racing PCA and in the super competitive SCCA Spec Miata Nationals, I feel up to the challenge to race alongside some of the best drivers in the sport."

Ex-Marine loses leg in combat, but it doesn't slow him down on the track

Parente does the double for McLaren in Lime Rock GTs