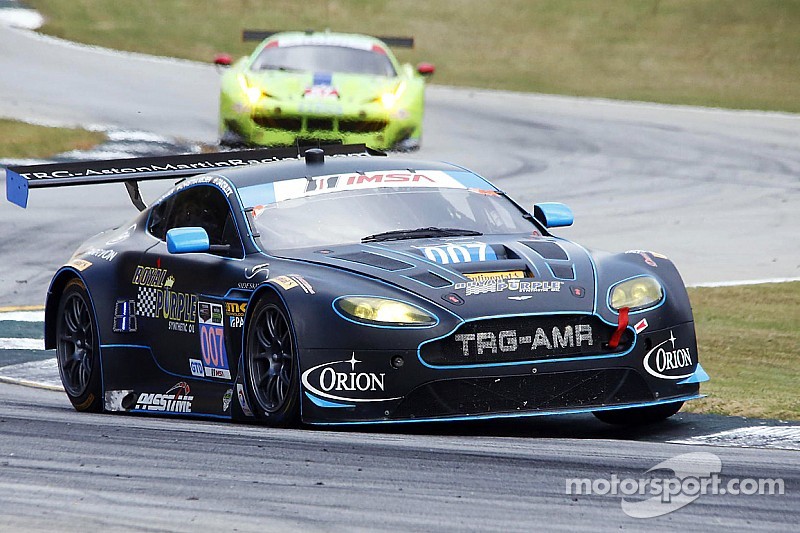 Things did not end will for the TRG-AMR team at Road Atlanta.

ASHLAND, OREGON (October 13th, 2014) – Project Motorsports, a sports car centered motorsports team based out of Ashland, Oregon, is wrapping up the year with disappointment at Road Atlanta following a horrific accident by driver James Davison of the TRG-AMR GS class No. 09 Aston Martin Vantage GT4 in the Continental Tire SportsCar Challenge. Davison, on the downhill run to Turn 10,suffered an incident causing the vehicle to roll or flip end-over-end and land upside down in the gravel trap. While the driver was uninjured, the No. 09 car, which was due to be run by Derek DeBoer for the Continental Tire SportsCar Challenge race, was withdrawn from the event.

The following interview with Derek after the heart-breaking weekend outlines the highs, lows and emotions faced by many drivers in professional motorsports.

Q: What were your thoughts and emotions leading into Road Atlanta and the Petit Le Mans weekend?

"I was thrilled going into the Road Atlanta event- any chance to participate in an iconic event such as this and an opportunity to learn a new track are what I live for."

Q: Was this your first professional experience at Road Atlanta?

"I had never even visited the state of Georgia, so yes, this was my first experience at Road Atlanta. "

Q: First of all, how were your times and that of your co-driver to start?

"The whole event was really shaping up to be a successful one. On our first day of testing we both ran times that would have put us on pole at last years race. James and I, as well.

Q: When you first heard/saw the accident James had in the car, what were your first thought?

"It was one of those drivers worst nightmare moments- the first thoughts certainly were with James… I instantly went into the - God, I hope he is ok…. Then once you knew that he was the other emotions came in… There is so much effort and commitment from so many that go into an event like this- so I was next concerned about letting them all down and also not having the opportunity to end our season with the momentum that a win would bring us. We really were poised to go win this thing- its a devastating feeling to be put on the sidelines. All in all though- James was ok, and we all get to live to race another day. "

Q: After you knew he was healthy, what then were your thoughts and emotions especially after
hearing the roll cage was bent and you wouldn't be racing?

"It was such a severe incident that the hope of racing that weekend instantly went out the door. This team is amazing and they often pull off miracles, but this time it was clear that the car was done. It was a real blow to feel that opportunity lost. Thats the hardest part with racing- the lows can be so low! "

Q: You remained at Road Atlanta after the accident, while that must have been difficult, were there
any lessons you took away from being a close spectator to the events?

"I did remain for the entirety of the event. It was important to me to stay and support the team and also to be there for my sponsors and supporters that were coming either way. It’s very hard to be on the sidelines, but I’ve learned in racing, as in many other parts of life, that sometimes it just doesn’t go as planned. You adjust and move forward the best that you can. My role changed for the weekend and it’s now time to focus on 2015. "

Q: Any closing thoughts on the end of this year and for 2015?

"This year was a growing one for me and I am very thankful for the support I have received. I feel that I’m in the right spot doing the right thing and there’s a lot of comfort in that. As long as I learned and took something away from each experience, which I’m confident I did, I know that it will serve me well going into next season. "

IMSA: 'A letter to our fans'