DAYTONA BEACH, Fla. - Colin Thompson is continuing to climb the ladder in his quest to become a Porsche factory driver.

Halfway through his second season in the Porsche GT3 Cup Challenge USA by Yokohama, Thompson is tied for first in the championship with Angel Benitez Jr. heading into the next two rounds June 27-28 at historic Watkins Glen International.

But that doesn't come as a surprise to Thompson, a Pennsylvania native. In fact, it's almost as if it's going according to plan.

"We want to be top every race," Thompson said. "But at the end of the day, I'm looking at a championship, and that's the goal. Last year I had to get to know the car, and now that I have a better idea of how they like to be driven, I can really focus on absolutely driving the wheels off it every race and going for that championship."

This year he has changed teams, from his family-owned Thompson Racing to series powerhouse Kelly Moss Motorsports. But the constant for Thompson is the iconic Porsche 911 GT3 Cup car.

"Porsche is one of the few series left in the world that is involved in racing at the core factory level," Thompson said. "They don't have a racing development portion of their factory. Porsche is racing.

"The fact of how involved they are in IMSA GT3 Cup, as a factory, made it an easy decision. The series is a perfect fit. It's a good area to learn the race car, to learn how Porsches like to be driven and hopefully turn that into a pro car."

The Porsche GT3 Cup Challenge USA by Yokohama has allowed Thompson, 20, to develop as he learns the nuances of the 911 GT3 Cup car and matures as a driver. He came to the series in 2013 after open-wheel competition in quarter-midgets, Skip Barber and USF2000 and a year in a Volkswagen Jetta TDI.

"Last year was a big learning curve for me just trying to figure out what I wanted out of the series and what I wanted out of the car," Thompson said. "I laugh now watching videos of myself road racing when I was 15. I was winning those races, and all I see is mistake, mistake, mistake. Now I have to be super-critical, and it's not mistake-free, but you are also putting yourself at the highest level of performance." 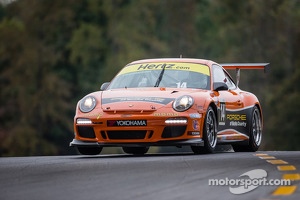 It has been a year of changes for Thompson, but he has taken it all in stride. The strengths of Kelly Moss' organization have helped to smooth that transition.

"We had all the right people with us last year, but we weren't in a situation where we had the resources or budget to put myself and the car where we could win week in and week out," Thompson said. "Kelly Moss is an established race team that has been around forever and a former Porsche factory team, as well. They can give us everything under the moon to be successful.

"In addition to that, I have teammates now, and that has proven to be a huge benefit. The data we can share is invaluable."

Another benefit for Thompson is Kelly Moss' involvement with the Porsche Club of America. He participated in his first PCA event two weeks ago at the Clash at the Glen at Watkins Glen.

The team used the event as more a test weekend than a race weekend, but it gave Thompson extra laps on the 3.4-mile, 11-turn track in preparation for the next two rounds in the IMSA series.

"It was pretty hardcore," Thompson said. "There were a hundred cars out there on the track, and it showed how deep Porsche's involvement runs. We were the quickest out on the track in every one of the sessions, so that's a positive moving toward the pro race."

Watkins Glen always has been a mysterious track for Thompson. He has performed well, but victory has eluded him.

"It's one of those dream tracks and unbelievably fun to drive," Thompson said. "I've been wicked quick there and always seem to be fighting for the win, but there is always that one thing that gets me at the end."

Thompson's inspiration to win at the Glen also has been fueled by his family's relationship with the legendary sports car driver Al Holbert and Holbert Racing. As long-standing friends of the Holbert family, the Thompson family acquired Holbert's Porsche-Audi-VW dealership in Bucks County, Pennsylvania in 2010. Thompson proudly runs his Porsche 911 GT3 Cup car with Holbert's famous No. 14, hoping to enjoy some of the same success as Holbert Racing.

The late Holbert was the first driver honored with the title "Driver of the Decade" and was part of the inaugural induction class of "Legends of The Glen" due to his extensive success in sports car racing at The Glen.

"We have a huge connection with the Holbert family, and I really try to do them proud," Thompson said. "I try to use that energy as a positive and make the most out of every race with it. The Holberts are no longer in racing, but I try to carry it through the Thompson name and do everything I can to carry on that legacy. Let's hope I can channel some of their success here, especially with the championship on the line - we could really use it."

Thompson will try to channel that success during the next two rounds of the Porsche GT3 Cup Challenge USA by Yokohama June 26-28 at Watkins Glen International. There will be two 45-minute races with Race 1 starting at 3:10 p.m. (ET) Friday, June 27 with Race 2 following at 6:45 p.m. Saturday, June 28.