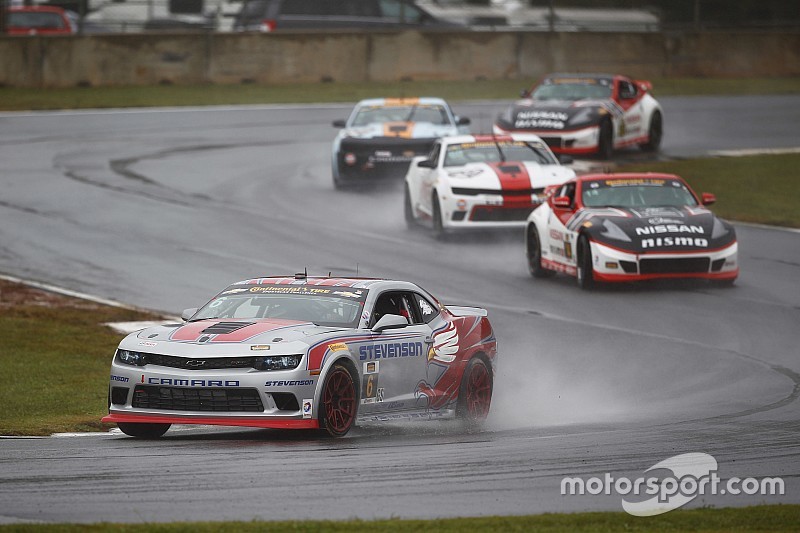 BMW back for 2016, Michael Johnson moves to IMSA.

But apparently horrid conditions are nothing Hindman can’t handle, as he brought the No. 46 Fall-Line Motorsports BMW M3 home in first place in Grand Sport and overall, along with co-driver Ashley Freiberg. Though more than a half-dozen cars turned in faster laps that the winning car, Hindman and Frieberg definitely won the battle.

“This was the most challenging race I had to finish all year,” Hindman said.

Winning the war, though, was the second-place finishers Robin Liddell and Andrew Davis, who clinched the Grand Sport title for Stevenson Motorsports and their No. 6 Chevrolet Camaro Z/28.R. All they had to do was finish last and the points championship would be wrapped up, but that isn’t the kind of racers Davis and Liddell are.

“I really wanted to win the race,” Liddell said, “but we didn’t have the pace.”

Liddell praised the IMSA officials for not throwing a caution flag for the wet conditions, but he says it was borderline at times.

In Street Tuner, Kyle Gimple and Sean Holton were first across the finish line with the class win and a 13th place finish overall for the No. 75 Audi S3 of Compass 360 Racing, the first win for the S3, which the team began racing at Sebring.

The Street Tuner championship, though, went to the C.J. Wilson Racing team of Chad McCumbee and Stevan McAleer, driving the No. 5 ModSpace Mazda MX-5, after the No. 26 team Mazda, driving by Andrew Carbonell and Liam Dwyer, crashed with an hour and 15 minutes left in the two-hour, 30-minute race when Carbonell couldn’t get the car slowed for the right-hander leading to the front straight.

SPEAKING OF C.J. WILSON: This was the first series championship for team owner C.J. Wilson, whose day job is pitching for the Los Angeles Angels baseball team. His major league contract prohibits him from driving in many competitive events, but Wilson said that when he finally hangs up his glove, he plans to jump into sports car driving “with both feet.”

MICHAEL JOHNSON TO RACE IN IMSA: Michael Johnson was a winning motorcycle racer when a crash paralyzed him from the waist down, but that didn’t mean he had to stop competing – he just moved to four wheels.

This season, those four wheels were on open-wheel cars, but a hard crash at the season opening race for Johnson, at St. Petersburg, required a long rehabilitation period.

During that time, Johnson decided to make a move to the Continental Tire SportsCar Championship series for 2016, where he will team with Stephen Simpson. He’ll drive a car prepared by JDC Miller Motorsport, which fielded the Mazda Road To Indy cars he raced for the past four years.

HELPING HAND: When driver John Pew hydroplaned on the front straight of Road Atlanta during practice Thursday, the resulting crash damaged the No. 60 Michael Shan Racing Honda-Ligier badly enough to make participation in Saturday’s Petit Le Mans season finale a real challenge. Pew and co-driver Ozz Negri are in fifth place in the TUDOR United SportsCar Championship Prototype season points, so trying to make the race is important to the team, drivers, sponsors and fans.

Since the Shank shop is back in Ohio, they needed some local help, and it came from the folks at DeltaWing and Elan, and Tim Keene, who joined the DeltaWing Racing Cars team in June of last year as team manager, following a 20-year career with Chip Ganassi Racing.

The team is based at Road Atlanta.

Said Keene: “I made contact with Mike Shank shortly after the accident, at the same time as Scott Atherton was trying to get him in touch with Élan. I told our crew chief, Stef (Chistel), who was still at the track, and he went to take a look at the car. He thought it could be repaired, so we let Mike know that we had guys lined up willing to work through the night ‘til it got done. They got the car to the shop around midnight. Stef and I left around 1:00 a.m. Mike Bryant (Élan Motorsports manufacturing director), Howie Udall and Paul Matthews worked through the night.

"I checked with Mike Bryant at 7 a.m. to see how things were going and he said the car would be ready to be picked up at 9 a.m. I sent Mike Shank a note and he was over the moon, he couldn’t believe it. They were expecting to get it later today and work through the night themselves. They’ll definitely make the race.”

“The worst part of the damage was the upper wishbone mounting point, which was pushed in. They were able to do a good repair that will be safe and let the car run well. It will need to go to Ligier for a proper, better-looking repair when the weekend is over but the main thing is to get them through this event.

“It’s nice to be able to do something for someone else, especially with the Justin Wilson cause. I spoke with Don Panoz [DeltaWing owner] this morning and we’re donating half the cost of the repair to the Wilson Children’s Fund.”

Justin Wilson was the IndyCar driver killed last summer at Pocono when a piece of debris from a crash flew into his cockpit. Wilson won the Rolex 24 at Daytona in 2012 with Michael Shank Racing.

BMW BACK FOR 2015: The Bobby Rahal-led BMW Team RLL announced it will be back in 2016 – the series will be called the IMSA WeatherTech SportsCar Championship next year – with the BMW M6 GTLM, replacing this year’s Z4-based model.

“A new car, a very competitive field and the 100th anniversary of BMW means 2016 will be an exciting year,” said Indianapolis 500 winner Rahal. His two Z4s are qualified fourth and sixth for Saturday’s Petit Le Mans, and his drivers Bill Auberlen and Dirk Werner are second in the season points battle, just three behind Porsche driver Patrick Pilet.