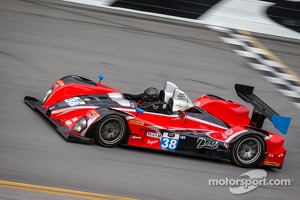 The team also welcomes Craig Duerson's son Hayden Duerson to the team for his first year competing in the International Motor Sports Association (IMSA) Development Series. Hayden comes from an extensive karting background, much like his new teammate Robert Alon, from California. Alon also is new to the IMSA series, but he was among the leaders during winter testing in late February at Sebring.

The youngest driver in the Performance Tech Cooper Tires Prototype Lites Powered by Mazda lineup also has one of the more extensive racing backgrounds. Matt McMurry, 16, who ran the final six races of the 2013 Prototype Lites season, will run his first full season in the series. Alongside racing in the series, McMurry will be working toward achieving his goal - racing in June in the 24 Hours of Le Mans in France and breaking the 55-year-old record held by F1 driver Ricardo Rodriguez as the youngest driver to compete in the global endurance classic.

With the selected cast of characters, Team Principal Brent O'Neill feels comfortable with his new team and their ability to produce starting with the first two rounds during the prestigious Mobil 1 Twelve Hours of Sebring Fueled by Fresh From Florida weekend.

"It was really easy to integrate all the new guys," O'Neill said. "We spend a lot of time deciding who our team was going to be, and from the get-go everyone got along great.

"The only edge we have is we have a big war chest; we have a lot of data. Do we feel like a force to be reckoned with? No, once you start to feel like a king, someone will knock you off your throne. We don't feel like a powerhouse. We're just going to try to win races."

Performance Tech Motorsports, along with the Cooper Tires Prototype Lites Powered by Mazda field, first takes to the track Wednesday, March 12 at 10:35 a.m. (ET). The six entries qualify at 9:20 a.m. Thursday, March 13 with the green flag flying over Race One at 5:30 p.m. Race Two will start at 11:15 a.m.