New or proven, all GTLM cars should be competitive at CTSCC Road America 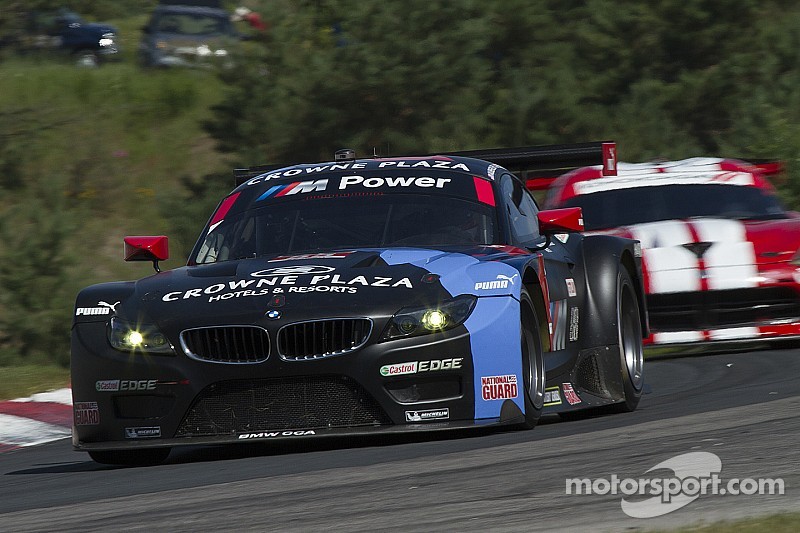 Is it better to have a new car or proven model in the GT Le Mans (GTLM) class in this weekend’s Continental Tire Road Race Showcase at Road America?

More than the model year car, it is more a matter of which team clicks on any given weekend

Bryan Sellers, driver of Team Falken Tire’s No. 17 Porsche 911 RSR, feels that the model year will not be the determining factor in the class this weekend.

“Our Adjustment of Performance is so close right now, it’s anybody’s game at this moment,” Sellers said. “More than the model year car, it is more a matter of which team clicks on any given weekend. If you roll off the truck well, that’s a pretty telltale sign that you’ve got a good opportunity. Competition is so tight, you need any advantage you can get.”

“The single biggest advantage with the new car is the changed wheelbase and weight distribution gives us greater durability for our rear tires,” Sellers said. “That’s been huge for us, and it should be very beneficial for us this weekend. Road America is normally very hard on left-rear tires, and in the past it’s been tough on Porsche left-rears. Hopefully, the new car will help fix that problem, because we’ve always had speed there but struggled with durability.”

Road America is definitely a course that suits the Viper GTS-R very well,

Porsche North America opened the year with the No. 911 Porsche 911 RSR with lead drivers Nick Tandy and Richard Lietz winning the Rolex 24 At Daytona, while the No. 912 Porsche won the Mobil 1 Twelve Hours of Sebring Fueled by Fresh From Florida with regulars Patrick Long and Michael Christensen. The best finish for Sellers and Henzler was fourth at Mazda Raceway Laguna Seca.

The move to the Chevrolet Corvette C7.R quickly paid dividends for Corvette Racing. Antonio Garcia and Jan Magnussen gave the new car its first victory at Long Beach, with the No. 3 Corvette C7.R., following up with consecutive triumphs at Mazda Raceway, Watkins Glen and Canadian Tire Motorsport Park. Tommy Milner and Oliver Gavin drive the team’s No. 4 entry, which earned a best finish of third at Long Beach.

This will not be the first appearance of the C7.R at Road America, though. The team stayed over following last year’s event to test the new car for the first time, and returned to Road America the week following Mazda Raceway for an extensive test in preparation for the 24 Hours of Le Mans.

SRT Motorsports saw Dominik Farnbacher and Marc Goossens place third in the Rolex 24 in the No. 91 Dodge Viper SRT GTS-R, and Kuno Wittmer and Jonathan Bomarito finished second at Sebring. After struggling early in the season, the team scored back-to-back double-podium finishes before Bomarito and Wittmer won at Indy two weeks ago.

“Road America is definitely a course that suits the Viper GTS-R very well,” Wittmer said. “Coming off a win and having won there last year with the sister car, it’s time to go back and win again at Road America. However, while the circuit is favorable to the Viper, Jonathan getting the lap record and pole position, and the sister car taking the whole thing; I don’t believe our homework is done and I’m sure other manufacturers are doing their work too. We have to put our head down and focus one race at a time.”

BMW M3s won at Road America in 2009 (Bill Auberlen and Joey Hand), 2010 (Hand and Jorg Mueller) and 2012 (Auberlen and Mueller). Last year, BMW Team RLL finished seventh and eighth in the debut of the BMW Z4 GTE at the circuit.

“We have had a pretty good record of success at Road America,” said Bobby Rahal, Team Principal. “We won it three times with the M3s and have always had a good feel for that track. Last year was our first year to race the Z4, and there was a pretty big disparity between our top end speed with Corvette and everybody else, and that really hurt us for sure. I think the car is a better car this year, and we will go back and give it our best shot to win another race.”

The Ferrari 458 also struggled at the circuit a year ago, with Olivier Beretta and Matteo Malucelli finishing 10th. This year, Risi Competizione carries momentum from its best outing of the season to Road America. Giancarlo Fisichella and Pierre Kaffer co-drove the No. 62 Ferrari to a second-place result in the Brickyard Grand Prix.

Who will win in GTLM at Road America? History has proven it could be any one of the 10 cars that are entered.