Performance Tech Motorsports has resigned driver Danny Mancini for his fifth season in the Cooper Tires Prototype Lites Powered by Mazda Series as part of the Masters Championship.

As the old saying goes, "Don't fix what isn't broken." Mancini began his racing career with Performance Tech in the Prototype Lites Series and sees no reason to change things in 2014. His dedication to the team comes in his trust of team owner and manager, Brent O'Neill.

"Brent is a unique team owner," Mancini said. "I really believe that he gives you something for every penny you pay. His reputation precedes him."

Thanks to the hard work O'Neill and the Performance Tech crew put in for their drivers, Mancini has developed a high level of comfort with the team. He knows what to expect when he goes to a track and is able to come and go with ease. Knowing that his car will be fine tuned to the track, all Mancini has to focus on is the track itself. 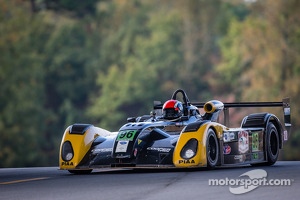 "I trust Brent to take care of us," Mancini said. "It's hard to duplicate that. Honestly, if I were not racing with Performance Tech then I wouldn't be racing. It's because of all the boys that I am here."

The high level of trust and comfort allows Mancini to set high goals for himself. Due to personal commitments with work outside of racing Mancini felt as though he let the 2013 season escape him, making his to-do list for 2014 longer than most.

"Personally, I didn't think I did that well in 2013," Mancini stated. "For 2014 I'd like to find myself closer to the front of the pack. I want to spend more time practicing. This year due to projects at work I was coming in last minute and leaving right after races. I think I could win the Masters Championship and that will include me taking time to get physically fit, but I think I can do it. I'd like to be as good as Jon Brownson (Prototype Lites competitor)."

Mancini looks forward to the future with NASCAR now at the helm, believing with the right management a positive outcome is more than viable. With goals set, the Florida-native gave insight into his own future in racing.

"The PC car is the greatest thing since sliced bread," Mancini said. "But I think, for me, the intensity would detract from the enjoyment. It would take too much commitment. I would love to do the 24 Hours of Daytona. So maybe one year, but not this time around."

IMSA statement on the retirement of Allan McNish