A recap of the busy Continental Tire SportsCar Challenge race.

“I am absolutely thrilled with the victory,” said Davis.

“It’s a big deal for us and the team as this has been a work in progress,” added Liddell. 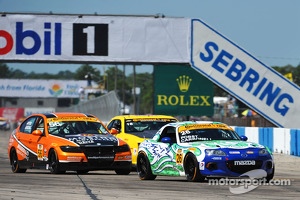 The race finished under yellow due to a hard crash involving Marc Miller. Miller’s Mazda MX-5 slammed into a tire wall near turn five and then richocheted back across the track, with substantial damage to its front end. It took a while for safety workers to remove Miller from the car. Awake and alert, Miller was taken to the infield care center and then transferred to a local hospital for further evaluation. UPDATE: Miller has been treated and released from hospital.

Randy Pobst and Andrew Carbonell won the ST class in the Freedom Autosport Mazda MX-5. A CJ Wilson Mazda MX-5 ended up second, while the Mosing Motocars BMW 328i rounded out the top-three.

“I could not be happier about this moment,” said Carbonell, who first acquired his competitor’s license at Sebring.

A replay of the big accident at the end of the race, click HERE.