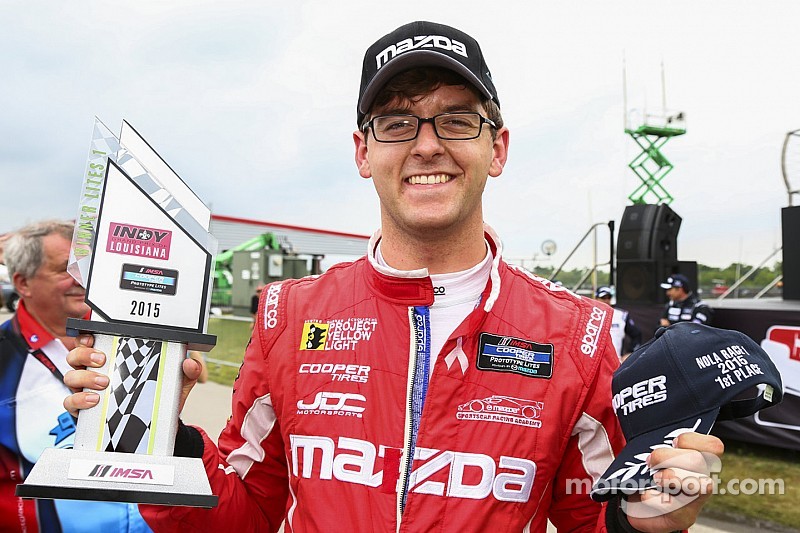 The Prototype Lites driver takes you through a weekend that saw him emerge victorious in New Orleans.

I'm Kenton Koch, a 20-year-old racer from Glendora, California. I currently race in the Cooper Tires Prototype Lites Powered by Mazda for JDC Motorsports as a Mazda scholarship winner after capturing the Mazda MX-5 Cup championship in 2014. I'm excited to be writing columns for Motorsport.om and look forward to sharing my experiences on and off the track this season with you!

It was very cool to be in New Orleans, home of jazz and the famous Bourbon Street. Just 15 minutes from the French Quarter is the 2.74-mile track at NOLA Motorsports Park, where Rounds 3 and 4 of the Cooper Tires Prototype Lites Powered by Mazda were hosted on April 11-12.

We were a support series for the Verizon IndyCar Series during the inaugural Grand Prix of Louisiana and ran alongside the Mazda Road to Indy series, such as the Pro Mazda Championship Presented by Cooper Tires and the Cooper Tires USF2000 Championship Powered by Mazda. There were 82 Mazda-powered cars fielded this weekend, again proving that on any given weekend, more Mazda’s are road-raced than any other brand.

A win is a win

Now on to the races. I found myself on pole after qualifying for Race 1 in wet conditions. The race went well as I was able to take the win, but it ended up finishing under caution after a pretty big pile-up after going green during a restart.

A car spun into the wall on the exit of the last corner to create the first caution, but the five-car pileup during the restart ended our race. Thankfully none of the other drivers were injured in these incidents.

I was happy with the win but disappointed we couldn’t get in more racing. But a win is a win.

I started on pole for Race 2 for a very, VERY wet race. I sure was glad I started out front because I don’t know how anyone could see behind me!

A couple of cars spun off and made contact after three laps of racing, putting us under caution. Eventually the race was cut short due to the rain being too heavy and track conditions too wet. Before the caution flew, I built a 10-second gap over second place and claimed the win under a red flag.
This was a fulfilling event off the track, too.

Prior to on-track action

On Thursday of race week, I had the chance to visit with young patients at the Ochsner Cancer Center in New Orleans along with IndyCar driver Simona De Silvestro and Porsche GT3 Cup USA driver David Ostella. We went room to room talking with the kids and making their days brighter. I really enjoyed the experience and can’t wait to work with Racing For Kids again.

I was a guest on sports talk show, “SportsTalk,” on WWL Radio in New Orleans with hosts Bobby Hebert and Deke Bellavia. Bobby is a former star quarterback for the Saints.

We had a blast talking about how the racing world worked and what it took to become a successful racing driver. They didn’t realize I was a racing driver until I told them because they didn’t think someone of my height could fit in one. I’ll give them the benefit of the doubt!

Our next racing weekend in Cooper Tires Prototype Lites Powered by Mazda isn’t until the end of June at Watkins Glen, but I’m staying busy.

On Saturday, April 25, I will be at the Donate Life Run/Walk in Irvine, California, encouraging more people become organ donors. My mother recently received a heart from a donor. Thanks to that donor she has her life, so we will share our story to help influence others to register as organ donors.

At the end of May, I will travel to Germany to attend the FIA Young Driver Excellence Academy Workshop. Then it’s on to upstate New York in June to get back into my race car at Watkins Glen!