Kelly-Moss Motorsports is prepared and ready for a bold entry into the 2014 Porsche GT3 Cup Challenge USA by Yokohama racing season. The team arrives at Sebring International Raceway with six Porsche GT3 Cup cars entered for the two opening rounds of competition March 13-14 during the Mobil 1 Twelve Hours of Sebring Fueled by Fresh from Florida.

A strong effort is nothing new for Kelly-Moss. The team has regularly fielded multiple entries in numerous series for more than 25 years, winning races and championships around the world. Along with that experience comes speed, which the team most recently displayed at testing Feb. 24-25 at Sebring with a top overall lap of 2:05.310. Kelly-Moss cars took four of the top eight positions on the speed charts during the test.

"The IMSA Winter Test went very well, and we were quite happy setting fastest times of the two-day test in both classes," said Kelly-Moss Motorsports racing director/vice president Jeff Stone. "The competition was very good with a lot of strong teams."

The results-focused Kelly-Moss powerhouse has invested in an impressive coaching lineup for its drivers to stay at the top of the charts all season long. Returning coach and 2011 GRAND-AM Rolex Sports Car Series GT champion Andrew Davis is joined by 24 Hours of Le Mans GT2 and Rolex 24 At Daytona winner David Donohue, 24 Hours of Le Mans LMP 2 winner Jeroen Bleekemolen and championship sports car driver and coach Chris Hall.

"These are all great guys, and it makes for a very cohesive team feeling under the tent," Stone said. "We are excited to get the 2014 season started and run under the newly merged IMSA group and see how the new series develops. It has been a long and busy winter, as we have been working nonstop since receiving the new 2014 GT3 Cup cars in November, testing and learning the new car and what makes it tick. Our team has a lot of 'new' going on this year, including new drivers, our new fantastic European engineers Chiel Bos and Patrick Van Der Groot, as well as new crew members." 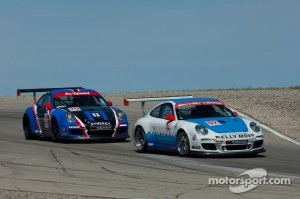 One of the oldest and most historic circuits in North America, Sebring International Raceway boasts 17 challenging turns threaded on 3.74 miles of bumpy and winding asphalt and concrete that test amateurs and pros alike at one of the most significant sports car races on the globe.

Kelly-Moss's Barnhart collected two top-10 finishes in GT3 Cup Platinum competition last year, and the team is ready to meet the challenges ahead fortified with knowledge and wisdom from past success to ensure they are in the hunt in Porsche GT3 Cup Challenge USA by Yokohama competition in 2014.

"We have no doubt this will be a hard-fought season with lots of great talent in the paddock, both from drivers and other teams," Stone said. "For certain, nothing will come easy and we are sure there will be highs and lows for all throughout the year, but we have our sights set squarely on championships in Platinum Cup, Platinum Masters and Gold Masters, and we will start the year with a championship mindset."