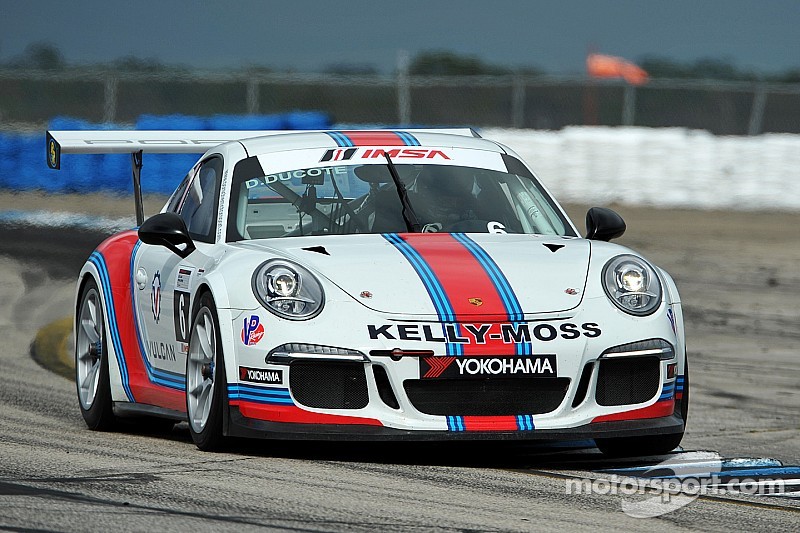 2014 Platinum Cup Driver Champion Colin Thompson will race in one of the Kelly Moss Porsche 911 GT3 Cup cars, with the other driven by Kelly Moss standout David Ducote.

"With the international one-make concept using the Porsche 911 GT3 Cup car as the common denominator around the globe, we have been able to present, as a development tool, the North American championships teams with an opportunity to compete in the Porsche Mobil 1 Supercup races in Austin," said Jens Walther, president and CEO of Porsche Motorsport North America. "Supercup is the pinnacle of the Porsche one-make series worldwide and will provide Porsche GT3 Cup Challenge USA by Yokohama champion Colin Thompson and multi-race winner David Ducote the chance to test their mettle against the highest level of Porsche GT3 Cup competition available anywhere. This will be an excellent opportunity and a substantial challenge for them as drivers and Kelly Moss Motorsports as a team. We wish all of our North American competitors the best this weekend."

Thompson, 20, from Doylestown, Pennsylvania, earned his first Porsche GT3 Cup Challenge USA by Yokohama championship this season after a thrilling battle with fellow young stars Angel Benitez Jr., Michael Lewis and Sloan Urry. Thompson won the final round of the season in a heavy downpour Oct. 3 at Road Atlanta to win the title by eight points over Benitez and 13 points over Lewis.

Ducote, 46, from Houston, earned three victories and five podium finishes in six starts in the Gold Cup (2010-13 model year race cars ) class in 2014. He is a veteran of the Madison, Wisconsin-based Kelly Moss team and of Porsche GT3 Cup Challenge competition.

Kelly Moss Motorsports will be eligible for prize money at COTA and also receive engineering and car preparation support from PMNA. The two entries available to the champions of the Ultra 94 Porsche GT3 Cup Challenge Canada by Michelin will not be filled.

Since 1993, the Porsche Mobil 1 Supercup has run exclusively as support to Formula One as the only Grand Touring race series. In this attractive environment, the flagship series of the 19 Porsche brand trophy championships worldwide has prospered. The Porsche Mobil 1 Supercup, in which the new Porsche 911 GT3 Cup car is racing this year, is not only regarded as an excellent recommendation for drivers in GT and prototype racing, but also offers partners and teams a perfect business platform.

The secret is in the mix: Talented youngsters and ambitious teams use the Porsche Mobil 1 Supercup to draw attention to themselves. Many of them are now enjoying success, especially in endurance racing. Porsche Junior Klaus Bachler competes in the Porsche Mobil 1 Supercup in 2014, alongside Earl Bamber as winner of the International Cup Scholarship and funding candidate of Porsche AG. The championship title is regarded as a top recommendation for a career in touring car or GT racing.