Inside Look: The man behind Porsche's International one-make series

Michael Dreiser manages 18 of the 20 Porsche racing series around the globe including the IMSA sanctioned GT3 Cup Challenge by Yokohama.

BRASELTON, Ga., (July 11, 2013) - Hotel rooms and airports may be more familiar than Michael Dreiser's own bed at times. Traveling around the globe managing 18 of the 20 Porsche racing series makes for extensive travel and a web of relationships even LinkedIn would have trouble connecting. As the Manager for all international Porsche AG One-Make series, Dreiser spends weekends trackside and week days in his Weissach, Germany office.

What Dreiser calls a "particular" career path molds well with his personality. His first handshake with Porsche was as an intern in the marketing department. He stood out from the beginning, which led to a similar internship in Singapore where he fell in love with the Asian culture. For four-and-a-half years he managed the Porsche Carrera Cup Asia before sliding into his current role. 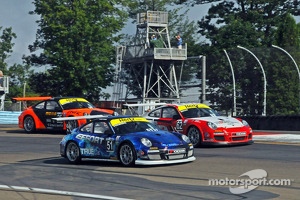 "I really like the mentality and motivation of the people at Porsche," Dreiser said. "They work to get the job done and really deliver a good product customers can enjoy. With my job I'm able to really see how the plan at my desk translates."

At Circuit Gilles-Villeneuve for the 2013 Grand Prix du Canada, Dreiser attended the exciting Ultra 94 Porsche GT3 Cup Challenge Canada by Michelin Series competition. After the final race on Sunday, June 9, Dreiser joined the top finishers on the podium for photos. As the Porsche 911 GT3 Cup car drivers grinned and anxiously awaited the spurts of champagne, Dreiser recalled what makes the long hours and lengthy trips worthwhile.

"The best part about this job is at the end of a Sunday when you have cheering winners on the podium and you're looking to happy faces," Dreiser said. "That's where you get your satisfaction."

For Dreiser it is important not to fly in just for the race. He arrived in Montreal, Quebec for rounds three and four of the Ultra 94 Porsche GT3 Cup Challenge Canada by Michelin Series the Thursday before the races. The 35-year-old spent time in the paddock talking with drivers, team owners and representatives of the IMSA Development Series.

"I like working with people," he said. "You learn so much in terms of how to deal and how to cope. I don't think this is a job for everyone but as long as you get along with the people that's half of it."

Most of Dreiser's time is spent finding solutions between headquarters' requirements and what is possible locally. Since the inception of the Ultra 94 Porsche GT3 Cup Challenge Canada by Michelin Series in 2010, the number of races and participants have both increased. In its inaugural year, the series started off with three events and a dozen drivers. After a huge growth in the second year, Dreiser saw 20 entries at the 2013 Grand Prix du Canada.

"We're in our third year and our numbers are good," Dreiser said. "I can see the enthusiasm with the drivers when I talk to them. They're really enjoying it and I'm very happy with the local representatives backing up Porsche from day one and I think everyone is convinced of the project."

On the U.S. side, the IMSA GT3 Cup Challenge by Yokohama Series recently celebrated its 100th race at Watkins Glen International on June 29. On the same historical weekend, GT3 Cup handed a trophy to its first-ever female overall GT3 Cup Challenge North American winner in Ashley Freiberg. Freiberg is the sole leader for the points standings heading into the Grand Prix of Mosport, but 17-year-old Madison Snow is on her heels just four points back in the Platinum Cup standings. Tight battles throughout the field in a sophisticated 100th race represented Porsche well.

"I think this kind of achievement is a testament that when we do something we are in there for the long run," Dreiser said. "This is just proof that this has worked and it's a project everyone can rely on."

The lifelong car aficionado has proved to be more than reliable for Porsche thus far. Both the Canadian and U.S. series have increased in terms of races and drivers and being surrounded by cars never gets old for Dreiser. While he loved the Asian culture as a Porsche intern, he missed the need to drive to and from work. Growing up in Germany, he was used to driving a couple hundred kilometers to visit relatives.

"Sometimes it's hard because you look into a driver's face and you know they're really enjoying the driving part and sometimes that's the part you miss out on," Dreiser admits.

His title does not show it, but Dreiser was never a big planner when it came to his career and he plans to keep an open mind for what is ahead in years to come. Right now, he is pleased with the series' progress and looks forward to the annual workshop when all Porsche organizations interconnect and share ideas to intensify relationships with the series and local subsidiaries.

Both of the IMSA Development Series are on track at the Canadian Tire Motorsport Park July 19-21, starting with the IMSA GT3 Cup Challenge by Yokohama participants on the circuit Saturday, July 20 for Race One of the weekend at 1:20 p.m. The first Ultra 94 Porsche GT3 Cup Challenge Canada by Michelin race of the weekend is slated for 6:05 p.m. Saturday, July 20 as well.