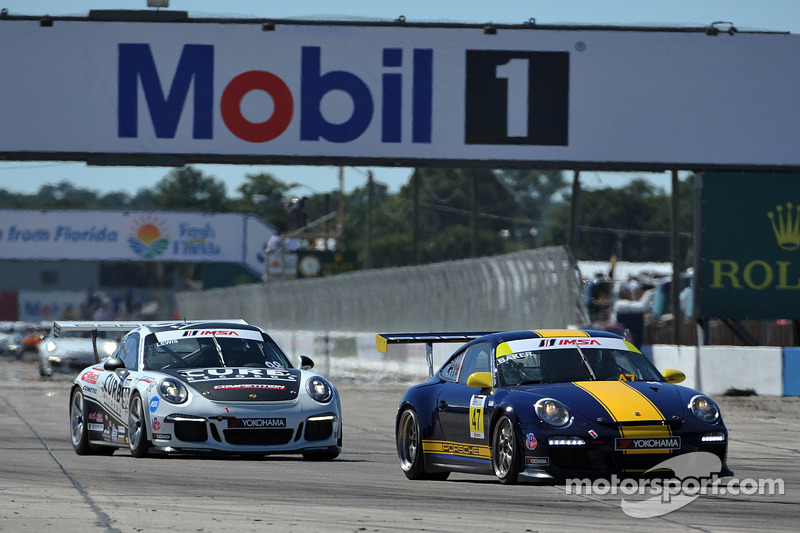 DAYTONA BEACH, Fla. (June 23, 2014) - It's ironic and thrilling that as the Porsche GT3 Cup Challenge USA by Yokohama heads to one of the most flowing tracks on its 2014 schedule, the races for driver and team championships in nearly every division remain extremely tight.

Rounds 6 and 7 of one of the most exciting single-make series in the world will take place Friday, June 27 and Saturday, June 28 on the 11-turn, 3.4-mile mile circuit at Watkins Glen International. The historic circuit in the picturesque Finger Lakes region of upstate New York features fast, flowing sections and iconic turn complexes, such as The Ninety, The Esses and The Boot.

The race for the Platinum Cup Drivers Championship couldn't be any closer through five rounds. Young stars Angel Benitez Jr. and Colin Thompson are tied atop the standings with 76 points, with Michael Lewis third with 72.

Benitez, from Valencia, Venezuela, has won three of the first five rounds this season in the No. 05 Formula Motorsport/Avid Motorsport Porsche 911 GT3 Cup car as he seeks his first season title. He won the latest round, May 24 at Lime Rock Park in Lakeville, Conn.

Series veteran Benitez may have one advantage over Thompson and Lewis at The Glen: He knows the route to victory lane. Benitez won one of the two rounds last June at the track.

Thompson, from Doylestown, Pennsylvania, is looking for his first victory of the season in the No. 14 Kelly Moss/Porsche of Bucks County entry. Thompson has been a model of consistent speed, with three second-place finishes in five starts this season. He also dominated a recent Porsche Club of America event at The Glen, which will give him valuable insight about racing lines and setups at the historic track.

Lewis, from Laguna Beach, California, has adjusted quickly to the Porsche GT3 Cup Challenge USA by Yokohama in his first season in the series after spending the last three years in elite European junior open-wheel championships. He swept both races in early May at Mazda Raceway Laguna Seca in the No. 98 Competition Motorsports/Curb-Agajanian entry.

A handful of other drivers should challenge for the Platinum Cup (2014 model cars) podium in both races at Watkins Glen.

Patrick-Otto Madsen Patrick-Otto Madsen is just two points out of the Gold Cup championship lead. Sloan Urry, from Park City, Utah, has three podium finishes this season in the No. 20 JDX Racing Porsche and is fourth in the standings with 62 points. Runaway Platinum Masters (drivers age 45 and older) championship leader Kasey Kuhlman, from Cincinnati, finished third overall in Round 4 of the season at Mazda Raceway Laguna Seca in the No. 15 Wright Motorsports entry.

Christina Nielsen, from Aarhus, Denmark, finished second at Lime Rock Park in the No. 25 NGT Motorsport entry for her first career podium in the series. Nielsen is racing in North America for the first time this season after competing in various open-wheel and Porsche series in Europe and the Middle East.

Fred Poordad, from San Antonio, Texas, leads the Drivers Championship with 80 points in the No. 02 Competition Motorsports 911 GT3 Cup car. But Patrick-Otto Madsen, from Boca Raton, Florida, is right behind at 78 points in the No. 99 ANSA Motorsports Porsche. Poordad has one Gold victory this season; Madsen has two.

Poordad, Madsen and the rest of the Gold Cup field will face an additional challenge from the return of a familiar, fast face to the series.

2009 Gold Cup champion Melanie Snow will make her first Porsche GT3 Cup Challenge USA by Yokohama start of the season in the No. 57 Wright Motorsports Gold Cup entry. Snow, from Lehi, Utah, also will give Wright Motorsports a boost in the Team Championship.

The Porsche GT3 Cup Challenge USA by Yokohama continues its 10th season at Watkins Glen, offering two unique classes of racing to fuel the competitive spirit of drivers and teams.

Curran takes Camaro to pole at the 'Glen