Johnny is eager to get behind the wheel of the #88 Porsche Cayman at Sebring.

Johnny Kanavas makes the move to Rebel Rock Racing for the second round of the IMSA Continental Tire Sports Car Challenge at Sebring International Raceway next week. Kanavas moves from Skullcandy Team Nissan, which he drove for in the opening round at Daytona in January. 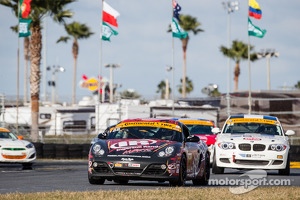 Teaming up with RRR Team Principal Jim Jonsin, Johnny is eager to get behind the wheel of the #88 Porsche Cayman at Sebring. The race will be held in support of the 62nd annual Mobil 1 Twelve Hours of Sebring Fueled by Fresh From Florida and the first of newly formed Tudor United Sports Car Championship.

"I’m thrilled to be in a Rebel Rock Racing Porsche," said Kanavas. "Jim Jonsin and Al Carter have put together one of the best teams in the CTSCC paddock and I’m excited to be part of it. The RRR Cayman is very well prepared and I believe Jim and I bring a strong driver pairing in the #88 car. I want to thank Brewster Porsche, Jim Jonsin, and Al Carter for the opportunity and can't wait for Sebring."

"We are stoked to have Johnny on board," comments Jim Jonsin. "Sebring is home to RRR and I've had a few laps around this circuit, I think the pairing with Johnny Kanavas is a recipe for success. Look for the #88 out front next week!"