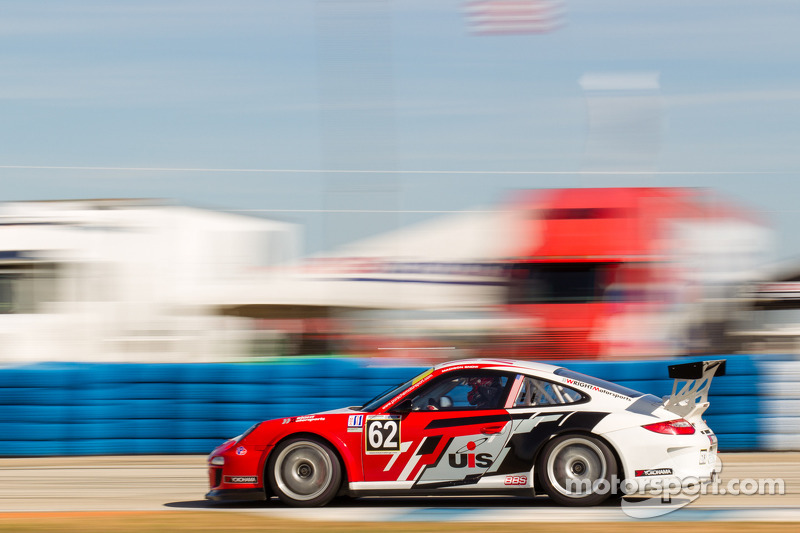 Kuhlman showed no less speed and bravery than the series "young guns" but exercised patience to keep the pressure on throughout the 45-minute race feature to earn the Masters class win in Elkhart Lake, Wisconsin.

Elkhart Lake, Wisc., (Aug. 10, 2013) - No one could ever accuse the IMSA GT3 Cup Challenge by Yokohama Series of being dull, lackluster and uninviting. Today's feature race at Road America proved that point as a field of 33 911 GT3 Cup entries not only took the checkered flag for Round 9 of series competition, but they virtually blasted through it.

Madison Snow of Snow Racing/Wright Motorsports "kicked it up a notch" from his BBS Pole position at the start of the race, and cleanly captured not only the Platinum Cup race win, but set a new race lap record of 2:13.444 in a heated battle with EFFORT Racing's Sloan Urry.

Snow's performance was solid and consistent as he swapped positions twice with Urry in what can best be described as a wild and chaotic ride as two full-course cautions kept nerves taut and tensions high until the checkered flag fell on the 45-minute sprint.

"That was a great race," said Snow, the youngest series competitor. "I mean it was very chaotic, but I'm glad that was over with. When I knew we were going to go one lap at the end and I knew that was going to be complete chaos. I just had to hold Sloan (Urry) off but I managed to do it and that was great."

Urry, who got the jump on Snow earlier in the feature, conceded his lead at the halfway point to Snow due to some handling issues and settled for second place on the Platinum podium.

"The set up we had on the car, we were hoping for the long run and the car to come into me later," Urry said. "Madison (Snow) drove a great race, and he had a great pass on me. I couldn't hold him off. Hats off to him he deserved it. Hopefully next time I can put it up front and stay there. But always got to be happy to be on the podium and just taking the fight to the championship every weekend."

Urry's EFFORT Racing teammate Michael Mills dogged his heels throughout the race and ultimately claimed the last spot on the podium, but Mills was in a fierce skirmish with TruSpeed Autosport's Brett Sandberg.

"It was a good day," Mills said. "I wasn't really happy with my qualifying results. So it was good to just stay clean and finish third. The car kind of came in towards the end, but then we had another yellow and that allowed us to just keep the car there so that was positive. EFFORT has really put together some great cars for us this weekend. They have been working hard. Sloan (Urry) did a great job I thought he was going to hold off Madison (Snow) but Madison (Snow) was just a little too strong we'll see what happens next race."

A full course caution ensued just after the green flag flew due to a spin by NGT Motorsport'sAngel Benitez Jr., that collected several series competitors further back in the field, causing a significant caution period that lasted several laps and forced four drivers to retire from the race. Benitez was tied for the Championship points lead with Snow heading into Round 9 of competition. He recovered to finish in seventh overall.

The Gold Cup class not only held it's own today, but provided plenty of on-track warfare as Franck Silah of MGM mixed it up with the Platinum class and kept his foot firmly in the throttle to take home the Gold Cup trophy.

"For me this is an awesome weekend," Silah said. "This is my favorite place ever. I had a pole position here and it was almost a series lap record. This was enough for me because I love to be here. And now I won and I am very very happy."

Silah was trailed by David Williams of TPC Racing and series newcomer Kristin Treager to finish second and third respectively in class.

"It was very crazy," Williams said. "But it ended up being a good race. The restarts were crazy everyone got jammed up coming up the hill and Turn-1 and Turn-3 was just nuts but ultimately great race and great venue."

Treager, who narrowly missed getting collected in the first lap caution was enthusiastic about her first experience in the IMSA Development Series.

"(This was my) First race with IMSA, and I couldn't be more excited," Treager said. "It was pure carnage out there but we ended up with a podium and I'm really happy about it. I'm a champion at the club level so this is a whole new ballgame for me."

Capturing the Yokohama Hard Charger award for Round 9 was Ben Keating of TPC Racing who started today's event in 23rd position and pushed his way through the field to finish 11th overall.

Round 10 of the IMSA GT3 Cup Challenge by Yokohama will take the green flag on Sunday, August 10 at 11 a.m. CT as part of the GRAND-AM Rolex Sports Car Series/American Le Mans Series presented by Tequila Patrón double-header weekend at Road America.

The Master Classman showed no less speed and bravery than the series "young guns" but exercised patience to keep the pressure on throughout the 45-minute race feature.

Kasey Kuhlman in his No. 15 Wright Motorsports 911 GT3 Cup Platinum entry kept his cool and stayed focused to finish in the top 5 overall and first in Platinum Masters.

"That was wild," Kuhlman exclaimed. "That was one of the wildest races I've been through. The action was so tight and every car was so close to each other. And credit to the guys who made it through, the car control was unbelievable to get through that stuff. But I feel bad for the competitors that were taken out, there was a lot of unfortunate stuff out there today. That was probably one of the best drives I had. Just because I had to be so aggressive and then at the restart I had to be appropriately defensive to hold my position so I feel great about it."

"It was a great race, a great race," Levitas said. "The Porsche of Towsen TPC car just did incredible. We made a little bit of a change before the race I thought it would give me some rear grip but it gave me a little too much, and it cost me about a half of a second a lap, and it really hurt. But what really hurt is that I had the lead up until the very last lap. But we still pulled off P3. My teammate Dave Williams--my hat goes off to him. Dave Williams did a supreme job he brought that car into second place and he was a steady guy he was strong and there at the end and that's what matters."

Competition Motorsports rounded out the top three in Gold Masters with Wesley Hoaglund at the wheel. Hoaglund was involved in the first lap incident and was retired from competition.

"I just got pushed into the tires," he said. "We are trying to figure out how it all happened but there will be tomorrow, and we'll get it all fixed."

The Gold Masters championship was full of familiar faces as once again TPC Racing swept the top two steps with David Williams and Michael Levitas.