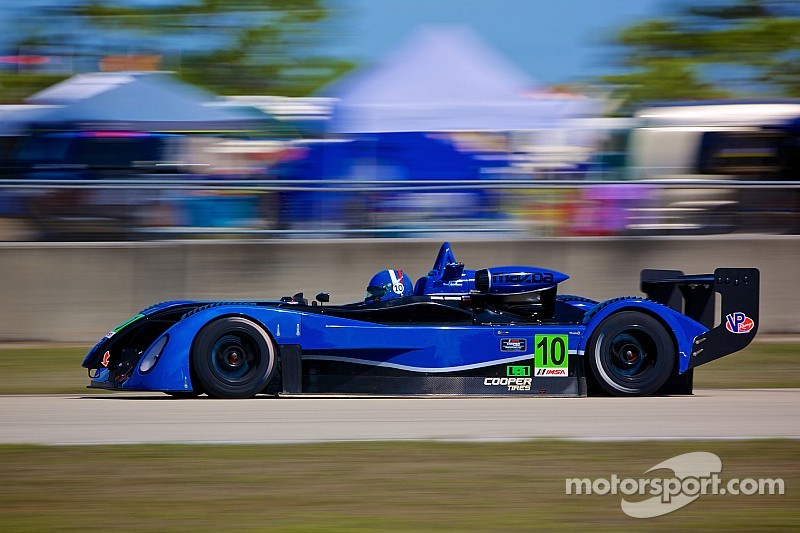 And he also wins the season finale at Road Atlanta.

Mikhail Goikhberg ended the Cooper Tires Prototype Lites Powered by Mazda championship season in the same place he started - atop the podium.

Goikhberg, from North Vancouver, British Columbia, won the season-ending Round 14 on Friday, Oct. 3 at Road Atlanta by beating Enzo Potolicchio to the finish by 1.533 seconds in a steady rain.

Series champion Goikhberg earned his ninth victory in 14 starts this season in the No. 10 JDC Motorsports entry. He started the season by winning five of the first six rounds, including both races at the season opener in March at Sebring International Raceway.

"Overall, it's a great way to end the season," Goikhberg said. "I really wanted to win at least one of the races here, and to do it in these conditions is a great feeling, especially since it's the last race of the season."

Potolicchio, from Hollywood, Florida, earned his first podium finish of the season and also was the top Lites 1 Masters' finisher in the No. 4 8Star Motorsports Élan DP02 chassis powered by a Mazda engine.

Newly crowned Masters champion John Falb, from Las Vegas, finished third overall and was the second Masters' finisher in the No. 77 ONE Motorsports car. It was Falb's second overall podium finish of the season.

Goikhberg led from pole in moderate rain at the start of the race. But he spun off track in Turn 10 in the opening minutes under pressure from Madison Snow, handing the lead to Snow in the No. 29 Extreme Speed Motorsports car. Snow, 18, from Lehi, Utah, started sixth but moved up quickly with smooth driving in the wet.

TUDOR United SportsCar Championship GT Daytona driver Snow expanded his lead to 5.071 seconds with 25 minutes left in the 45-minute race and appeared poised for his first career victory in the series.

Goikhberg went off and on the track again between Turns 10 and 11, allowing Snow to build his lead to 8.160 seconds. But the field bunched during a full-course caution with 15 minutes remaining when two 16-year-old young stars - Thursday's winner Matt McMurry and Snow's younger brother, McKay Snow - made contact and ended up in the gravel while racing hard for position.

Then heartbreak arrived for Madison Snow. His car lost power on the ensuing restart with nine minutes remaining, and the field sped past. Snow's race was over.

Goikhberg took the lead and powered away for victory.

"It was a little bit hectic," Goikhberg said. "We had a big handling issue, so it was a very difficult race in terms of managing the car. I feel bad for Madison (Snow), having some kind of issue there. I would have liked to fight with him."

The race for the final two spots on the podium raged over the closing laps.

The runner-up finish by Potolicchio was one of the recoveries of the season. He was involved in a spin with two other cars, including his son, Christian, on a restart less than 10 minutes into the race. But he stayed calm and kept all four wheels on the 12-turn, 2.54-mile circuit for the rest of the race to earn a hard-fought podium position.

"I'm looking forward to next year," Enzo Potolicchio said. "We are getting better and better with the car. We are learning the car very quickly, and I think we have the right setups now for every track."