EBRING, Fla.– The No. 02 Ford EcoBoost/Riley DP and driver Sage Karam gave Chip Ganassi Racing the maximum five points toward the Tequila Patrón North American Endurance Cup when the 19-year-old from Nazareth, Pa. led at the four-hour mark of Saturday’s Mobil 1 Twelve Hours of Sebring Fueled by Fresh From Florida.

Karam passed Sebastien Bourdais for the lead only nine minutes before the race reached the one-third race distance in which points were awarded. Bourdais did his best to regain the lead, but came up 0.554-seconds shy at the completion of the fourth hour. Karam is sharing the No. 02 entry with IndyCar regulars Scott Dixon and Tony Kanaan. 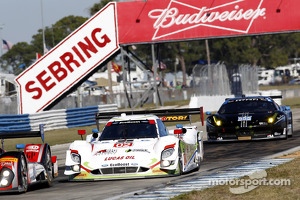 The No. 5 Action Express Racing Corvette DP in the hands of Bourdais earned four points toward the $100,000 Patrón Endurance Cup after the first of three segments at Sebring. Bourdais is once again sharing the No. 5 Corvette DP with Joao Barbosa and Christian Fittipaldi, with whom he co-drove to the Rolex 24 At Daytona victory in January.

The No. 1 Tequila Patrón-backed HPD ARX-03b/Honda from Extreme Speed Motorsports was third after four hours with David Brabham at the wheel. Brabham’s co-drivers are Ryan Dalziel and Scott Sharp. All additional competitors in the Prototype (P) class earned two points.


Frankie Montecalvo led the Prototype Challenge (PC) at the four-hour mark of the Mobil 1 Twelve Hours of Sebring Fueled by Fresh From Florida in the No. 52 ORECA FLM09 to give PR1/Mathiasen Motorsports team the five-point bonus toward the $50,000 Tequila Patrón North American Endurance Cup prize at the end of the season.

Montecalvo shares the No. 52 Camp Boggy Creek machine with Gunnar Jeannette and Mike Guasch, who is defending his 2013 PC victory at Sebring. David Heinemeier Hansson was running second in the No. 09 RSR Racing entry to earn four Patrón Endurance Cup points. Heinemeier Hansson’s co-drivers are Duncan Ende and Bruno Junqueira, who qualified on the PC pole.

The Sebring event will pay additional bonus points at the eight-hour mark in addition to the finish.